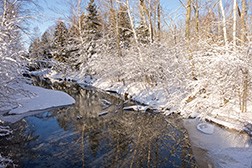 Whitefish Dunes in the winter.

What do dinosaurs, flying porcupines and ancient history have in common? All three will work their way into the Jan. 17 winter program, “Dunes In Winter,” at Whitefish Dunes State Park in Sturgeon Bay.

The event will offer participants the chance to snowshoe into the forested sand dunes, which at 4,000 years old, are the oldest on the property, according to Whitefish Dunes State Park Naturalist Carolyn Rock. While there, snowshoers and hikers will learn about the different types of dunes and how they are formed.

“It’s the opportunity to actually experience the forested sand dunes, which is normally a limited area within the property,” Rock said.

So how do dinosaurs and porcupines make their way into the mix? Rock said the quiet nature of the trek will allow individuals to view birds and their habitats – more specifically, the Pileated Woodpecker, its nests and feeding holes.

“It’s a species of bird that really has some very dinosauric-like traits,” Rock said. 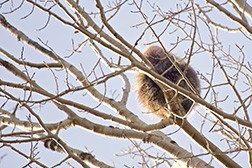 Porcupine in a tree.

Evidence of animals in the winter will also be explored, including the unique nature of the porcupine that, despite having what Rock calls a big and “cumbersome” appearance, does not leave much in the way of tracks on the ground.

Human history on the property will also be discovered through what Rock calls “reading the landscape.”

“It’s a neat perspective,” Rock said of the park in the winter. “It gives you a different view of the landscape. You’re able to see different aspects of the natural world – you can see nests of birds and evidence of animals.

“It’s also neat to see the landscape in the winter time without the leaves,” she adds. “You can really see the rolling dunes, you can see the formations and how they formed, and how the world around us looks. It also gives us exercise and gets us out of our little closeted environment and outside into the natural world.”

While the hike is short in distance, it is vertically challenging with at least a couple sets of stairs involved. Rock recommends participants bring snowshoes, winter boots and walking sticks. A limited number of snowshoes will be available at the nature center.