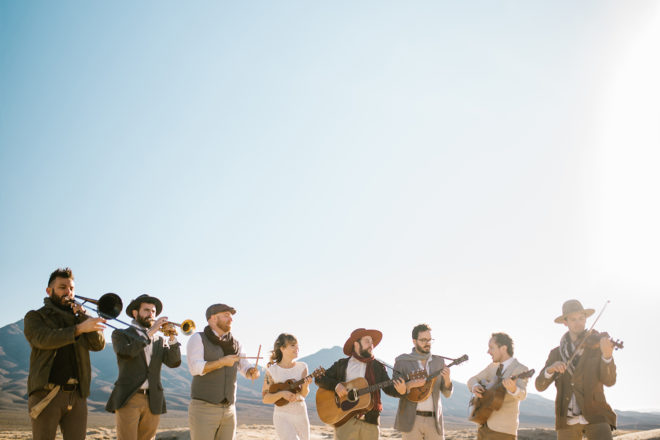 Founded in 2007 by native Chicagoan Zach Lupetin, the eight-piece collection of brass, strings and washboard has gained a reputation as one of Los Angeles’ best live bands, an honor L.A. Weekly bestowed upon the group in 2013 for a sound described as “hot, spontaneous, engaging and, best of all, a pleasure to hear.” Since then, they’ve won Independent Music Awards, opened for the genre-bending Lake Street Dive, and enjoyed a bit of internet fame with their 2015 video “Never Had To Go,” starring then-89-year-old Dick Van Dyke.

It’s an ambitious resumé for a group brought together by a Craigslist ad posted by an L.A. and folk newcomer. Prior to his move west, Lupetin jammed in rock bands through his teen years and college, and had only just begun acquainting himself with the acoustic guitar. A University of Michigan film major, his original intent in southern California was to get his screenplays and theatrical plays read, saving a little bit of time for music on the side.

When his ad pulled in what he was looking for – string and brass players interested in folk, rock, blues, jazz and New Orleans swing – it launched a musical project that has evolved in size and sound through four full-length albums and a tour schedule that has taken them from The Fillmore in San Francisco to Western Norway’s largest music fest, Bergenfest.

For the first several years, they did that under the umbrella of vintage Americana, getting audiences on their feet with their upbeat Dixieland jazz and Depression-era folk songs.

“Sometimes we would sample from different eras,” Lupetin said. “Sort of bring people back in a time machine in a show.”

Since releasing 2015’s With A Lampshade On, the band has pushed beyond the confines of retro Americana in favor of a funkier, more soulful vibe.

“Sometimes when you’re playing music that has a retro feeling like we’ve tried to do in the past, you end up with sort of getting stuck in the past or you get caught in trying to recreate something that’s gone instead of making something new,” Lupetin said.

Their 2017 release, The Dustbowl Revival, reveals a bolder, brighter, roots-infused sound from the very first track.

“The first song, ‘Call My Name,’ is sexier than anything we’ve tried to do,” Lupetin said. “It’s direct and raw and funky and less cute.”

It was a musical vision achieved with the help of Grammy-winning producer Ted Hutt, a founding member of Celtic punk band Flogging Molly and producer for the Dropkick Murphys and Old Crow Medicine Show.

“He really came in and was like, let’s cut to the chase, tell really awesome stories, not show off too much, just really get to the heart of each song,” Lupetin said.

He credits Hutt with challenging his songwriting, encouraging Lupetin to go to a deeper place with his lyrics. The result is a more emotional, introspective album that covers everything from “trying to keep your head up when you’re underwater financially” (“Debtors’ Prison”) to the tongue-in-cheek “Gonna Fix You,” about a man with “a savior complex who thinks he’s going to change this girl and she’s like, get over yourself, basically,” Lupetin explained. The album closes with “Don’t Wait Up,” a story about the cultural calamities that happened during the Civil Rights Movement. They are all stories told with blasts of horns, swaggering vocals, and a whole lot of soul.

“We love their music,” said Door County Brewing Co. CEO/founder John McMahon. “Their style fits the vibe that we have here and their energy level fits our energy level.”

The Dustbowl Revival comes to Door County Brewing Co., 8099 Hwy 57 in Baileys Harbor, on Saturday, Dec. 2. Doors open at 6pm. Show starts at 7pm. Tickets are $20 and can be purchased at doorcountytickets.com.