Chocked full of keeper lore, the little yellow lighthouse on Eagle bluff is beautifully furnished and resplendent in its interior and exterior restoration. Eagle Bluff Lighthouse was not always so glorious. 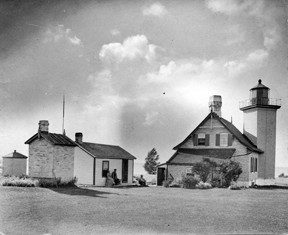 Abandoned as a residential lighthouse in 1926, Eagle Bluff Lighthouse fell on bad times. Roughed up and worn hard, the building was, literally, a mess. Timing is everything, and at the very moment the lighthouse was headed down the road to decay and ruin, the Door County Historical Society (DCHS) came to the rescue. Leaving their white hats at home, a flotilla of volunteers armed with buckets, brushes and brute determination set to work.

Let’s start at the beginning.

In 1868, the U.S. Lighthouse Service responded to requests from local residents to construct a navigational aid on a bluff overlooking Green Bay. The new lighthouse, built for the then-astronomical sum of $12,000, was to protect the Strawberry Islands Channel off the bluff’s shoreline. For the next 58 years, Eagle Bluff Lighthouse, manned by three successive keepers, served as a beacon in the night, guiding vessels to safe haven.

The details of the difficult years of abandonment from 1926 – 1960 are a tangle of dates and misinformation. Though the lamp continued to glow and the building remained under federal ownership, without the benefit of modern utilities there was little interest in using the former living quarters. In the early 1930s, however, the Wisconsin State Conservation Commission (the agency that managed Peninsula State Park) acquired the property as its potential was recognized.

The U.S. Congress authorized a quitclaim deed to the State of Wisconsin and Eagle Bluff Reservation was officially included in Peninsula State Park. The federal government retained access to the tower and lantern, and continued to operate the lamp. In the ensuing years, some attempts were made to maintain the lighthouse, but by 1950 all hopes of occupying the lighthouse were abandoned and the stories of the keepers were shut away behind locked doors and the house grew silent…but not for long.

In 1960, the DCHS was ready to take on a project of historical merit. After some discussion, the group set their sights on the vacant Eagle Bluff Lighthouse. And so it came to pass, following negotiations with the State of Wisconsin and the U.S. Coast Guard, represented by the federal government, the DCHS was granted a lease to restore the lighthouse and open its doors to visitors. The U.S. Coast Guard would retain access to and operation of the tower, lantern and lamp. 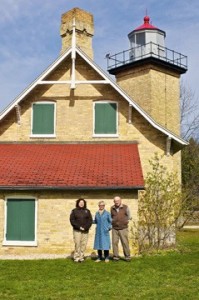 A small, dedicated army of volunteer recruits, Walter Duclon, the only surviving son of the second lighthouse keeper William Duclon (1883-1918), spearheaded the restoration work. According to Lois Hagen of the Milwaukee Journal, Aug. 26, 1964, “Lack of modern conveniences made things difficult for the restoration crew, especially during winter. They brought their own food and heated it on the big old cook stove. Some days it took so long to heat up the rooms that it was mid-afternoon before they could remove their coats.”

Adding to the volunteers’ woes were the vandals who regularly attacked the house. “Once, volunteer Ida Bay arrived just in time to find 18 people lugging off antiques that had just been installed in the lighthouse. Another time donated items that were installed on Saturday were stolen by Sunday,” Hagen reported. In the end, thousands of volunteer hours were donated to the restoration of Eagle Bluff Lighthouse, with an initial expenditure of $3,000.

On Sept. 1, 1963, after three years of dedicated sweat and toil, the restoration was satisfactorily completed and Eagle Bluff Lighthouse Museum officially welcomed visitors for the first time. Waiting at the door was Walter, dressed in a suit and tie; he was 81 years old. Milwaukee Journal reporter Marion McBride noted in her Sept. 4, 1963, article, “Valuable advice has been given by Walter Duclon, youngest of the seven sons of the lighthouse’s longtime custodian. He journeys to the project almost every Sunday.” In the course of the restoration, Walter provided intimate details of life in a lighthouse, stories of mischief – a broken butter churn, as well as a fondness for playing the guitar in his brothers’ popular orchestra.

A leaking roof and tattered wallpaper were just two of many incentives for the final restoration work to be undertaken, and in the past four years all lingering projects have been completed. Today, Eagle Bluff Lighthouse is once again a proud reminder of the courage of the keepers who manned the light through many a dark and stormy night. McBride also reported, “The lighthouse is believed to be the only one being restored in the country.”

We may never be able to substantiate that fact, but as DCHS board president George Evenson notes, “The DCHS has provided leadership in saving the Eagle Bluff Lighthouse and countless volunteer hours were invested in bringing the old building back to life. We have been good stewards of this landmark for 50 years, always adhering to our pledge of historic accuracy. Our staff provides our guests with the high standards of information. Visitors leave the lighthouse with a clear picture of the hardships and responsibilities of the early keepers.”

Eagle Bluff Lighthouse will host a 50th anniversary celebration on Sept. 1, 10 am – 5 pm. Tours will be available every half hour through 4 pm; adult admission is $5. A vehicle sticker is required for park access. For more information visit eagleblufflighthouse.org.