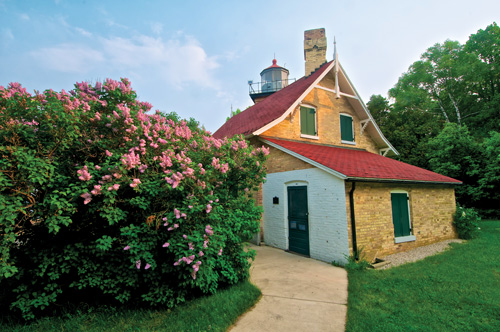 Eagle Bluff Lighthouse is available for tours in summer and fall. Photo by Len Villano.

Sitting high on the bluffs of Peninsula State Park, right off Shore Road, Eagle Bluff Lighthouse is the perfect destination for a blend of beautiful views and local history. While driving (or hiking or biking) along Shore Road’s winding, sun-speckled path, be on the lookout for bright wildflowers and softly stepping deer. In late May and early June, the scent of lilacs wafts in the breeze while the sound of lapping lake waves provides a soothing soundtrack.

After the three-mile trek uphill, the green lawn of the Eagle Bluff Lighthouse provides a perfect picnicking spot. And even before climbing up to the house’s light, observe that the view of Strawberry Channel and Chambers Island from the ground is worth the trip in itself. What really makes a journey to the lighthouse special, though, is a tour: it’s the first lighthouse in the nation to be turned into a museum. Tours run daily on the hour and half-hour, 10 am – 3:30 pm.

Eagle Bluff Lighthouse is unique, said site manager Linda Faust, because of its history. In fact, she said, “Eagle Bluff Lighthouse is known as the lighthouse with a story.” She means the history of the building itself, but perhaps more poignantly, she also refers to the stories of the keepers who tended to the light, raised families in the house and explored the surrounding landscape for 58 years. There have been three keepers, but one family in particular infused the lighthouse with much of the lore and legend that visitors see and hear about today.

Civil war veteran Captain William Duclon and his wife, Julia, tended the lighthouse and raised their seven sons at Eagle Bluff over 35 years in the late 1880s and early 1900s. The boys were homeschooled in the lighthouse and read books that arrived regularly courtesy of passing ships. And Julia was determined to give her children a musical education in addition to a traditional one. Although Captain Duclon wasn’t as enthused about music as his wife was, the boys apparently were, and they formed their own band. Faust said that the boys of Baileys Harbor hated when the band performed in town because all the girls were infatuated with the seven Duclon boys.

After touring the lighthouse, visitors can engage with the history of Eagle Bluff by taking a nearby trail, Trail Tramper’s Delight, down to Nicolet Beach. According to Faust, the Duclon boys first forged the trail to reach their favorite fishing spots. She also described how, as teenagers, they were quite the young entrepreneurs, establishing their own fishing company during the summer and forming a team of first responders in the winter.

Life at the lighthouse certainly wasn’t easy, however. The boys’ chores included a daily trek down to the lake, by 77 steep steps, to fetch buckets of water. Captain Duclon even fashioned a wooden yoke – currently on display in the lighthouse museum – to make carrying the water buckets easier for his eight-year-old son, Walter.

Walter, the youngest, was in his eighties when Eagle Bluff Lighthouse was restored in 1960 after a long period of disrepair. Working with the Door County Historical Society, he offered great assistance to the project by re-creating what the lighthouse looked like when he was a boy. He donated many original pieces to the museum and helped to locate antique furnishings that were, as Faust put it, “just like his mom’s.”

Because of Walter Duclon’s input and personal involvement with the restoration, the Eagle Bluff Lighthouse possesses an authenticity and charm that visitors can experience today.