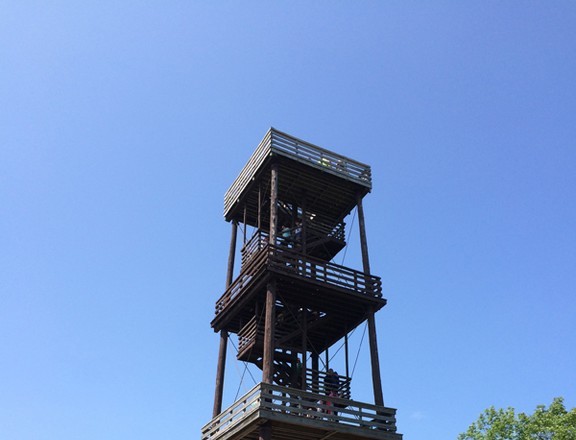 The deconstruction of Eagle Tower in Peninsula State Park will be delayed until mid-September, according to a press release from the Department of Natural Resources (DNR). The DNR originally scheduled the razing of the tower for this month but the company the DNR had contracted to do the work could not fulfill the contract.

“We had a contract signed to do deconstruction and the contractor had some issues with obtaining the equipment,” said Ben Bergey, director of Wisconsin State Parks. “We had more than one bid on the project so we have secured a contract with the next business and are proceeding with that group to get the work done.”

Bergey said the delay did not have to do with funding or apprehension about closing the road during peak tourist season.

Funds for the deconstruction are being paid for by the DNR with money allocated for capital development within the state park system. The funds are not coming from the separate Eagle Tower Fund set up by the Friends of Peninsula State Park to rebuild the tower.

Despite the two-month delay in deconstruction of the existing tower, the goal of opening a new tower by the end of 2017 has not changed.

“This isn’t a big deal because the tower standing there isn’t preventing us from moving forward with everything else,” said Bergey.

The DNR plans to rebuild the tower to look as similar as possible to the current structure while complying with building codes and the Americans with Disabilities Act. The tower will be taken down in sections while trying to salvage the wood to be reused in the rebuild. The United States Department of Agriculture’s Forest Products Lab will assess the wood to determine what can be reused.

The deconstruction of the tower will require a rerouting of traffic on Shore Road near the tower and closure of some trails near the site.