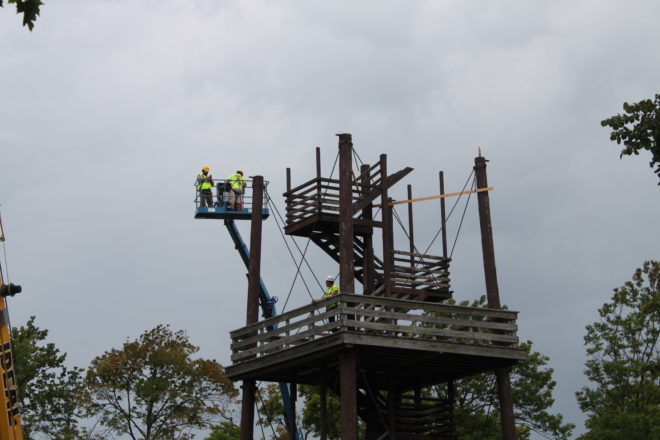 Deconstruction of Eagle Tower began on Monday, Sept. 19, and lasted until Friday, Sept. 23. Although the tower was completely taken down by Tuesday morning, the site remained closed as the Department of Natural Resources (DNR) removed the wood pieces and cleared the site.

The deconstruction crew took the 84-year-old tower down in three stages, rigging a crane to support each of the three terraces while workers sawed the support beams just beneath each terrace. Once detached, the crane lowered the terrace to the parking lot below and crews further dismantled the wood to be hauled off to a holding location in Peninsula State Park.

“It went a lot quicker than anticipated,” said Missy Vanlanduyt, capital development coordinator with the DNR. “The contractors, it took them about five hours to get set up and it was really slow and then all of the sudden it started coming down. Before you know it, through downpouring rain and lightning, they happened to get the entire tower on the ground.”

The DNR tried to keep the largest wooden members intact to be reused in the reconstruction of the tower, which is expected to begin in 2017.

“First they took all the collars off and all the bolts out so we’ve got all the metal in one area,” said Vanlanduyt. “We’re going to move [the wood] to a secure non-public area of the park.” 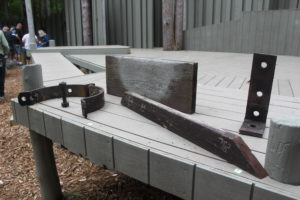 A step, railing and brace from the deconstructed Eagle Tower were on display at a public information session on Sept. 20. Photo by Jackson Parr.

At that time, Bob Ross, research engineer with the U.S. Forest Service, and his team will assess each piece of wood to determine what can be reused and what pieces have deteriorated too much. Vandlanduyt said this will be another time for public access and education.

While some portion of the tower will be reused, the DNR will repurpose other pieces of the tower’s wood as a fundraiser to reach the $750,000 estimated price tag for the rebuild.

The DNR paid for the deconstruction of the tower through the capital development fund. The cost for reconstruction will fall on donations managed by the Friends of Peninsula State Park.

“The question that comes up is, ‘Why can’t the state just pay for it?’” said Representative Joel Kitchens at a public information meeting in June. “Through this process some groups felt raising the money locally was the way to go. Certainly it will happen a lot more quickly than if we have to go through the state budget process and this way we’ll have more local control over it.”

Friends groups have a special relationship with the DNR when it comes to the state park they support. They sign an agreement with the DNR to maintain 501(c)3 status and they become the first group the DNR approaches when addressing something in the park. While the DNR has less flexibility when it comes to things like soliciting donations and communication, the Friends group can act as a separate local entity on the outstretched arm of the DNR.

“The Friends and the Eagle Tower Fund Committee are raising the funds and they are donating them back to the department and then we’ll hire the engineer and execute it,” said Vanlanduyt about the movement of donated dollars.

The first fundraising goal is $50,000 by Oct. 15, allowing the DNR to find a contractor and begin design plans. The Friends have already raised approximately $32,000 and have an additional $10-15,000 in pledges, which Campaign Director for the Eagle Tower Fund Committee Rachel Stollenwerk hopes will come in by the end of the year. 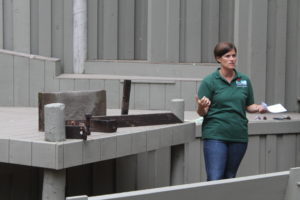 Missy Vanlanduyt, capital development coordinator for the Department of Natural Resources, stands next to pieces of Eagle Tower as she explains how the tower was taken down. Photo by Jackson Parr.

“We’re starting down the design process and what building codes are necessary and ADA compliance,” said Vanlanduyt. “The department is committed to putting a new structure there. We want this next one to last a lot longer.”

A big fundraising method the Friends hope to capitalize on is the sale of pieces of wood from Eagle Tower.

Since Eagle Tower is the property of the DNR, the department must sell the wood to the Friends group to be used as a fundraiser.

“We’re working with our legal department to figure out how to do that,” said Vanlanduyt. “It’s state property so there are certain procedures we have to follow.”

The determination of price for the sale of DNR land relies on appraisal and comparable sales data, but Vanlanduyt did not know how that transfers to the sale of real property such as the wood from the tower.

Once the Friends get a hold of the wood, the Eagle Tower Fund Committee will create a subcommittee to determine how to repurpose it. While many have approached Stollenwerk asking to purchase portions of the wooden tower, others suggest repurposing the wood as benches and monuments in memory of the old tower.

“That’s been our biggest question, ‘Can I have a piece of the wood?’” said Stollenwerk. “We hope to get something in place with the DNR so we can obtain the wood and put together a fundraising event.”

Vanlanduyt hopes the DNR will have a rendering of the tower by mid-2017 after public input sessions, but said it will be dependent on the extent of the design process and the progress in fundraising. 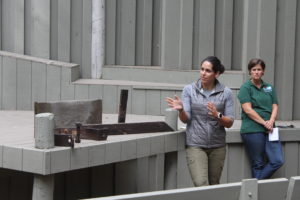 Rachel Stollenwerk, Campaign Director for the Eagle Tower Fund Committee, stands next to pieces of the deconstructed Eagle Tower as she explains the fundraising process to reach the $750,000 goal. Photo by Jackson Parr.

Vanlanduyt noted that offering naming rights to donors is illegal within the DNR and individual state parks cannot change their user fees to cover costs, as park use fees are dictated by state statute.

According to Peninsula State Park Superintendent Kelli Bruns, the park routinely sees 1.3 million visitors each year, with June and July of 2016 being the busiest months in 20 years of record keeping.

Stollenwerk said the initial goal of the fundraising effort was awareness and outreach during the busy season on the peninsula.

“Due to the seasonality and the political interest and media outlets, we decided to really focus on the awareness aspect,” said Stollenwerk. “Now that the quiet season is coming into fruition, we’re going into our quiet plan of our fundraising which is looking for grants and larger donors.”

For questions or comments on donations to rebuild the tower, visit eagletowerfund.com or contact Campaign Director Rachel Stollenwerk at [email protected].