The future of Eagle Tower was again a hot topic in 2017.

The Wisconsin Department of Natural Resources (DNR) chose a design that includes a canopy walk up to the top of the tower at a height of 65-feet. The choice keeps with standards set forth by the Americans with Disabilities Act (ADA). Ben Bergey, Wisconsin State Parks system director, said the department will explore the possibility of extending the height to 75-feet, the height of the deconstructed tower.

That design was preferred by a majority of the 650 members of the public who commented on three design options. The DNR hopes to break ground in November, but that will require closing a $700,000 fundraising gap.

The chosen design comes with an estimated price tag of $2.1 million.

Fundraising gained steam this year with approximately $650,000 in private donations secured toward a $750,000 goal. In addition, the state kicked in an additional $750,000 in matching funds.

A major driver for the fundraising efforts was the first sale of wood from the deconstructed tower. Donors purchased wood that has been repurposed by local carpenters and artists or in its original condition, giving the public the opportunity to own a piece of the historic structure. Sale of the old Eagle Tower wood will continue through an online auction into next year.

Shipwrecked Brew Pub – the oldest extant craft brewery in the county – was celebrating its 20th anniversary this year when a fire  Aug. 20 destroyed the iconic building in the Village of Egg Harbor. Thankfully, no one was injured, and the Pollman family is rebuilding and will have a brand-new Shipwrecked open for the 2018 season.

In other developments related to alcohol on the peninsula:

In mid-February a joint meeting of Door County’s Board of Health and Land Conservation Committee was convened specifically to discuss a Department of Natural Resources permit renewal for Door County’s only CAFO, S&S Ag Enterprises. Residents of both Door and Kewaunee counties attended the meeting to voice their concerns about CAFO expansions. Many of those same concerns were aired at the March 2 DNR hearing in the Town of Forestville.

Sadly, 2017 brought us several reminders of the need to think safety first when recreating in Door County.

In August, Joseph D. Quagliano parked his truck at the Nicolet Bay Boat Launch and launched his kayak for a paddle around a bay packed with boaters, swimmers and kayakers enjoying a beautiful summer day.

The 20-year-old man presumably aimed for Horseshoe Island, as many kayakers do. He left his cellphone, and more importantly, his life jacket behind. Three days later, his body was recovered just 100 yards from Horseshoe Island.

Quagliano’s drowning was one of several preventable deaths that occurred as people pursued recreational activities in Door County this year.

Quagliano was one of three people to die kayaking in the waters of Door County this year, all of whom were not wearing personal floatation devices. Mathew Alan Tauferner of Sturgeon Bay and Dylan Dohr of Clintonville died when their kayaks capsized near Cave Point on April 28.

“A tragedy like this brings to the forefront the personal choice you have to make when out on the water,” Tim Pflieger of the Door County Adventure Center told Pulse writer Jim Lundstrom after the incident. “Are the conditions right for me to paddle in and paddle out? Do I have the right craft and do I have all the right safety gear with me, including a flotation device so if the worst occurs, I have the chance to walk out or paddle out of the situation?”

In February a snowmobiler, Kelly Giese, of Casco, was killed when she was thrown from a snowmobile and hit a tree. She was not wearing a helmet.

Door County also saw a tragedy on the roads this summer as cyclist Lou Branham, 74, was killed when she was hit by a linen van July 22.

Branham was near the end of a 60-mile ride when she approached the intersection of Juddville Road and County Highway A, a notoriously bad stretch of road that is included on the official Door County Bike Route. Branham’s GPS recording showed that she slowed to nearly a stop before continuing onto County A, indicating that she may never have seen, or misjudged the speed, of the van cresting a hill just to the north of the intersection, where the speed limit is 55 miles per hour.

Outdoor recreation has become an increasingly large part of Door County’s draw to visitors and residents, making safe riding, driving and paddling more important than ever.

What Was (and Wasn’t) Built This Year

The Egg Harbor Library and Community Center broke ground in February and is expected to be near completion by the turn of the new year. It was likely the largest new construction that took place in the county this year.

The $6.5 million project was a bargain for the village, with $5 million of that cost coming from private donations. But that relatively low cost still did not come without turbulence.

As Boldt Construction began preparing the site for construction, a group of local residents sued the village for violation of its own ordinance, which stated the village had to go to referendum before approving project costs of $1 million or more. The village did not endear itself to the concerned residents when it wiped that ordinance off the books at its next meeting, but Circuit Court Judge Todd Ehlers did not stop construction.

Meanwhile, construction in Sister Bay did not materialize as was expected. While CHOP and a mixed-used development on Mill Road across from the beach wrapped up their projects, other projects that were supposed to begin have been quiet.

Most notable is the stalled Stony Ridge development on Highway 57 south of downtown. The site was supposed to include nearly a dozen single-family homes, apartment buildings and garages, but just one has been constructed. Project developer Keith Garot continued to default on his development agreements with the village, and the property management firm Pre/3 is now looking at taking over construction of many of the buildings proposed for the site.

Six single-family homes on the site of the old school off Highway 57 overlooking the village also have yet to materialize, although utility and infrastructure work is underway.

The one place where a big construction project has gone off with hardly a hitch is The Bay Lofts apartment complex on Sturgeon Bay’s west side. The 35-unit complex offers studio, one-, two-, and three-bedroom apartments priced between $900 and $1,800. 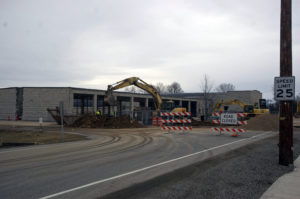 The building also houses Bay Shore Outfitters in its ground floor commercial space. The city hopes the complex will help satisfy the need for workforce housing in the area.

By the end of this year, Door County’s new senior resource center and Emergency Service Department should be ready for business in their new $8.1 million building on 14th Avenue in Sturgeon Bay.

The fate of the west waterfront redevelopment effort dominated news in the City of Sturgeon Bay once again in 2017.

In February the dispute between the Friends of Sturgeon Bay Waterfront and the city over the fate of two parcels of land next to the Door County Maritime Museum went to court. Judge Raymond Huber issued an injunction on development of the parcels until a final ruling on the location of the Ordinary High Water Mark (OHWM) could be determined.

The Friends contend that since the land is filled lakebed it falls under the public trust doctrine and is not be eligible for private development, which would be a big blow to the Waterfront Redevelopment Authority’s (WRA) effort to redevelop the area.

In April the Department of Natural Resources issued a preliminary determination that placed the OHWM in a position that allowed for Bob Papke’s Sawyer Hotel. The Friends group petitioned for a declaratory ruling, leading the two sides to pursue mediation to reach a settlement out of court.

In May the city finally had good news to celebrate, as The Bay Lofts apartments opened on the west side, part of the west waterfront project. But that news was soon drowned out when Fire Chief Tim Dietman issued an emergency order to bar access to the Teweles and Brandeis Grain Elevator on one of the parcels, which he declared a health and safety hazard. That led to the city pursuing estimates to raze the granary as citizens rallied to save it.

The two sides agreed to meet to mediate the dispute with a city-selected facilitator and reached a settlement in June, three days after Papke announced he was pulling his hotel development and suing the city for $550,000 in expenses he incurred in planning. Papke argued that the city entered into an agreement with him without divulging its knowledge that it could not obtain clear title to the property for private development.

Though city representatives and the Friends Group reached a settlement agreement in June, the city and Waterfront Redevelopment Authority stalled action on the agreement until late July, with the WRA eventually rejecting the settlement and the city approving it. That meant that the declaratory ruling process would continue, with a hearing in September.

As the year comes to a close, both sides anxiously await the DNR’s ruling on the OHWM, the future of the Granary remains in flux, Papke’s lawsuit is moving forward, and the fight that has engulfed the city for three years shows no signs of coming to an end.