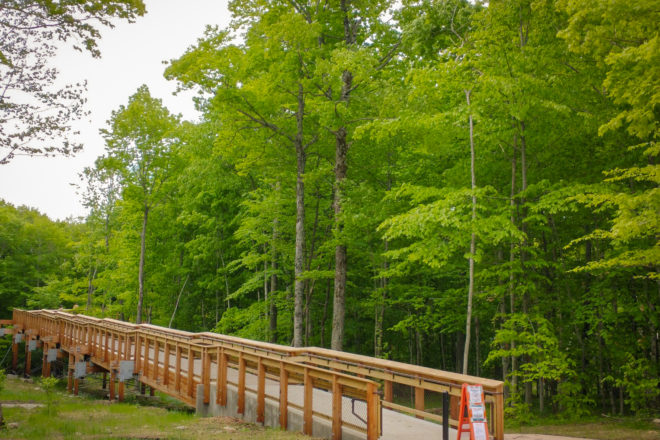 The ramp invites visitors to lose themselves in the trees. Photo by Jessica Gatzow.

When I visited Peninsula State Park for the first time in the summer of 2015, my parents were excited to show my sister and me the famous Eagle Tower. They recalled how a hike up the tower revealed a brilliant, panoramic view of the park and the islands across the bay. After a winding drive through the park, we arrived at the base of the stairs, only to find a lock and chain blocking the entrance. I missed climbing the tower by mere months.

Six years later, that tower has been taken down because of safety concerns, but a new one reaching 60 feet into the sky greets visitors. The state’s Department of Natural Resources required the new tower to meet the accessibility requirements of the Americans with Disabilities Act, so it offers two paths to the top: a traditional staircase like the original tower had, and a ramp that loops through the trees before meeting the stairs at the top.

Now people in wheelchairs, families with small children, or anyone who’s looking for an easier climb can reach the top of Eagle Tower. The new tower is 15 feet shorter than the original, but taking the ramp rather than the traditional stairway ascent offers a new experience that’s just as memorable.

The accessible ramp attracts all visitors, inviting one to literally walk through the trees all the way to the canopy. At the entrance, the ramp appears to disappear into the park before looping back toward the bay.

Walking up, I felt as though I could take in the surroundings constantly, without the obstruction of wooden beams and steps above my head, so the journey – not just the views from the top – is now part of the experience. The ramp is wide enough to step off to the side to take in the view for as long as you want without blocking the path for others. Benches also divide some sections of the railing along the way.

Once the ramp path twists up to the final platform, visitors can appreciate the views of Nicolet Bay and Horseshoe Island to the north, and Eagle Harbor to the east. On three sides of the tower, I remained surrounded by a sea of green because beech, sugar maple and basswood trees dominate the park. I could imagine how the old tower offered a similar panoramic view of the treetops and water, and this final, iconic view from Eagle Tower still makes a great photo op.

I descended the tower by the traditional winding staircase and saw evidence of more work to come. Beneath the ramp, the ground was blanketed with grass seed to restore the construction area with native plants, including forget-me-nots in pockets of blue flowers that were reminiscent of the expansive water view from the top.