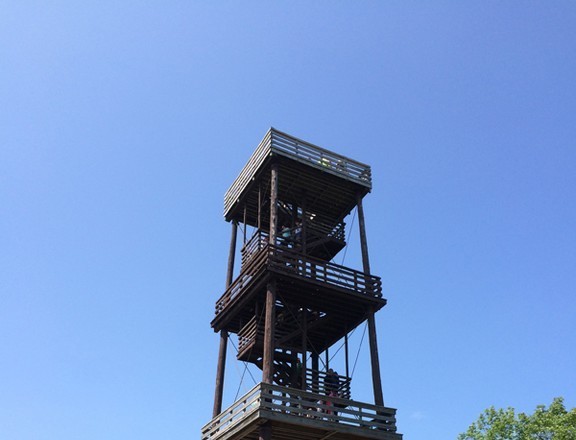 When Eagle Tower was closed last May for structural concerns, followed with a recommendation that the tower be torn down, the public held its breath. Then in September park officials said the tower will most likely be taken down in the fall and all hope seemed lost.

Now, after a peer review of the original structural condition report, the tower may be kicking to life again.

The Wisconsin Department of Natural Resources (DNR) hired MSA Professional Services to review the original report conducted by EDGE Consulting that called for the tower to be razed. While MSA found the original report “compelling,” they also found some overblown assumptions regarding the live load (people climbing the tower) at any one time.

“I take no issue with their Structural Modeling approach,” wrote Senior Structural Engineer David Wickersheimer in the peer review, “however I do question the total application of occupancy live load on all levels and all stair stringers and landings at the same time.”

Wickersheimer is referring to the pounds per square foot (psf) that EDGE used from traditional building code. He believes they don’t apply as well to a unique structure such as an observation tower.

“To achieve 100 psf, bodies would have to be standing tight against each other, occupying 1 foot by 1.5 foot and weighing 160 pounds. That would mean at the top level, which is 18 feet square, 189 people squeezed together. How realistic does that sound?” said Wickersheimer.

Even during the busiest summer weekends, it is unlikely or impossible for 189 people to stand on the top tier of Eagle Tower at the same time.

EDGE said they drew this occupancy conclusion from discussion with the park staff, but Wickersheimer believes that park staff might not have known what the question was.

“Maybe they did not understand that EDGE was loading every level, stair and landing with 100 psf simultaneously,” said Wickersheimer.

The report from EDGE also stated that the diagonal rods are overstressed under full wind loading. Wickersheimer calculates that full wind loading for the tower is 90 mph. According to the National Weather Service, wind speeds in Door County have only reached 90 mph once, on June 22, 1988 when gusts reached 105 mph.

Jerry Leiterman, region program manager for the Northeast District of the Bureau of Parks and Recreation, said that peer reviewing a structural condition report is not common practice for the DNR.

“Because of the fact that there is a lot of interest in the project, locally and statewide, the department has taken one step further and done a peer review,” said Leiterman.

The original report and its peer review have equal weight as part of the information gathering process as the master plan for Door County parks is set to open in the next few months. The decision on Eagle Tower will be included in this county-wide master plan, which will set the agenda for all 21 public properties operated by the DNR, including the five state parks and two wildlife areas.

“We are hopeful to provide additional info so when we do get in the process, when we start engaging the public, we can have this background info on what is the best way to manage the future of the tower at Peninsula,” said Leiterman.

Wickersheimer’s review concludes that the original report does make a convincing argument to close and raze the tower, but it also opens the door for further discussion, especially on realistic occupancy numbers.

“I would have no alternative but to agree with [EDGE], except for the difficulty with the application of the 100 psf live load for this type of structure placed everywhere simultaneously on the computer model,” wrote Wickersheimer. “The idea for repair may seem far-fetched, but not so if local officials can be made to see the logic of my occupancy live load argument.”

When the DNR opens the master plan for Door County, they encourage public input on all considerations, including what to do with Eagle Tower. The plan is expected to open for public comment in early 2016, but preliminary materials can be found on the Wisconsin DNR website (dnr.wi.gov) under a search for Door County Planning Group.