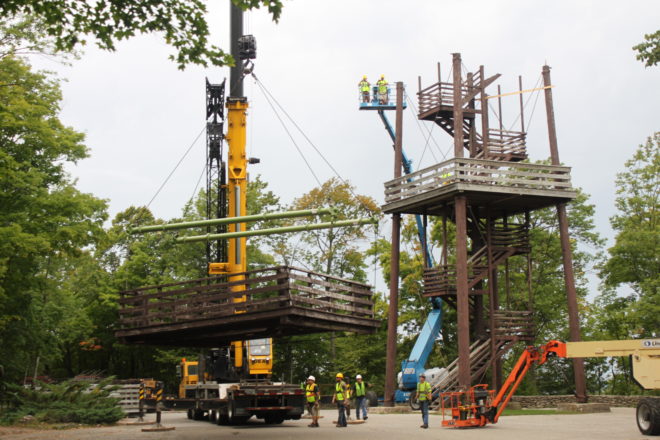 Deconstruction of Eagle Tower began Sept. 19 and is expected to be complete by Sept. 23. The tower has been closed since May 2015. Photo by Jackson Parr.

Barely 12 hours before deconstruction of Eagle Tower began, authorities climbed to the top with infrared cameras in their search for a plane crash that occurred in Peninsula State Park on the night of Sept. 18.

“We did use the tower last night,” said Paul Holtan, Public Affairs Manager for Wisconsin State Parks, in an interview Monday morning. “They were using the tower and infrared cameras and they were up for about ten minutes before the crash was discovered.”

Standing on top of the tower with handheld infrared cameras, authorities began ruling out possible locations of the crash while determining whether it happened on land or water. 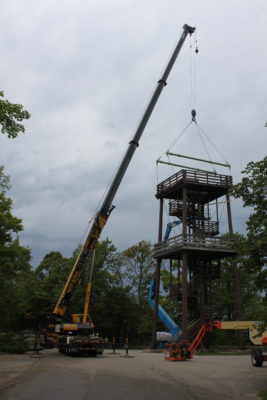 Deconstruction of Eagle Tower in Peninsula State Park began Sept. 19 and is expected to be complete by Sept. 23. Photo by Jackson Parr.

A local resident on the bicycling trail discovered the crash site and notified authorities on Sunday night.

Search and rescue personnel were the last people to climb Eagle Tower before construction crews began deconstruction on Monday morning.

The deconstruction of Eagle Tower began on Monday, Sept. 19 and will run through Friday, Sept. 23. The Department of Natural Resources (DNR) originally planned to deconstruct the tower in July but the project was delayed when the contractor had issues obtaining the equipment to take the tower down.

The plane crash that occurred will not delay the timeline for deconstruction. Missy VanLanduyt, capital development coordinator with Wisconsin State Parks, said the crash resulted in the closure of Highland Road, which was originally going to be used as an exit road during the deconstruction, but she does not expect any impact on the tower deconstruction.

At a June meeting, Ben Bergey, Director of Wisconsin State Parks, said the tower will be taken down in sections and the wood will be assessed for reuse during construction of the new tower.

In October, after the tower is taken down, the DNR will seek proposals for the site plan and architectural design of the tower. Bergey hopes the tower will be reopened in the fall of 2017, but that date is dependent on fundraising coordinated by the Friends of Peninsula State Park.

The Friends are looking to fundraise $750,000, the estimated cost of rebuilding the tower. The group hopes to raise $50,000 by October 15 to be used in selecting an architect and designing the site plan.

Sections of Shore Road leading to Eagle Tower are closed through Friday, Sept. 23. The Eagle and Minnehaha hiking trails are closed for the week as well as a portion of Sentinel Trail.

For questions or comments on donations to rebuild the tower, visit eagletowerfund.com or contact Campaign Director Rachel Stollenwerk at [email protected]