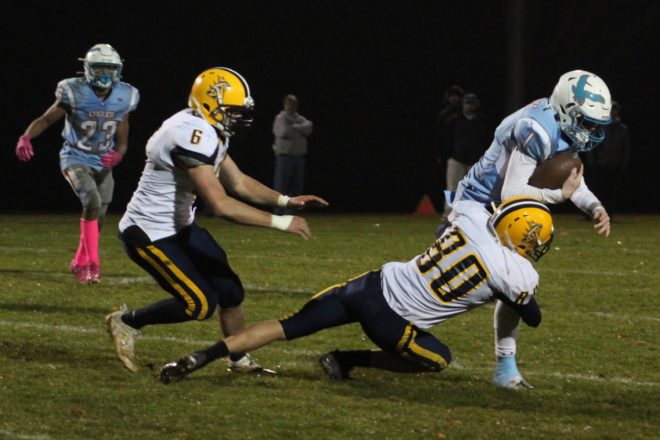 After a fumble on the opening kickoff led to giving up a touchdown Friday night, top-seeded Southern Door did the rest of the scoring to dominate its second-round WIAA Division 5 football playoff game at home against the No. 5-seeded Chilton Tigers.

The Eagles started the game trailing by a touchdown before they ended up winning, 34-7.

Chilton took a 7-0 lead with 7:45 left in the opening quarter on a 1-yard quarterback keeper by Max Mueller and the subsequent extra point.

Southern Door tied the game at 7-7 with 10:52 left before halftime with a 1-yard run by its quarterback, Drew Daoust, and the extra point by Jack Peterson.

After the Tigers fumbled the ball near midfield, a 50-yard touchdown pass from Daoust to Taylor Schaefer put the Eagles in front to stay.

Southern Door stopped a Chilton drive late in the first half when Christian Counard intercepted a pass, then the Eagles closed out the half driving 98 yards, capped off with a 33-yard touchdown pass from Daoust to Peterson for a 21-7 lead at intermission.

Southern Door added two second-half touchdowns with a 31-yard run by Zack Lynch and a scoring strike from Daoust to Derek Schinktgen.

The undefeated Eagles advance to the third round of the playoffs for a rematch Nov. 4 against the No. 2-seeded Kewaunee Storm, which won its second-round game at home Friday against Kiel 27-13.

The Storm’s only loss this season was Oct. 7 at Southern Door, which won that Packerland Conference contest 19-14 and went on to win the outright league title.