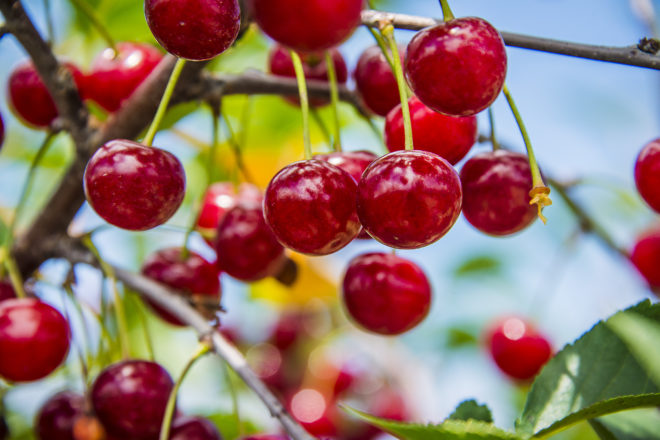 Cherry season is here, and at Robertson Orchards in Sturgeon Bay, it’s earlier than ever.

“As far back as I can remember, I cannot remember having sweet cherries as early as the Fourth of July,” said owner Skipp Robertson.

“It’s not crazy early,” he said – but it could have been much earlier.

“We started off extremely early, and then we cooled off,” Seaquist said. “And everything slowed back from almost being two and a half weeks early. It ended up being not as [early] as it looked like at first.”

Cherries aren’t the only crop that’s knocking on the door before the expected time.

“Almost all crops seem to be early this year,” said Becky Wiepz, superintendent of the Peninsular Agricultural Research Station. “The warm and dry weather throughout the beginning of the season caused crops to mature quickly.”

The slightly early start to the season at Seaquist this year is a contrast to what the orchard operation has experienced in recent years.

“In 2020 and 2019, we were extremely late and cold,” Seaquist said, “so we were harvesting beyond the 15th of August even, which is really abnormal for us.”

Both Robertson and Seaquist say that earlier seasons are good for business.

“It’s always nice when we have cherries for the Fourth of July,” Seaquist said. “From the Fourth of July to the end of July is the busy season, and once you get mid- to later in August, you have people heading back for school. So it’s good for us when it is earlier – for just the retail side.”

When it comes to the pick-your-own business, the pandemic had a big effect. With the emphasis on outdoor activities last summer, Jenna Kasten of Robertson Orchards said, “Everyone came to pick-your-own farms. What normally is a five- to six-week season was a three-week season last year,” she said.

Although Robertson doesn’t know what to expect this year, he said that when his orchard runs out, he’ll refer people to other orchards that are still open.

“If we run out of cherries, there are still plenty of other orchards that will have them farther up in the county,” he said.

Seaquist expects his orchard to have cherries through the first week in August.