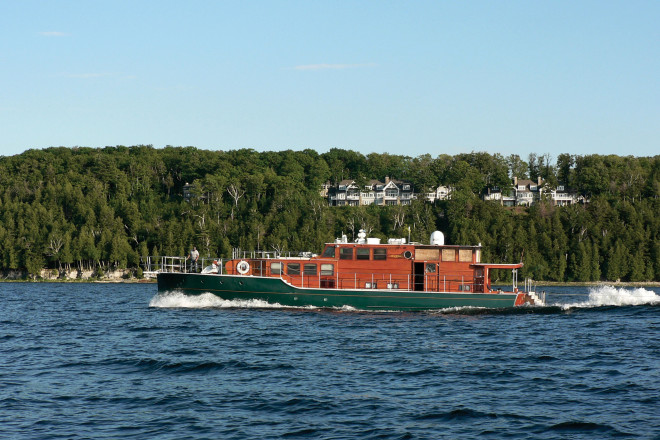 While many boat yards throughout the country are morphing into private marinas, Yacht Works of Sister Bay has expanded its services to accommodate larger scale restoration projects. One such project underway is the restoration of the classic motor yacht Sea Spray.

Rolling full steam ahead last winter and spring, Yacht Works has been rebuilding much of Sea Spray, a double plank on frame, hardwood mahogany classic commuter yacht which dates from the golden age of East Coast yachting. 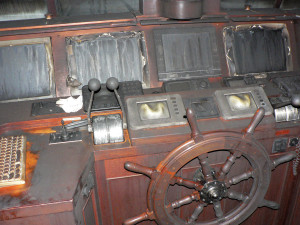 What brought Sea Spray’s owner and Yacht Works together was a four-alarm fire at a Skipper Bud’s storage facility in Winthrop Harbor, Illinois. The fire, which nearly destroyed the 75-foot Sea Spray, consumed 60 out of 110 boats. The blaze was started through a faulty electrical system on a smaller boat in the storage facility. Three vessels were reportedly swept up and thrown into a dumpster as a result of the inferno’s high heat.

Sea Spray’s owner was left with two choices:  scrap the vintage yacht and take the insurance money, or rebuild her from the decks up. For the owner, who admires works of art, scrapping such a vessel was not even a consideration. When seeking a yard that could handle a major refit of what essentially is a floating antique, the choice wa 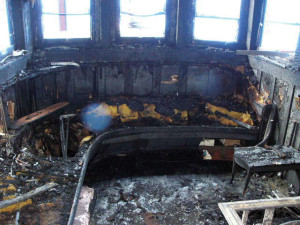 s Yacht Works Inc. of Sister Bay, Wisconsin. Not being content with a mere restoration of the vessel, the owner took this opportunity to raise and expand the aft cabin which will enhance the boat’s living accommodations.

Known as one of the limousines of the sea, Sea Spray’s design came out of an era of commuter yachts that brought wealthy business owners to work each day in downtown Manhattan. The Long Island real estate boom of the 1920s allowed privileged businessmen and their families to live apart from the hustle and noise of New York City. The commuter yachts not only eliminated a long train trip to the city, but also they afforded their owners privacy. Commuter yacht owners commonly took their breakfast on their hour trip to the city and unwound at day’s end with a cocktail as they read the daily paper or tied up unfinished work. Throttling up at full speed, commuter yachts were likened to torpedo boats of the day, roaring through typically calm waters at aggressive paces. 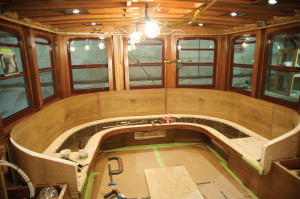 Built at the East Coast Consolidated Shipyards in 1937, Sea Spray’s design reflects an age of a bygone era. Glistening high-gloss varnish accentuates her larger cabin house giving way to a spacious foredeck, easily accessible for sunning and relaxing. From this vantage point passengers may feel they are shipboard as they lean on high railings and watch the sea skim by at 22 knots. Easy access to all exterior decks is made possible by side decks that comfortably wrap the vessel.

Sea Spray is painted in a rich, elegant green which complements the varnished mahogany cabin. Her lines are clean and much of the cabin top is free of the typical clutter that makes up the storage area of so many modern yachts. But don’t be fooled. Sea Spray is far from spartan. Her vintage décor is enhanced with amenities you could expect to find on a new yacht. The boat’s electronics package includes everything from satellite phones to television receivers, state-of-the-art computer navigation, and stereo systems, as well as fax machines and printers. She has everything to make for a comfortable cruise for six guests and a complem 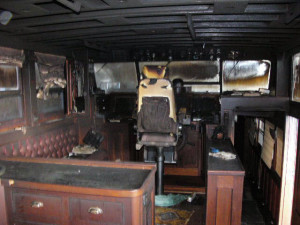 ent of two crew. Accommodations include one cabin with a queen-sized berth and two cabins with double-sized berths.

Her draft of five feet and narrow beam of fourteen make her manageable when seeking dock space, even in smaller marinas. She is soundly built and her double-planked mahogany adds to her heavy displacement of 66,000 pounds. Twin diesel Caterpillars power her at a cruising speed between 19 and 22 knots. Though she spent her early years primarily on the East Coast, she has been cruised and chartered by the current owner in near coastal Florida and the Bahamas during the winters, with summers spent in Chicago. In 2000, the vessel underwent a refit in Florida. Much of her hull was brought down to the nails and new planking was added, giving her another lifetime of service. Tragically, she only had eight years before fire damage brought her to her second refit at Yacht Works. 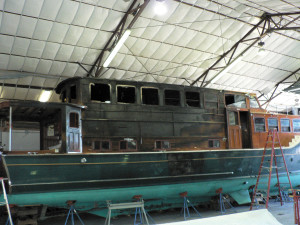 Although the project is the yard’s largest refit in the company’s history, Yacht Works’ reputation precedes itself for quality craftsmanship and restoration services. In addition to growing the yard into a larger brokerage and service facility, Yacht Works President Russ Forkert has a wealth of hands-on experience refitting yachts from the keel up. Forkert took time out of an increasingly hectic schedule to work as a shipwright alongside his brother Roger Forkert. The work continued through last winter and into the spring, requiring an array of assets from naval architects and engineers, to shipwrights, electricians and varnishers. At the time of this writing, the launch date was set for mid-October and Yacht Works was well underway in the 14-month project of reconditioning this once pristine and stately vessel.

Although the yard has been involved in many restoration projects in the past, what sets this refit apart is the scope of the project in sheer magn 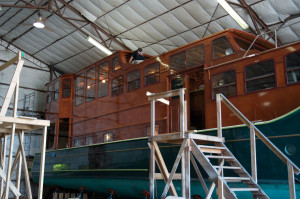 itude. Ten thousand man-hours over a 14-month timetable kept several people busy throughout the end of 2008 and much of 2009. For the owner, this was an opportune time to complete the additional work to bring the yacht to full functionality with added living space.

Yacht Works general manager Rich Larsen initially supervised the Sea Spray project. Larsen has spent years refitting and altering boats and is a natural for directing such work. He describes the project’s two phases:  the first being the restoration and the second consisting of the significant alteration of the aft cabin. Initially, the first step was to inventory everything for insurance documentation. Then came the thankless task of cleaning the entire boat of smoke damage; with this complete, the boat was moved into heated winter storage and deconstruction of the ruined pilothouse began. A new 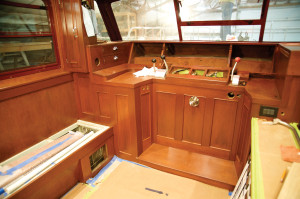 skeleton of ash and mahogany stringers emerged, framing the refitted cabin. Soon the smell of charred wood was replaced with the scent of fresh sawed hardwood, a new breath of life to this old wooden boat. Exposed wiring all tediously labeled can be seen, running fore and aft through the now exposed bulkheads. Craftsmen labor daily with hand and power tools, meticulously bringing attention to every detail.

Larsen explains the importance of ensuring a congruent look to the original construction throughout the upgrade. He says, “It’s important that the work flows seamlessly into the reality of an enhanced masterpiece.” In order to meet high standards, Larsen didn’t stop at mandating superb construction techniques. Before the alteration of the aft cabin could even begin he met with accredited marine surveyor Peter Kronich of Sheboygan, Wisconsin who has consulted with Larsen on several projects in the past. Although preserving aesthetics and functionality were a priority for the project, Larsen’s first concern was maintaining the boat’s stability. Kronich, who is a registered professional engin 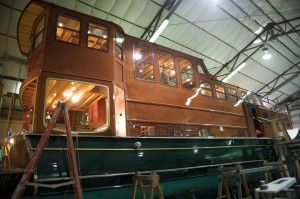 eer, has decades of design experience and worked as an engineering officer with the U.S. Navy, providing consult to submarine design and construction. Discussion of the project centered on maintaining design and construction that was in keeping with the boat’s history as well as determining repair techniques. Pros and cons were carefully considered in taking on a project of this magnitude. The main concern at this phase was to avoid potential construction pitfalls.

After reviewing the alteration plans, they both agreed that raising the aft deck was significant enough to warrant a stability assessment. To do this, Larsen called on the expertise of Naval Architect Mark Pudlo of Seacraft Design in Sturgeon Bay. Pudlo and Lauren Balza, a naval architect with the Seacraft design team, reviewed the alteration and determined that additional ballast would have to be added to the boat as far forward as possible. Balza then completed stability assessments and recommendations f 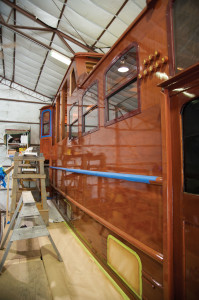 or the addition of Sea Spray’s aft cabin. The assessment determined that additional ballast would be needed to offset added weight from the new aft cabin and the elevation in the boat’s center of gravity.

Yacht Work’s crew was then able to commence with the alteration of the boat’s aft cabin. Yet another skeleton of stringers appeared and the beauty of exotic hardwood took on additional lines, thus extending this classic yacht into a higher profile while retaining the beautiful look of what once was an East Coast commuter yacht.

The stateliness of this classic vessel speaks for itself, yet the craftsmanship needed to preserve and enhance such a beautiful craft cannot be found just anywhere. When only the best in shipwright capabilities will do, Yacht Works is a refit yard second to none.