Door County’s new record Eastern Hemlock tree was measured on Rock Island State Park this past October. Its circumference is 114 inches, measured at 4½ feet above the ground, its height is 72 feet, and one-fourth of its average crown spread is 14. Adding these three figures together gives the tree a record point total of 200.

This new record surpasses the old living and healthy hemlock measured at the Toft Point State Natural Area. This tree has a circumference of 96 inches, height of 85.6 feet, and a one-fourth average crown-spread of 7.626. Its record number is roughly 189.2.

The tall, feathery and lacy-appearing Hemlocks have great cultural as well as ecological value. Study a grove of Hemlocks for several consecutive seasons and invariably you will observe White-tailed Deer and Ruffed Grouse who depend upon the dense canopies for protection. Hemlock twigs and needles are a prime winter food for the deer, perhaps dessert-like to them. Very distinct browse lines produced by the tallest deer standing upright on its hind legs to reach the twigs can be easily seen on the trees. 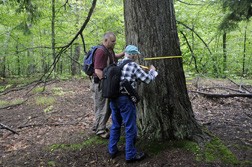 Birds including the Pine Siskin, Black-capped Chickadee and Crossbills are lured to the copious amount of seeds produced every few years by a large tree. Uncommon Snowshoe Hares and common Porcupines in our region both relish the bark, twigs and young saplings, so expect to see these creatures there too. More will appear later in this story related to the extensive damage being done by the deer and Porcupine to our dwindling number of Hemlocks.

Ordinarily it’s the towering and much larger Western Hemlocks that are highly valued for their lumber and great timbers. I was always led to believe that our Eastern Hemlocks were not nearly as highly valued for their lumber as for their tannin-rich bark. Prior to the settling of the West there must have been enormous stands of Hemlocks growing and thriving in the cool moist woods bordering the Wisconsin shores of Lake Michigan, and few builders would prefer Hemlock lumber to the highly favorable and abundant White Pine.

Gradually, as much prairie land was plowed and planted to wheat, there arose a large and growing need for horse harnesses. Leather tanneries, such as at Two Rivers (located on Tannery Road, then) flourished and, with them, a need for Hemlock bark rich in tannin. Huge old-growth stands of these trees were gutted, boatloads of thousands of bales of Hemlock bark were shipped to the leather tanneries located near good sources of water, and the majority of the enormous 36-inch or thicker trunks were left to rot in the woods.

It was when Charlotte and I moved into our new home in the woods in north-central Door County in 1982 that we had the good fortune of meeting Alfred and Caroline Flock, veteran farmers who lived nearby. One of the wonderful stories 92-year-old Alfred shared with us was of their large barn, long machine shed and house framed and beamed with Hemlock that had been cut in their own woods when Alfred was a child. Those people were highly intelligent, very expedient and also excellent carpenters. In spite of Hemlock lumber having several apparent faults, the Flock buildings today, many years after being built, are still square and true, in excellent condition and are a joy to look at and admire. 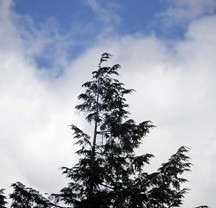 The top and branch ends are rather lacy and droop downward like small weather vanes.

This past spring Charlotte, our friend Paul and I drove to western North Carolina to visit close friends there and to enjoy spring in the Appalachians. What a disappointing jolt we received upon seeing our first of hundreds of both Eastern and Carolina Hemlocks standing dead and leaf-less, appearing in places like a huge “tree graveyard.” They had been killed by the dreaded and fast-spreading Hemlock Woolly Adelgid (a-DELL-jid). This terrible forest pest first appeared in the Pacific Northwest in the 1920s, having arrived from Japan and China in one way or another.

This aphid-like destroyer, spread by wind, birds, deer, people etc. was first reported in Virginia in 1951 and since then has spread from southeast Maine to Georgia. This creature secretes a waxy or woolly covering and can be very destructive to conifers, especially Hemlocks. It kills the host tree within several years, thereby allowing entrance of light to the forest floor. In so doing, this causes stream temperatures to rise, brings about rapid crowding of the understory of the woods by thick growths of ferns and produces unwelcome changes to the soil make-up. Highly visible damaging changes now occur in those ecosystems.

On our way back home from North Carolina we stopped to hike in the famous Joyce Kilmer Memorial Grove Trail. Here, too, we encountered many dead hemlocks. Much to our amazement, in order to ameliorate the potential hazard from the tall dead trees, the U.S. Forest Service, in charge of managing the memorial forest, dynamited many of those dead trees next to the trails. Our first impression was, gosh, were these giant trees twisted apart and broken off by a tornado, or what? The forestry people attempted to make the whole process appear more natural by dynamiting, splintering and literally blowing these trees apart rather than by producing clean square cuts using chainsaws. We were amazed and also stunned.

Wisconsinites are fortunate that the Hemlock Woolly Adelgid has not reached our state yet. However the native Hemlocks are not doing very well either due to the continuing damage by the porcupines and deer. Porcupines don’t hibernate here in winter and often will locate Hemlock trees and live in them, feasting and surviving on the twigs, bark and needles. Consequently the trees become terribly disfigured.

With warming winters and less snow accumulation on the ground, deer are able to easily find and devour hemlock seedlings and saplings. In past years I’ve challenged hikers with me in mixed hardwoods containing Hemlocks to locate some small Hemlock seedlings. Our attempts have nearly always failed. In other words, these trees are not regenerating here.

Add to this problem the dreadful White-bark Beech Disease that threatens to kill upwards of 95 percent or more of our native American Beeches within 10 years.

Are you prepared for the next huge additional setbacks? It is not if, but when the Emerald Ash Borer will reach Door County and there will go most of our White, Green and Black Ash trees! 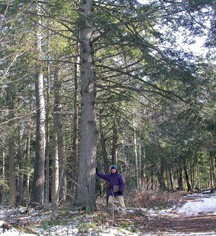 Nick Anderson admires another large Eastern Hemlock along the Schoenbrunn Trail to the Mink River.

Another shocking revelation surfaces when one searches in mixed hardwoods for young Sugar Maple seedlings and saplings. The deer also gobble these down nearly as fast as they find them. And so we can look at, for example, one of the largest remaining stands of old-growth Maple-Beech-Hemlock woods in our area, Rock Island State Park. In the years to come these three old-growth climax forest species will be fast disappearing. What will replace them?

With changing global climate, insect pest invasions, changing deer population coupled with poor management and other pertinent factors, we “old timers” can only look back in time when this incredibly beautiful old-growth forest was in its prime, a masterpiece not made by hands, a cathedral in the wild.