I’m sure that many of you, as did I, read the famous “Evangeline” by Henry Wadsworth Longfellow as a high school student. The opening lines: “This is the forest primeval. The murmuring pines and hemlocks, Bearded with moss, and in garments green, indistinct in the twilight…” are as memorable now as the day we began reading and studying this literary gem.

I was immediately drawn to the “forest primeval” because I had already developed a fondness for hiking and exploring in some of the beautiful rich and old growth woods bordering the Kewaunee River. I was very fond of pines, too, because my dad had planted several different species on our property, including the Red, Austrian, Ponderosa and the small and unusual Mugo Pine. But Hemlocks – I couldn’t recall hearing about or seeing a Hemlock tree up to that time, nor could I identify one if I had to. 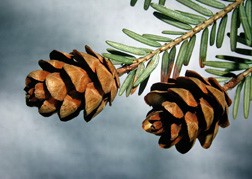 The seeds of Hemlock cones, among the smallest of conifer cones, are relished in winter by several bird species.

Hemlock trees are rarely planted as landscaping specimens simply because their preferred habitats do not include open sun-drenched lawns. These trees are always latecomers into a wood simply because they demand the cool moist conditions that are not present in young woods. Being extremely shade tolerant they grow slowly but well beneath the canopies of other “parent” trees.

Ever so gradually the Hemlocks overtake and do away with all but the most shade-tolerant species such as the Sugar Maple and Beech. The constantly cool humid conditions required by a Hemlock’s roots are insured due to the dense roof-like canopy. This is one conifer, which cannot withstand neither great summer heat nor sparse rainfall. Their natural reproduction requires an accumulation of many years of leaf mold where they will thrive in shade produced by its broad-leaved partners as well as by its own thick shade-producing crowns.

An old-growth Maple-Beech-Hemlock forest, often containing good numbers of Yellow Birch and White Pines, lacks much of an understory of small plants. Given a roughly 95 percent or even greater shade factor, along with rather acidy soils resulting from the Hemlocks’ fallen needles, not many plants can tolerate these conditions. It’s as though the Hemlocks are insuring that their competition be reduced to the absolute bare minimum. Some of the small plants that I have seen in the few fairly dense but small stands of Hemlocks in Door County are Rattlesnake Plantain Orchids, Plantain, Wood Sorrel, Wild Sarsaparilla, Canada Mayflower, Wintergreen, and Starflower.

Few conifers in Wisconsin have such graceful and, at the same time, rugged beauty as the Eastern Hemlock. It is a close relative to firs and spruces and is frequently called the Hemlock Spruce by older silviculturists. The Hemlock belongs to the Tsuga (SOO-ga) genus, the Japanese term for an Asiatic species. Its name means yew-leaved.

Its species name, canadensis, gives one the impression that it is a tree of the far north. Actually it grows as far south as the mountainous regions of northern Alabama and Georgia. Only small pockets of them grow as far west as Minnesota. They are common in the northeastern half of Wisconsin and extend eastward from Ontario to the Atlantic coast and Nova Scotia. It is the state tree of Pennsylvania where some of the largest specimens have been discovered. There are no species of Hemlock native to Europe, whereas they are common in North America and Asia. 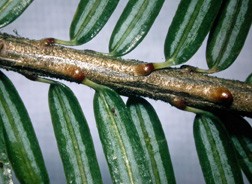 The attaching stems and the breathing pores show well on this close-up of Hemlock needles.

It was when I began working at the Ridges Sanctuary as naturalist and tour guide in 1964 that my interest in the conifer trees began to grow, for here were White and Red Pines, Black and White Spruces, Balsam Firs and Eastern Hemlocks growing well within a two-hour tour. What made these outings for visitors so worthwhile was that the hikes included much hands-on learning. Needles and twigs could be handled and compared, bark was simple to see and touch, and especially crowns, often rising above all other vegetation, each had a different story to tell.

An excellent field mark of the majestic Hemlock is its weather vane-like tip, which droops sleepily away from the wind. Examine a leafy, needled twig of this tree and you will soon discover its surprisingly soft flexibility. This brings to mind the most invigorating use of Hemlock twigs I’ve ever experienced. It was in a sauna bath with my Finnish teaching friend, Mel Natti, whose parents farmed near Ashland in northern Wisconsin. Mel cut 15-foot-long Hemlock twigs and bound them into what appeared to be a miniature floppy green broom. After we were super-heated in the sauna bath to the very marrow of our bones we took turns switching each other on the back and buttocks. Talk about circulation of blood! Invigorating!

In case you come upon a flat-needled tree and are confused between Balsam Fir and Hemlock, remove one needle from the tree. If it was attached to the twig with a tiny stem it is a hemlock. The needles are rather pointed or narrow where they are attached to the twig. They are deep glossy green on their upper surfaces, are about one-half inch long, and appear to have two light greenish-blue stripes on their undersides. A somewhat waxy surface surrounds many microscopically small openings, called stomata, which are “breathing” pores allowing for the tree’s exchange of gasses.

By the way, this feature is not necessarily a point for Hemlock needle identification. Other conifer needles also have whitish stripes on their undersides, some more than others. Another interesting feature of Hemlock needles is that their margins are very finely toothed. In order to see the teeth you will need at least a 10X hand lens. By the way, Balsam Fir needles are rounded at the bottom at their attachment points to the twigs, and they have no stems. 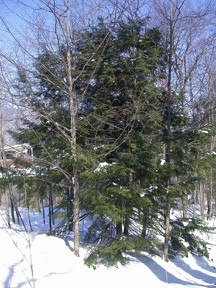 The lower boughs touch the ground on these fully formed lacy-appearing Hemlock trees.

The largest Eastern Hemlock in the U.S., as of 2011, is in Macon, Georgia. Its circumference at 4 ½ feet above the ground is 192 inches (16 feet!), its height is 159 feet, and its average crown spread 45 feet. The largest Hemlock in Door County, measured on Plum Island in 1981 by Dick Purinton and me, was huge having a circumference of 127 inches, height of 86 feet and an average crown spread of 49 feet. We tried unsuccessfully in 2011 to relocate and measure the tree but several sad and unnecessary factors had led to its deterioration, with most of the tree broken and on the ground.

Several of us, including Charlotte, our friends Beth, Don and I had an exhilarating find on Rock Island in September of this year while searching for mushrooms. There grew an enormous Hemlock tree along Algonquin Trail within sight of where it intersected with Blueberry Trail near the southeast end of the Island.

This new Door County record tree’s measurements and more about the Eastern Hemlock and its uncertain future will be included in my next Peninsula Pulse Door To Nature story.