Recently Charlotte and I were thoroughly entertained by a Red-winged Blackbird hot on the tail of a low-flying Great Blue Heron at the Mink River. That feisty little Blackbird would literally sail into the top of the large water bird and tell it to get lost, to never return. A few minutes later it attacked a Turkey Vulture that flew too close to its territory. Now we could visually realize that the Eastern Kingbird wasn’t the only small bird fully capable of chasing larger birds out of its proclaimed nesting area. 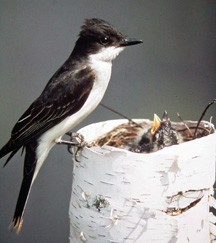 Several years ago a gentleman called and, although he didn’t sound frantic, he was very concerned about a bird. His description of the Eastern Kingbird was perfect, and it was a pair of these authoritarian birds, nesting in a hanging planter near their outdoor swimming pool, that was preventing him and his family from using this important summer facility. That’s serious business when it’s hot and humid and the temperature is in the 90s.

This bird of the countryside almost appears to carry a chip on its wing. It is absolute ruler of the weedy meadows and brushy fence lines that are often included in this little kingdom, and it goes about its insect-catching duties, dressed in formal black and white, very businesslike.

A trademark it appears to wear proudly is the white band boldly adorning the tip of its black tail, the Eastern Kingbird, tyrant of tyrants.

Native Americans called this pugnacious flycatcher, “Little Chief.” Early English settlers, fed up with the life they led under the demanding rule of a king, tabbed him the “King Bird.” Should you by chance get too close to its nest he will quite savagely show you why the scientists named him “Tyrannus tyrannus.”

How we wait for the arrival of the Eastern Kingbirds in early May. Their stay is quite short and by mid-September they’re on their way to southern Mexico and beyond to South America, countries including Columbia, Peru and Bolivia, for the duration of the winter.

One can hardly mistake an Eastern Kingbird in Wisconsin. The dark slate-colored, black head and back and white undersides of this chunky nine-inch spitfire are usually sufficient field marks for quick identification. Add to those the white band bordering the tip of the tail, a distinctive feature of only this flycatcher, and you can’t miss.

Some books picture the Kingbird’s bright orange crown patch. This is not visible under ordinary viewing conditions. I have seen it twice, once on a dead car-killed Kingbird found on the highway, and the other on a live Kingbird, spitting mad, that I had captured in one of my mist nets while banding birds years ago. That bird was downright antagonistic and shrieked at me constantly. It fought vigorously to escape from my hands as though to say, “They don’t call me Kingbird for nothing!” 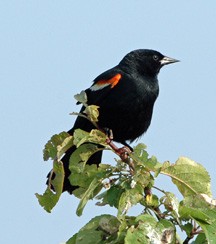 A Red-winged Blackbird is always on the lookout for intruders into its nesting territory.

It is very interesting to watch Kingbirds hunting for food. Their posture is quite erect as they patiently wait for a flying insect to appear. Upon seeing one, the birds will sally from their perches and frequently snap their bill so vigorously in capturing the prey that you can easily hear the sudden closing from 30 feet away on a quiet day. Food obtained, the aggressive birds return to the fence wire, Mullein stalk, or other lookout to wait for their next victim.

The courageous bird will not hesitate in attacking a much larger bird that happens to quite unsuspectingly fly too close to the Kingbird’s feeding or nesting territory. Many other birds, including hawks and crows will be forcefully evicted, often with pecking blows, by this militant little aerial “resident winged caretaker” of many farms and old orchards. There are cases on record of them even attacking low flying airplanes.

Don’t expect a melodic song from the Eastern Kingbird. His fast quivering wingbeats and feistiness are matched by a rather shrill, jerky, stuttering “Dzeet Dzeet Dzeet” call.

Its bulky nest is frequently built near the tip of an old apple tree. A pair chose an old scrawny half dead Paper Birch tree south of the Baileys Harbor Town Hall quite a few years ago as their nesting site. I stopped there with my birdwatching group early one morning for a closer look at the tyrant flycatchers.

I had walked ahead of the group toward the tree and, just as a simple experiment, kissed the back of my hand loudly to imitate the cries of the young in the nest. Like a flash, one of the adult kingbirds was after me, swooping and diving with no let-up to within inches of the top of my head and “cussing” me out at the top of its squeaky voice. I was forcefully and unceremoniously ousted from its yard and told to never return! 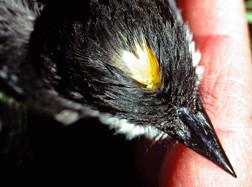 The seldom-seen orange crown of the adult Eastern Kingbird is normally hidden by black feathers.

My favorite experience with an Eastern Kingbird occurred during one of the summers in the early 1950s while I was earning money so I could continue with my college education in fall. I was working 14-hour days for the Larsen Canning Company at one of their pea viner stations west of my hometown of Kewaunee, Wis.

The viners were situated on a high hill overlooking the broad Kewaunee River valley, a magnificent pastoral scene. The entrance of the outhouse faced the valley, away from the working area, and if there was a door, we never closed it. The view was too beautiful.

Nearby, within clear view of the “throne,” stood an old rusty hay loader that came to be a favorite perch for a family of Kingbirds that lorded over the fields around the viner station.

What a sudden and wonderful change of atmosphere took place whenever we used the wooden privy, from the overwhelming smell of fermenting pea vines and earsplitting clamor of the viners to the peaceful country scene and the delightful chattery music and aerial performances of the Kingbirds. It was then and there that this provocative little flycatcher became one of my favorite birds of the summer countryside.

As for the family which I mentioned earlier in this story that had been evicted from their swimming pool, I assured them that the baby Kingbirds would soon be fledged and gone from the nest in about a week, that they are excellent flycatchers of insects and would help to keep their yard more comfortable for swimming and sunbathing.