So, when you discover a new style of beer, as I recently did with Gose, a salty, coriander-spiced sour beer, ya gotta try all you can get your hands on.

The first two I found – Schell’s Goosetown and Anderson Valley’s The Kimmie, The Yink & The Holy Gose (yes, that’s a mouthful!) – were very tasty. The third, dressed in an enticing green can that says Wild Sour, was not so tasty. Depending on the receptacle you dispense the contents of the can into, it pours either completely dead, or with a mild head that quickly dissipates and leaves behind what looks like my very first homebrew, a flat and sour draft of nastiness. 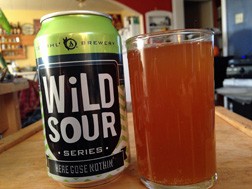 This “Here Gose Nothin,’” a release in the Wild Sour series of the DeStihl Brewery of Bloomington, Ill., was very disappointing. One of the cans that poured flat tasted like pickle juice, and had about as much carbonation as you will find in pickle juice. I didn’t get any of the intriguing saltiness I had from the other two kinds of Gose, and if coriander was in there, somebody forget to tell it.

When I poured the first can of Gose into a glass and it immediately died, my first thought was that the glass was contaminated in the cleaning process. I couldn’t imagine how, but, just to be certain, before opening the second can I washed a glass in hot water and let it air dry before pouring.

But, no, it too poured practically dead. I poured the beer into several glasses, and each time it poured out with a thin head that quickly dissipated and left a dead-looking beer behind.

The final can from the four-pack I poured into a tall, slender glass. Gose is supposed to be drunk from a tall, cylindrical glass. This pour produced the biggest head, but it quickly flattened and just left a tiny ring of white foam around the edge.

I really wanted to love this beer, but that’s just the way it Gose sometimes.