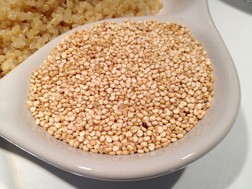 Although the term “superfood” is a just marketing ploy with no backing in science, there are few things that fit that title more closely than quinoa.

This ancient seed is not to be confused with typical grains or cereals. Described as a pseudo-grain, it is actually a seed in the same family as buckwheat and chia. This makes it a good alternative for gluten-free fanatics who still enjoy the occasional pasta dish.

The nutritional punch is where quinoa reigns supreme. Despite being high in overall protein, quinoa is also a complete protein. Proteins are made up of 14 amino acids, nine of which cannot be made in the body and must be consumed in the diet. Complete protein foods contain all nine essential amino acids, ensuring there is no protein deficiency. Most meats are complete proteins, but for those who do not eat meat, quinoa is an equally protein-filled food.

The versatility of quinoa adds to its assets. Frequently served in cold summer salads, it can also be an addition to chili, substituted for pasta, added to salsa or function as oatmeal with berries, milk and honey.