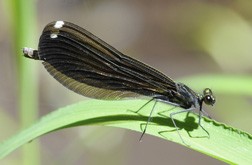 Ever since I was a child growing up in Kewaunee I’ve enjoyed quiet natural ponds and the fascinating life they support. One of our favorite spots was the large wetland behind Buchanan’s Funeral Parlor at the west edge of town where we’d catch plenty of tadpoles about the time school let out. I can recall describing to my Grandma Skala some unusual winged creatures flying along the edge of the water, and she told us that they were “devils darning needles” and if we were bad boys they’d sew up our ears so we couldn’t hear. Naturally, I eventually learned they were dragonflies.

I had my first fairly successful try of the season at photographing dragonflies and damselflies during the last week of June. The only species I could get close to were the Dot-tailed Whiteface, Twelve-spotted Skimmer, and the Crimson-ringed Whiteface. There were many Bluet Damselflies whose identity is always very challenging. They are usually around aquatic plants quite close to the ground and their flight is very slow, gentle, weak and fluttering in an airy manner, nearly as though they are floating in space.

As I was trying for better Bluet pictures a thought came to mind about a spot I had not been to for over 25 years, along a nearby creek, where Ebony Jewelwing Damselflies were quite common. They are one of the so-called broad-winged damselflies. The favored habitat of these beautiful insects is near shady, shallow, slow-moving streams and rivers. Mucky stream banks and plenty of mosquitoes go hand-in-hand with these sites, so knee boots and repellent were the order of the day. True to my memory, the Jewelwings were very active.

There are about 180 species of the broad-winged damsels worldwide with nine species in North America. Only three species are fairly likely to be found in Door County, the River Jewelwing, American Rubyspot and the Ebony Jewelwing, attaining a total length of a little less than two inches. Males and females are easily told apart by wing shape and color pattern. The male has a brilliant blue-green iridescent coloring on his slender abdomen, the tops of his wings, and head area. This coloring coupled with his jet black wings as sunlight falls upon them present a sight you’ll not soon forget. 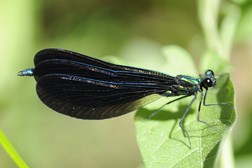 An iridescent abdomen, thorax and top edges of black wings are features of the male Ebony Jewelwing.

The female shows a little blue-green coloring on some parts of her body, but her abdomen is brownish which easily separates her from the male. Her wings, appearing somewhat more transparent than the male’s, are also black with each of the four wings having a small white spot near the tip. The white wing tips are like tiny spotlights, which allow for easy identification even from 20 to 30 feet or more. Some of the pictures I took against the sun, with backlighting on the Ebony Jewelwings, showed a surprisingly amount of tiny hairs on the head and front of the body, apparently to provide these creatures with some insulation against the cold.

Several features easily separate damselflies from dragonflies. When at rest the wings of most damselflies are held parallel to and pulled inward closely to the abdomen. Dragonfly wings are separated and held rigidly outward from the body when at rest. The large eyes of dragonflies join one another at the top of the head. A damselfly’s hemispherical eyes are widely separated. Both of these creatures have compound eyes with thousands of individual “eyes” or facets called ommatidia (om-ma-TID-e-a), appearing like miniature honeycombs. Based upon laboratory examination, it was found that a large dragonfly has as many as 28,000 ommatidia, while an eye of a House Fly has about 4,000. All insects in general have compound eyes.

The pictures of the Ebony Jewelwings that I took clearly show delicate and surprisingly long spines on each of their six legs. While in flight the spiny legs form what appears as a “basket” in which these little “flying marvels” with insatiable appetites catch their prey, such as mosquitoes.

What’s quite amazing to consider is that the larvae of damselflies, and also dragonflies, are committed to an amphibious life. Their carnivorous underwater life, as naiads (NY-ads), may last from a year to as many as three before they are ready to leave the water, when it is time for the damselflies to emerge into their adult stage. Now the adults will remain air-breathing winged aerialists whose purpose in their lifetime is to mate and to eat other smaller insects, thereby helping to control their population.

Don’t think for a minute that dragonflies and especially the large broad-winged damselflies, such as the Ebony Jewelwings, don’t have predators. They do, including Red-winged Blackbirds, Kingfishers, Tree Swallows and Purple Martins. An experience I had many years ago while working at The Ridges proved to me what efficient dragonfly hunters the Purple Martins were. I was writing a story about the Martins and needed some photos of them. My friend, Virginia Booth, then Ridges treasurer, lived along the nearby Baileys Harbor Bay and had two very active Martin colonies. What amazed me as I photographed and watched the Martins was seeing them return from hunting with their beaks literally crammed full of dragonflies. 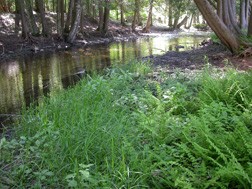 The next day I led my tour group of people to the observation platform, built in the wet swale north of Winter Wren Ridge. As we sat there I told them to watch the many Purple Martins as they hunted within sight over the open water separating the ridges. We could see them catching something but could not identify their victims. (Based upon my previous day’s experience with the Martins and dragonflies, my guess was the prey was largely dragonflies.) I asked my tour people if they realized that the Martins hunting over the water may be resulting in more mosquitoes at The Ridges.

It took about five seconds for someone to answer, “I thought that Martins are reputed to catch 2,000 or more mosquitoes a day.” It has been shown that Martins do most of their hunting higher in the sky where mosquitoes usually don’t fly. I think I had a few believers that day although I seriously question whether the Martins put even the slightest dent in the mosquito population at The Ridges!

Become more familiar with the dragonflies and damselflies. Go in search of the quiet slow moving creeks and streams where your chances are good for experiencing the amazing, never-to-be-forgotten Ebony Jewelwing Damselflies. Do all you can to help preserve their ecosystems. Surely these insects rank with the most beautiful flying creatures in our state.