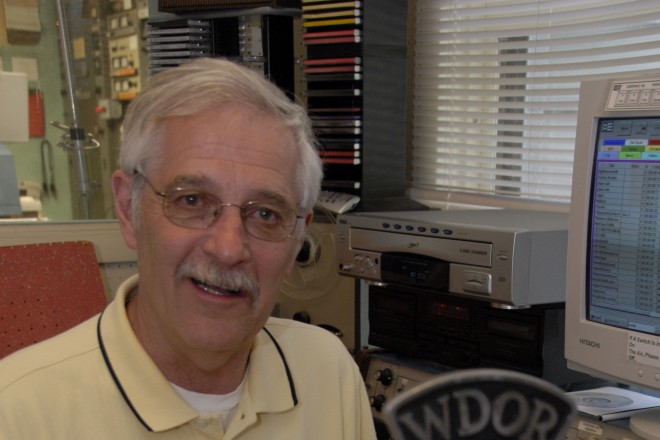 Door County boasts many natives, but it takes a special breed to be recognized as a Door County “personality” – that person who sets the tone for the peninsula, an icon that embodies everything great about life in our small communities. These are the people who know everyone and everything, not because they like to memorize facts or gossip about people, but because they’re sincerely interested in people.

Perhaps the best quality of a Door County personality is that even if you’ve never met that person before, it feels like you’ve known them forever. That’s exactly what it feels like to talk to Eddy Allen, WDOR owner, operator, and radio celebrity.

For some Door County residents, forever might not be a complete exaggeration. This fall, Allen will celebrate a record 50 years on the air. Many people (even the ones who have never met him) call Allen “The Official Voice of Door County.” From a personal standpoint, I’ve been listening to Eddy Allen on WDOR’s Noon Report ever since I was old enough to comprehend what a radio was. Still, the day that I’m interviewing him will mark only the second time I’ve talked to the man, and yet a lifetime of knowing who he is.

It is impossible to talk about Allen and his ties to the radio business without mentioning his family ties. When asked how he got started in radio, Allen laughs and says, “There was no business to start ‘in’ – this goofy business is all I’ve ever known!” Allen’s father, Eddy Allen Jr., was a radio man in Chicago, and his family lived on the north side, across the street from Lincoln Park. When he was eleven, Allen’s family moved from Chicago to Sturgeon Bay, and his father started the WDOR radio station with a group of local businessmen. Their first day on the air was September 8, 1951.

In seventh grade, Allen’s family moved to another Sturgeon Bay home on Iowa Street, which was very close to the WDOR studio. “I hung around the studio all the time,” Allen says. “It beat staying at home and cleaning my room, so I was over here every chance I got.” His own radio career began in 1957, when he was seventeen. “My father figured that if I was going to continue to hang around, he might as well put me to work. I started by doing the morning news on Saturdays.”

Allen did not plan on staying at the radio station after high school graduation. He wanted to be an engineer, and in the fall of 1958 he went to the University of Wisconsin-Madison to pursue an engineering degree. But the fit wasn’t quite right, and so he came back to Sturgeon Bay after a year, working at the station until he figured out what he really wanted to do with his life. History and political science proved to be more interesting, and he graduated with a double degree in 1964. Not much time passed before the “draft board got him” and he was sent to Korea in April 1965. 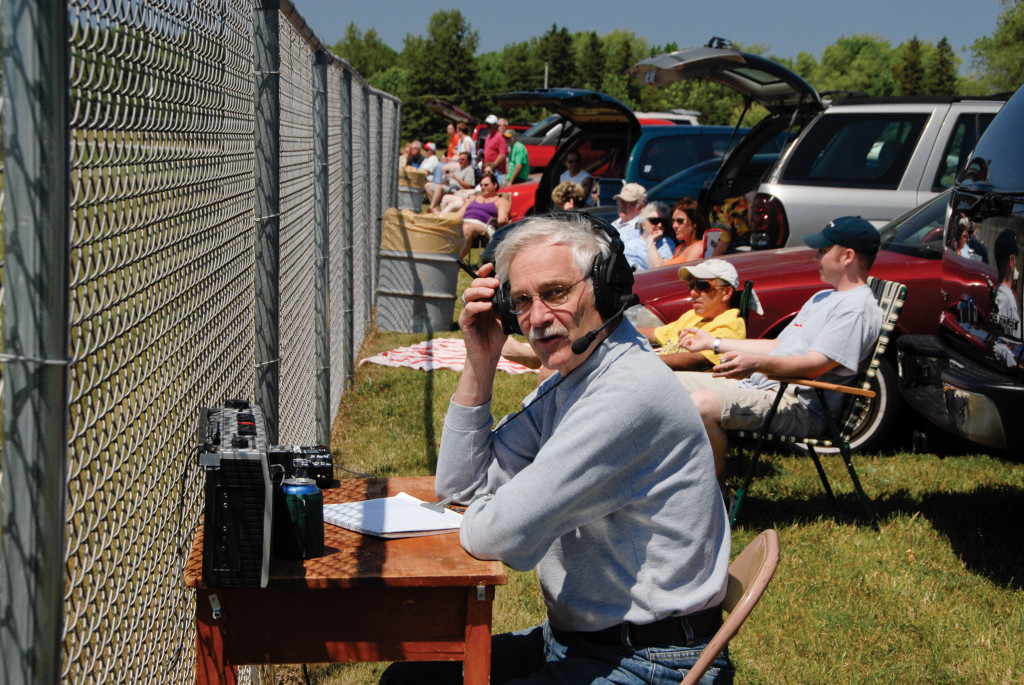 WDOR’s Eddy Allen calls a Door County League Baseball game, one of the best parts of his job. Photo by Dan Eggert.

After spending three years in Korea, Allen came back to Door County in 1968 and went back to working at WDOR. Little did he know that one of his life’s biggest passions would now become his job. “I always loved baseball – I think it stems from living next to Lincoln Park when I was a kid. Jocko Rader called my father up and said, ‘WDOR should broadcast the Door County League baseball games every Sunday. Can you think of anyone there that might want to do that?’ Of course, my dad told him that I would do it – before he told me. But I’m glad those broadcasts were given to me – it had turned out to be one of the best parts of working here.”

In the nearly 40 years that Eddy Allen has been broadcasting the league games, he estimates that he’s missed about fifteen Sundays. “There have been the occasional missed games, much to my chagrin. I’ve had a few graduations, birthdays, my own wedding.” I asked him how his wife felt about Allen being away every Sunday afternoon during the summer, and he says, “The Door County League is part of what Mary Lou [his wife] married into when she married me – I made sure she knew that from the very beginning!” Allen laughs. “I do try to make sure I get the yard work done at the beginning of the weekend, though.”

When asked why he continues to work in the radio business for so many years, he shrugs and says, “It’s better than actually working! In all seriousness, though, it’s all of the people I have met over the years. All the different groups and causes – that’s what keeps my job interesting.” His favorite part of WDOR is getting to do the daily talk show, where he interviews everyone from the Department of Natural Resources to the United Way to the various historical societies and museums around the county. “I’m a history buff, so I love having the historical groups on the show. I actually save some of those shows,” Allen says, motioning to the vast amount of tapes piled up in his office.

I’m at the end of my interview with Allen when the telephone rings. He reaches to answer it, as the WDOR office is a small enterprise, and he is in charge of receptionist duties for the evening. The phone call is from a woman who had called a few hours earlier to notify the radio station that her dog was missing. She is now calling to tell Allen that the dog has been found. Allen talks with her for a moment, and in a matter of minutes he has engaged in a conversation with such ease and sincere interest that one would think he was on the phone with a relative or a good friend. They talk for a few more minutes, and then Allen hangs up the phone and smiles.

“It’s funny, after all the years I’ve been here, you’d think I’d understand it – the way people thank us so profusely for just doing our jobs,” Allen says. “We get calls everyday from an organization or person thanking us for putting their information on the air. And I always think, ‘Why wouldn’t we do that for you? We’re a community entity – that’s what we’re here for.’”

One would think after nearly 50 years in the radio business, Allen would have plenty of interesting stories. “There are simply too many to count,” says Allen. But his job in radio has taught him a few lessons. “As silly as this sounds, one of the biggest things radio has taught me is to ‘look for the obvious.’ Things are so technical here that it’s easy to think the problem is bigger than it really is. I’m the ‘first responder’ to anything whenever there’s trouble, so experience has taught me that before I scare myself for no reason, I always make sure that ‘it,’ whatever ‘it’ is, is plugged in,” he laughs. “I’m serious! That’s the biggest lesson I’ve learned.”

My interview with Allen wraps up, and we chat about my family for a bit. Inevitably, he remembers my father as a star basketball player at Sevastopol High School and knows my relatives who own a supper club in Sturgeon Bay. The conversation is easy and comfortable, and it is only then that I truly realize how essential people like Allen are to Door County. More than linking family names together, speaking with Eddy Allen has shown me how important it is that we in Door County never lose that sense of community – or personality.