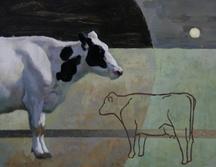 The artwork of oil painter Judi Ekholm will be shown on the main floor of Edgewood Orchard’s 90-year-old stone fruit barn for Exhibit III. When asked about the collection of oil on linen paintings she completed for the show, Ekholm shared that her paintings are inspired by the places the she has visited and loved. 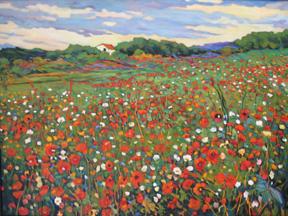 “They are memories of my feelings regarding the landscapes that have made my spirit soar,” she said.

A collection of newly completed oil paintings by Craig Blietz will also be shown on the main floor of Edgewood Orchard’s restored fruit barn. Blietz found inspiration for the body of work he created in part by gazing to the countryside near his home and studio in northern Door County.

“The animals, objects, and landscapes have become vessels of expression in my work due in large part to their ubiquitous presence in my geography,” said Blietz. Beginning with images that could be seen throughout the peninsula, Blietz explained why his show is collectively titled “Dream Shift.” 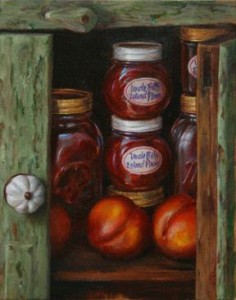 The final painter featured in Edgewood Orchard’s third exhibit is William A. Suys Jr. Suys’ current collection of oil paintings is a beautiful and diverse body of work that will be shown in “The Little Gallery” during Exhibit III.

When asked about his current show, Suys explained, “Many of the paintings created for this show reflect the beauty presented to me as an artist living in Wisconsin…I find that many of my paintings reflect a sense of humor and simple abundance.”

William Jauquet is one of two featured sculptors for Exhibit III. With a strong national reputation and long history with Edgewood Orchard Galleries as a talented wood carver and bronze sculptor, Jauquet has again re-invented himself with a wonderful collection of steel sculptures that are located in the gallery courtyard and throughout the gallery’s newly opened sculpture garden.

A talented wood carver, Chris Jauquet is back for his second season at Edgewood Orchard Galleries. Like his father William, Jauquet is a passionate artist with a passion to create. 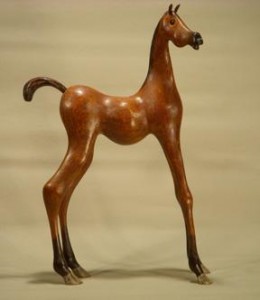 “Carving has somewhat of a therapeutic affect on me,” Jauquet said. “Time slips by so quickly once I really get involved in it…I tend to gravitate towards animals that have nice graceful lines such as swans and horses, but when I do other animals, my tendency is to add gracefulness to them regardless.”

The featured jeweler for the gallery’s third exhibit is Marcia McDonough. Inspired by the birth of her two sons, McDonough’s love of antique jewelry and modern design culminated in her creation of Mack & Bancker, her own jewelry collection.

“I followed my passion and made some prototypes of a few little inventive ideas I’d been thinking about during those crazy sleepless hours,” stated McDonough.