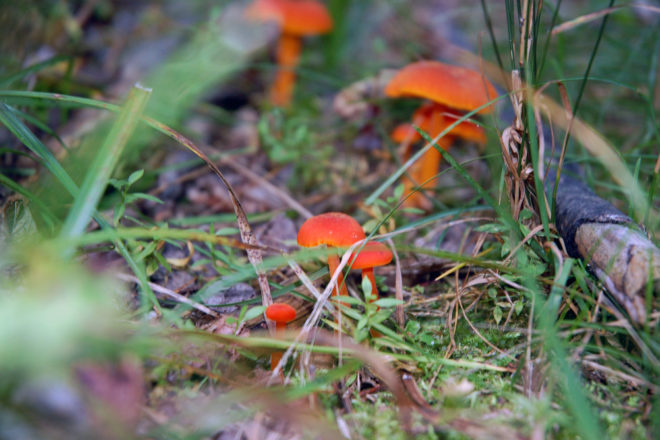 Due to circumstances beyond my control, I missed Charlotte Lukes’ mushroom hike at Whitefish Dunes State Park last Saturday.

But two days later I hiked the beautiful trails of the Door County Land Trust’s Sturgeon Bay Ship Canal Nature Preserve and was amazed by the variety of mushrooms growing along the trails. Sometimes a flash of red or orange or yellow or white fungi caught my eye among the forest detritus. I had to focus more intensely among the muted forest colors for the many brown or gray varieties, but they were all there in abundance.

Unfortunately, without Charlotte’s encyclopedic knowledge of mushrooms, I was left to guess at what I was looking at. The only mushrooms I knew for certain – because they are unmistakable – was a trio of giant puffballs popping out the side of a hill along one of the trails.

No problem, I thought. Since this was a visual exploration – visitors to Door County Land Trust properties are expected to visit without disturbing any natural material – I satisfied myself with the thought that I am not foraging, so I could look up and identify the mushrooms when I got home.

While I was able to identify a few of the mushrooms – such as a Common Funnel mushroom and P. porrigens, known as angel wing, a white-rot wood-decay fungus that thrives on conifer wood, particularly hemlock, which is abundant in this location – most of them stumped me when it came to making IDs because I did not take the time to take multiple shots of each one, including stems and underside gills, which would have helped with identification.

The lessons learned? I should probably not go foraging for mushrooms without an expert, and I should make certain to take Charlotte’s next mushroom hike.