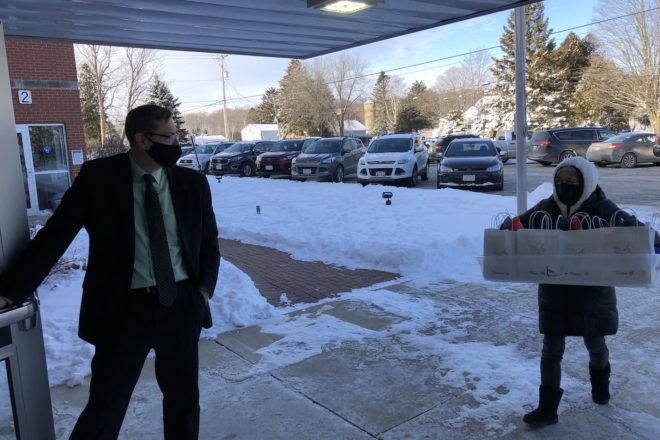 When Jeff Lange learned that teachers were not near the front of the line of Americans who are eligible for vaccinations against COVID-19, he recalled thinking, “Somebody has to do something for these people.”

That ‘something’ turned into goodie bags with gift certificates for every staff member, teacher, employee, lunch server and bus driver in the Sevastopol School District.

Lange, a retiree and longtime food-pantry volunteer, said he had been impressed by the efforts, flexibility and determination of the teachers, administrators and staff this year as they educated, fed and protected students during the public-health emergency.

With help from Superintendent Kyle Luedtke; EconoFoods manager Jon Calhoun; and key helpers Doug Henderson and Cindy Block; Lange presented gift packages to 110 people associated with the district on Feb. 10. Each package included a gift from Door County Coffee, secured by Calhoun; and $30 gift certificates for use at the grocery store.

Lange; his wife, Brenda; and a couple of helpers asked a total of 70 people to donate $100 apiece to raise the funds for the gift packages. They received that amount from 33 people.

The Gibraltar School Board is wasting no time in its study of the conditions, communications and professional relationships that exist among instructors and school officials.

In the wake of an early-retirement departure and a physics/chemistry instructor’s resignation at the end of the first semester, the Gibraltar board fielded questions and heard concerns from district residents. Late last month, the board began what its president, Stephen Seyfer, called a “deep dig” into why a teacher would want to leave in the middle of a school year.

On Monday, Gibraltar Schools Superintendent Tina Van Meer said she and Seyfer would have a “listening session” Feb. 9 with secondary-school teachers. In addition, between this week and the Feb. 22 school board meeting, Seyfer said the board has scheduled 13 interviews with eight current teachers, four teachers who resigned during recent months or years, and one retired teacher.

In addition, the board is considering paying $1,250 to School Perceptions to survey graduating seniors. After viewing some of the questions the survey firm proposed, board members said they would like to have the survey customized for the Gibraltar district specifically and the COVID-19 pandemic experience in general. The board also asked School Perceptions representative Sue Peterson to provide a cost quote to conduct a postgraduate survey as well. The board will consider that independent survey in the future.

Gibraltar Superintendent Tina Van Meer said the district is working to implement a plan by Feb. 15 to allow all kindergarten through fifth-grade students to return to in-classroom learning. Van Meer said reentry into the classroom is by parent choice. Board President Stephen Seyfer said schools will likely provide remote-learning options next year and beyond for families that want that choice.

The district is also working toward better classroom opportunities for students who have individual learning plans, Van Meer said.

“Having all children in school will be an evolving plan,” Seyfer said.