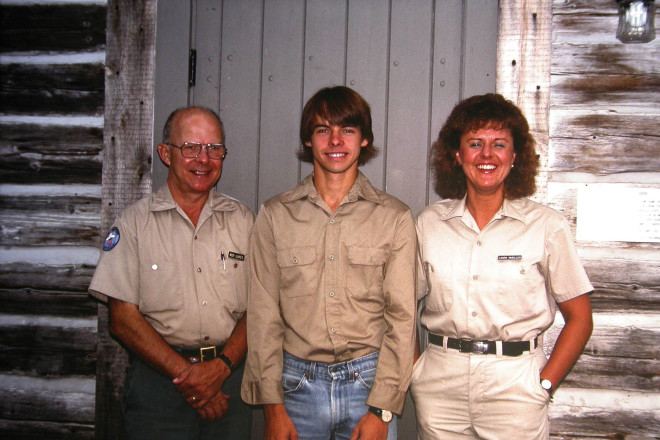 (left to right) Roy Lukes, John Wilterding, and Laura Mueller in the summer of 1987. Photo courtesy of Roy and Charlotte Lukes.

Besides providing sanctuary for many rare species for the past 74 years, The Ridges Sanctuary in Baileys Harbor has provided countless educational and research opportunities to visitors and residents. “Everyone sees the land protection efforts,” says Executive Director Steve Leonard, “but the hidden treasure has been how The Ridges has impacted so many people over the years through its education programs.”

“Starting back in 1937, [The Ridges] has been the center of environmental stewardship, a place for learning, for all ages,” Leonard says. Indeed, the array of programs and events currently offered by The Ridges, the state’s oldest private nature preserve, is impressive. Some of those educational opportunities include:  the Festival of Nature hikes over Memorial Day Weekend; Discovery Bird Hikes from May through July; the Ride for Nature Father’s Day weekend; the Wisconsin Naturalist Program for adults interested in serving as volunteers; Nature-focused day-camps for children throughout the summer; Thursday evening “Lake Lessons” in summer; and The Ridges’ Natural Christmas each December.

In addition to these programs, there is also a slew of ongoing activities throughout the year. Naturalist-guided (or self-guided) hiking and snowshoeing on The Ridges’ five miles of trails are popular (over 5,000 people visit the trails and the nature center annually). The sanctuary also coordinates activities like the annual crane count, GPS mapping, flora inventories, frog monitoring, and countywide stream monitoring programs. Further, they facilitate invasive species identification and the development of control plans for private landowners. And, last but not least, in a partnership program with the McArdle Library in Baileys Harbor and the Door County YMCA, they also offer monthly No Family Left Inside programs, which connect children and adults to the outdoors. 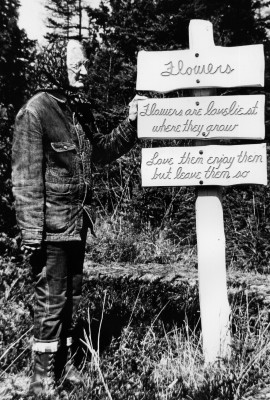 The ultimate goal of all these activities, of course, is to fulfill The Ridges’ mission, which is “to protect the Sanctuary and inspire stewardship of natural areas through programs of education, outreach, and research.” And, while perhaps more formalized than in years past, these types of activities and this mission are nothing new – the area encompassing what is now known as The Ridges Sanctuary inspired research, education, and stewardship long before it was officially a designated sanctuary.

Arguably the most important figure in coalescing conservation passions about the area now known as The Ridges was Albert Fuller, the head botanist at the Milwaukee Public Museum. In 1935, he inventoried the area’s flora, discovering 25 of the 40 orchids native to Wisconsin and many other unique species. Over the course of a couple of years, Fuller did as many presentations as possible to educate the community on the need to protect the ridges and swales – a series of elongated, alternating land and wetland formations resulting from the waters of Lake Michigan receding over many centuries. His passion sparked the enthusiasm of people who would not only work to protect this area, but also take the forefront of the county’s conservation movement, like Jens Jensen (founder of The Clearing), Olivia Traven, Emma Toft, and many others.

The timing of Fuller’s visits and presentations was fortuitous. In 1936, the County of Door, which owned the 40-acre parcel containing the two 1869 Range Light structures (see sidebar), began clearing the land in order to develop it with roads and a campground/trailer park. While legends abound as to how those development activities and plans were halted, in actuality it was Baileys Harbor residents and founding members of The Ridges Olivia Traven and Anna McArdle that stopped the process via visits and phone calls to attorneys and local park system staff. A group of 10 men and women then banded together in 1937 to form The Ridges Sanctuary, Inc. They began leasing the parcel from the county and slowly began acquiring adjacent lands for protection as well. 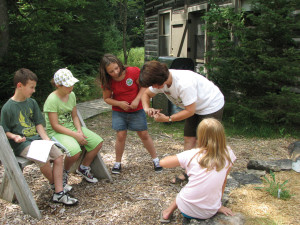 Youth program at the Ridges. Photo courtesy of the Ridges Sanctuary.

Today, The Ridges boasts over 1,500 members and over 1,600 acres, including a small project area along Logan Creek in the Town of Jacksonport. In large part thanks to The Ridges, the Town of Baileys Harbor is considered the most biologically diverse in the state, containing both the highest density and the highest number of rare species of any municipality. With over 475 plant species, The Ridges’ boreal forest protects over a dozen rare, threatened, or endangered species, including the state-endangered Northern Comandra, the federally-endangered Hines Emerald dragonfly, and the federally-threatened Dwarf Lake Iris. The Ridges is a State Natural Area, a National Natural Landmark, an Audubon Important Birding Area, a Wisconsin Wetland Gem, and was recently designated as a member site of the international Organizations for Biological Field Stations (www.obfs.org).

While these official designations are obviously significant, Leonard stresses that education has always been a primary goal of the organization, and that volunteerism – usually sparked by education – has always been key to its success. He says he has learned from long-time residents that, “Before The Ridges had ‘official’ trails and the cabins [which house the Nature Center and store], people use to knock on Olivia Traven’s door asking for a tour of the sanctuary. People remember Emma Toft rounding up the local kids and driving them out to The Ridges/Toft Point in her station wagon.” (Interestingly enough, Olivia Traven’s door is now Leonard’s door:  after he and his family moved to Door County, they ended up buying Olivia’s former home from her son, Lee, who has also been very involved with The Ridges throughout his lifetime.) 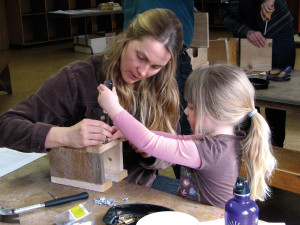 Vinni Chomeau and her daughter, Taylor, at a Ridges educational program. Photo courtesy of the Ridges Sanctuary.

visit to The Ridges wasn’t when he was a kid, it still made an impression. He recalls, “I was at the Door-Kewaunee Normal School, and our social studies teacher, who was teaching me to become a teacher, brought us in ‘49 or ‘50 to Door County, and we visited 8 or 10 different spots. At The Ridges, we just parked on the road and walked around the Range Lights, but I thought it was a neat place. After I started teaching at the Fish Creek junior high, around 1967 or so, I started to take school groups there.”

In recognition of the important educational role The Ridges has played, Leonard explains, “Our education programs will be the focus of our 75th anniversary in 2012. That programming is also why we’re planning for a new interpretive center – to be able to better tell our cultural and natural history, to inspire others for many generations to come.”

And, while the plan is to develop a facility that is much more conducive to educational and research programming than the existing 19th century cabins, Leonard is careful to note, “We don’t want to change the character of The Ridges with any new development. The Ridges wants the community to help define the future of The Ridges, including the new facility.”

As such, Leonard indicates that the sanctuary has hired University of Wisconsin – Stevens Point (UWSP) to facilitate the process of talking with individuals, focus groups, and different audiences to understand connections between community needs and the programs to address those needs, and to help develop a sense of place, which is critical for The Ridges and Door County.

Those already familiar with The Ridges should make sure to visit the UWSP website (www.uwsp.edu/cnr/schmeeckle/ridges/) to offer input on the future of the organization and its facilities. For readers not already familiar with The Ridges, be sure to make this the year you visit, whether for an organized program or simply for a self-guided hike. You are sure to be enchanted and inspired, like generations before you and generations to follow. 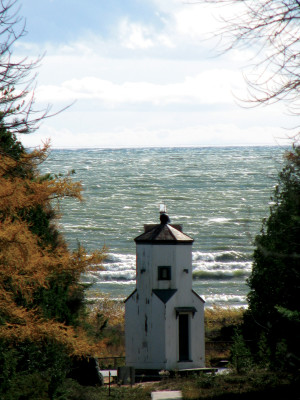 The Lower Range Light has stood for 142 years, first as a guide to ships entering the harbor. It has become an icon of the unique area of biodiversity that is The Ridges Sanctuary.

Built in 1869 and fully operational for the 1870 shipping season, the Lower Range Light is one of two lights that, when lined up one above the other, kept ships from foundering on the rocky underwater outcrops surrounding the harbor. Because of climate and humidity conditions near the water, the structure is once again in need of repair and restoration.

The Ridges Sanctuary has initiated a year-long effort to bring the Lower Range Light back to its 1869 condition. The historic restoration planning group, Restore LLC, has been hired to produce restoration plans and cost. The physical restoration will begin in the summer of 2011 and is to be completed by October. A Phil Austen print of the Range Lights is offered to anyone who donates over $50 to the restoration effort.

Trails:  The Ridges Sanctuary contains approximately five miles of trails which are open daily year-round to the public for hiking and snowshoeing. Maps are available at the Nature Center, on County Highway Q, or on the website. $4 for adults (free if under 18 or, if you are a member, unlimited trail use is included in your membership).