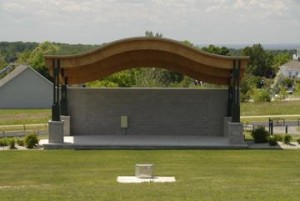 Music is all around us. We hear it in the supermarket, driving in our cars, even in the elevator. It’s our background noise, our grease for the daily grind. In a world in which music is in danger of becoming a commodity, the free Sunset Concert Series at the Peg Egan Performing Arts Center (PEPAC) offers a chance for people to reconnect with music.

Musicians such as Seagull Swall, Willy Porter, Dorothy Scott and Sloan Wainwright will perform in a new venue that serves as a fitting tribute to a woman who loved music.

The late Peg Egan was a lover of music who was involved with the Peninsula Music Festival, put herself through college through music and was active with it throughout her life. Her son Kevin said “music was her whole life,” and he donated the structure in honor of her.

The land the center now sits on was first purchased by Eames Farm, a condominium development abutting the property, in an effort to restrict development on the land, but the owners eventually decided to donate the land to the Village of Egg Harbor under the condition that it would be used as a cherry orchard.

Former Egg Harbor Village President Bruce Hill said the original plans for the land were to turn it into a ‘cherry heritage’ park. That plan was scrapped when the village discovered they could not open the orchards to the public due to spraying of chemicals on the trees. After Kevin Egan approached the board with a proposal to donate a performing arts center to the village, it was finally agreed that the cherry orchard would be preserved, and the performing arts center would be built alongside it. A band shell was donated by Ralph Bergman, Seaquist Orchards planted the cherry orchard, and a little extra money from the Village of Egg Harbor helped complete the project. In the end, private donations totaled $900,000.

Those donations have today given visitors a beautiful setting in which to experience entertainment. Located on Church Street in Egg Harbor, it was built beside a cherry orchard on the hill overlooking the village and the bay. Sitting on blankets and lawn chairs, attendees at the free Sunset Concert Series can experience quality music in a relaxing setting where they are encouraged to dance, laugh, and let their hair down.

Terry Lundahl, owner of Dragonfly Agency LLC and the executive director of “The Art of Music” National Tours, which booked the series, said she was looking for acts that “…can give a ‘full-blown performance,’ are nationally recognized, and are incredible instrumentalists.”

The acts are family-friendly and appeal to a wide range of people, a fact made evident by the crowd of over 300 people who attended the first show June 15.

The PEPAC is available for all kinds of performing arts events, not just music. Door Shakespeare Company performed there, and community members are strongly encouraged to use it for events and should contact the village office to do so.

The people who’ve developed the PEPAC hope it becomes a part of the community that many people will use and enjoy.

“The worst thing that could happen would be that the building goes unused,” Hill said. “It not just a piece of artwork to be stared at.”

Through the hard work and generosity of many, Egg Harbor can now offer people a way to get out of the daily rush and experience music and the arts in the exhilarating, moving way that only live performance can provide.