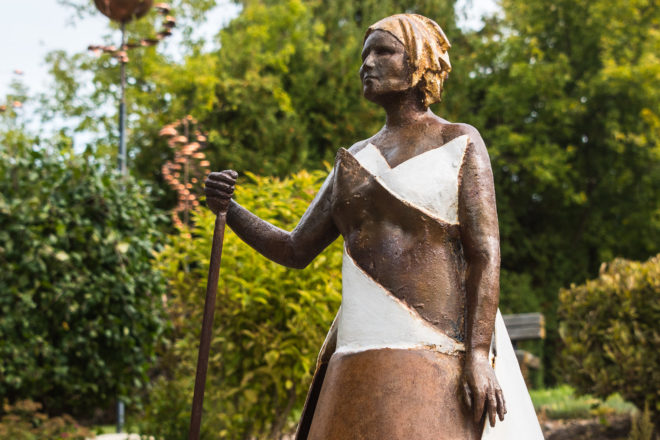 When she operated Dovetail Gallery in Egg Harbor for 21 years, Kathleen Mand Beck expended a lot of brainpower on how to get people into the gallery.

That eventually led her to the idea that art isn’t a place and it doesn’t stop at the gallery door.

She sold the gallery four seasons ago, but all the thought she put into public viewing of art serves her well today as chair of the Public Arts Initiative of Egg Harbor. Visitors to the village can’t help noticing art popping up all over the place, including the piece of architectural art that opened this year in the form of the Kress Pavilion.

“It’s an art piece itself,” Beck said of the pavilion. 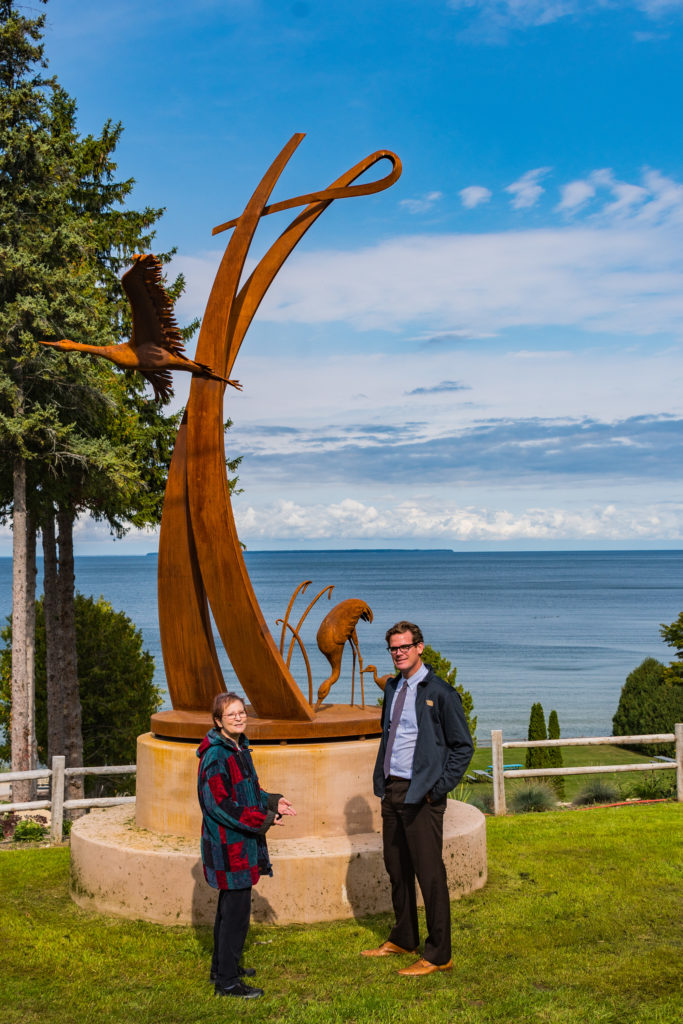 “Since Ryan arrived three years ago, he has and continues to cultivate community through public art, sustainability programs and community engagement,” Beck wrote in a letter successfully nominating Heise for the Arts in Community Award sponsored by Arts Wisconsin and the League of Wisconsin Municipalities. The award honors Wisconsin communities and civic leaders for championing the arts as integral to economic, educational and community vitality and success.

Last week she learned that Heise is one of the two winners of the 2018 award – the 10th annual award – which will be presented Oct. 25 during the League of Wisconsin Municipalities’ 120th annual conference in Wisconsin Dells. He is also the first Door County resident to be recognized with the community arts award.

The award is a piece of art – a unique work of glass art designed and created by Maatwerk Studios in Blue Mounds, Wis. The other winner is Ken Juon, president of the ArtStart Board of Directors for the destination cultural center ArtStart in Rhinelander.

While obviously honored to be recognized with the award, Heise said he is just doing what he was hired to do.

“The village has made public art and sustainability part of the mission,” he said.

But in her nomination letter, Beck cited Heise for suggesting the public arts group separate from the village and reform as an independent nonprofit group, which, he advised, would not be as hampered by conducting business as a village entity is, a move that has paid off, Beck said.

She also referred to him as “the middle man” among the various entities trying to make the Kress Pavilion happen, and said he led the public arts group to develop policies and procedures for public art exhibits.

She also cited his vision to restore the original stonework at Bay View Terrace as a contribution to the aesthetic appeal of the village.

“The Village’s Bay View Terrace became a beautiful place to rest and reflect with Ryan’s leadership,” Beck wrote. “He worked with the Village’s Public Works crew to restore the original stonework and create plantings in a wonderful natural setting that overlooks the Green Bay waters.”

She said his “work has extended far and wide” through the village and added that “his enthusiasm and professionalism are always fresh and sincere.”

“Ryan believes that when the Village or municipality has its affairs in good order that art is possible and can become a focus of all entities in a community,” Beck wrote.

The nomination included a letter from Deputy Administrator Megan Vandermause, who cite’s Heise’s “dedication to advance the Village in not only the arts, but also, sustainability, economic development, and public engagement.” Village President John Heller wrote that Heise is “a tireless proponent of all aspects of art in the village” and “has ushered the necessary leadership to make events happen.”

The final letter of endorsement came from architect James Vander Heiden, a village resident who recently retired as principal architect at HGA Architects, the firm responsible for designing the Kress Pavilion. He credits Heise for giving positive leadership through the Kress Pavilion process that was already underway when Heise was hired by the village:  “In my opinion, Ryan’s leadership of a process that included a diverse village board, several committees, donors, and the local business and arts communities has made a significant impact on the resulting new facility, and the community arts programming that has already evolved.”