Every community has a plan, but they don’t all have a vision. Vision requires knowing your place in the scheme of things.

“We don’t want to be the gateway of Fish Creek. No, no, no. This is Egg Harbor,” said Josh Van Lieshout, administrator of the Village of Egg Harbor. 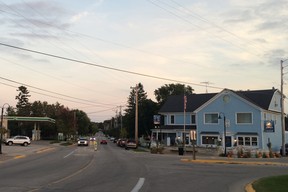 A web of powerlines weaves over Egg Harbor. Parking, center, is bumped out in 3 – 5 stall blocks.

Like many communities, Egg Harbor has plans in bound books on shelves in the village office, but the people entrusted with those plans are ready to put them in action.

“It’s a good time to do it,” Van Lieshout said. “There shouldn’t be any surprise to anybody. Maybe if there is surprise, it’s that somebody is actually taking the plan off the shelf and we’re going to try to implement something.”

The vision for downtown Egg Harbor, which was first articulated in the 2012 Downtown Mixed-Use District Redevelopment Plan, turns the Hwy. 42 corridor into a more pedestrian friendly space with wider sidewalks (“I don’t even want to call it a corridor,” Van Lieshout said. “It’s Egg Harbor Road.”).

“Right now the sidewalks are only 5 feet wide,” Van Lieshout said. “That’s not wide enough. That’s designed for two people, and I think we all know in the summertime we have more than two people. Our sidewalks don’t have enough capacity for pedestrians.”

On-street parking is another aspect of the process.

“Our on-street parking is a nightmare. It’s hard to park in and it’s hard to maintain, and we think we can do better,” Van Lieshout said. “Get rid of two and three stall things, make it so you can swoop in and swoop out.”

Doing these things will give the illusion of narrower traffic lanes without actually narrowing the 12-foot lanes.

“We know people typically drive at a speed they feel is safe, so by narrowing things up and pulling the crosswalks further into the street, that should make a feeling of things being a little bit smaller and should force drivers to slow down.”

The final piece of the puzzle is burying the web utility lines that crisscross the village.

“That’s a big project,” Van Lieshout said. “There’s electric, telephone, cable, who knows what else is on that thing, and all that has to be dealt with. That’ll be a challenge. That’s the one area where we’re going to need some experienced partners.”

Van Lieshout said he and the village trustees realize it’s an ambitious project, “but as we look around with a critical eye for the future, our downtown corridor is not in the best shape and needs some improvements. This is as good a time as any to do those.”

Van Lieshout said he recently sent out requests to engineers and planning firms the village has worked with in the past to make presentations to help the village carry out its vision. They have been asked to appear before the Parks and Public Works Committee at 9 am on Jan. 22.