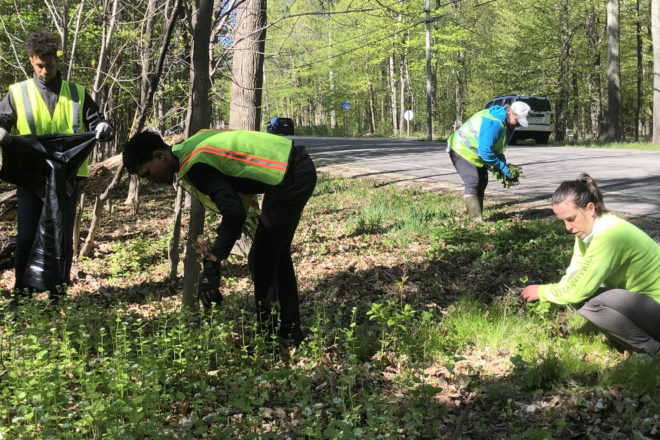 State and county governments have neither the human nor the financial resources to slow the spread of garlic mustard, so instead, it takes a village – or a neighborhood – to wage war on an invasive species that can outcompete native wildflowers and plants and take over vast swaths of undergrowth.

This month, the Village of Egg Harbor, along with residents of the Point Beach neighborhood, organized a garlic-mustard pull along a mile-long stretch of Horseshoe Bay Road (County G).

“I don’t think we’re going to win today,” said resident Tom Strong of the uphill battle against the persistent invasive.

He said curbing the spread of the white-flowered, early-spring bloomer will require all property owners and volunteers to take action and remain vigilant. That’s especially true because many larger governments have given up on trying to eradicate garlic mustard, in part because private property owners can harbor it and allow it to spread further.

Samantha Koyen, leader of the Door County Invasive Species Team, was at the gathering that started at the home of Ken and Shawn Mathys and told the group that garlic mustard is a restricted species in Wisconsin, meaning that people may not share or move it. Still, its presence allows each plant to spread up to 1,000 seeds by various means, ranging from traveling on the soles of shoes to riding on the legs of deer.

Koyen said Wisconsin’s invasive-species rule, Chapter NR 40, does not prohibit residents and property owners from possessing or unknowingly having garlic mustard. Counties may not list garlic mustard as “prohibited,” but municipalities can, and that’s the case in the Village of Egg Harbor.

“The village has gone above and beyond that,” Koyen said. “They have decided that you have to do something.”

The village’s ordinance prohibits the plant rather than keeping it “restricted.” She said that’s an important step in conserving and protecting native plants.

Shawn Mathys, a village board member and master gardener, said the garlic-mustard pull this month is a way to raise awareness and encourage residents and owners to take action on their properties.

Garlic mustard has a two-year life cycle. The plants have rosettes of round, toothed leaves encircling the stalk, and in the second year, they produce a small, white, four-petaled flower on top in early to mid-May.

That’s a good time to try to pull them out by the roots. Then they must be bagged, not dropped in place, because they will finish producing and releasing seeds even when they’re out of the ground, Koyen said. She encouraged people to clean their shoes and boots before entering nature preserves or walking into or out of local woodlands.

Garlic mustard not only gets a head start on native plants in the spring, but it also inflicts harm.

“It is allelopathic,” Koyen said, “meaning it alters the soil structure it penetrates and stops certain plants from being able to grow.”