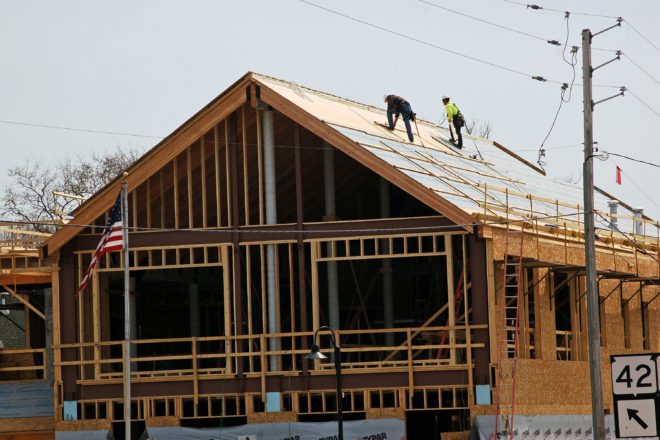 Shipwrecked rises from the ashes that gutted it last year. Photo by Jim Lundstrom.

If you haven’t been to the Village of Egg Harbor in a while, things have changed. A lot.

Door County’s first craft brewery, Shipwrecked, has risen from the ashes of the fire that gutted the building last August and should be open next month.

Just to the south, Hatch Distillery is preparing for a July 4 opening.

In between the two, Pam and Richard Wegner have opened the 20-tap Liberty Ale House in Liberty Square Shops.

And across the street from them, One Barrel Brewing of Madison has an accepted offer on a building in order to establish a second brewery in Egg Harbor.

And, looking over all this activity from the top of Church Street is the new Kress Pavilion and Egg Harbor Library, which has been in use since the start of the year but was formally dedicated on May 19.

“I think it boils down to a good group of trustees with a vision,” said village Administrator Ryan Heise about all the activity in the formerly sleepy little village of 200-some year-round residents. “They have thoughtful discussions and understand that they have to make decisions that not everyone will agree with, but they have the vision to make those decisions.”

Chris Roedl of Hatch Distillery agrees. “The village has been very supportive,” he said. 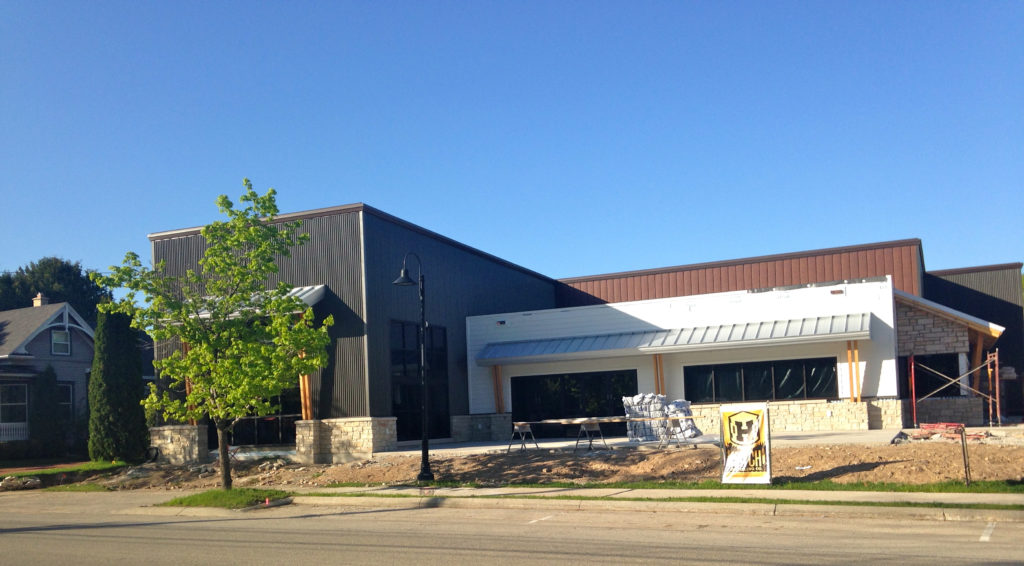 During a recent visit to the Hatch Distillery construction site, workers were busy on the physical building and Roedl is overseeing that and the installation of the distilling equipment, but his mind is also thinking of another aspect of the operation.

“Besides all this going on, it’s bee season,” he said.

All of his clear spirits will be made with honey. He has 50 hives now and plans to double that by the end of the season. He said each bottle of clear spirit will include more than one pound of honey.

In addition to local honey, Roedl has been working with local farmers such as Door Karma Farms to source grains for his other distilled products.

Of course, you can’t start something like this from scratch without some concomitant headaches, for example, running up against government bureaucracy.

“We’re one of the few doing honey, so that’s really thrown them for a loop,” Roedl said. “As long as you’re making a gin or vodka, they don’t want to see a formula, but when they heard I was using honey, they wanted to see the formula. And then the hoops I had to jump through to prove that I was distilling it to a neutral spirit level and all those kinds of things, it was a little much. This isn’t different from a grain neutral spirit. It’s just that our base fermentation sugar is honey. It’s been a couple more headaches, but that’s our motto, no shortcuts.”

Even when he is ready to open in July, Roedl will not be prepared to serve all his own liquors, so he has been seeking products from other distillers.

“I got some bourbon from Death’s Door Distillery in Middleton,” he said. “My framework was, if I can’t sell my own, I still want to touch Wisconsin. I’ll serve theirs until ours is ready. I just didn’t want the pressure to bring something to market. I want to bring it when it’s ready and when it’s our best foot forward.”

He was excited to score three barrels from an Iowa distillery that had aged Iowa corn bourbon in former Scotch whiskey barrels. He puts his head down in a space between the barrels and breathes in the peaty residual notes that still permeate the barrels.

“I could do a headstand in there,” he said. “It will have a peated note to it. You either love it or hate it, I found. I appreciate it.”

He added that the bourbon aged in the three barrels will only be for sale at the distillery.

Roedl is also excited by the prospect of One Barrel Brewing moving in next door to him. He and owner Peter Gentry have already discussed some collaborations that could happen if all pans out for the brewery.

“I think Egg Harbor is going to be a busy place this summer,” Roedl said.

Jess Reinke is also expecting a busy summer at the Kress Pavilion, where she serves as event director and property manager. The first wedding celebration at the property takes place June 2.

Seven more weddings have already been scheduled there for 2019. The number of nonprofit organizations booking the building is constantly growing, she added. 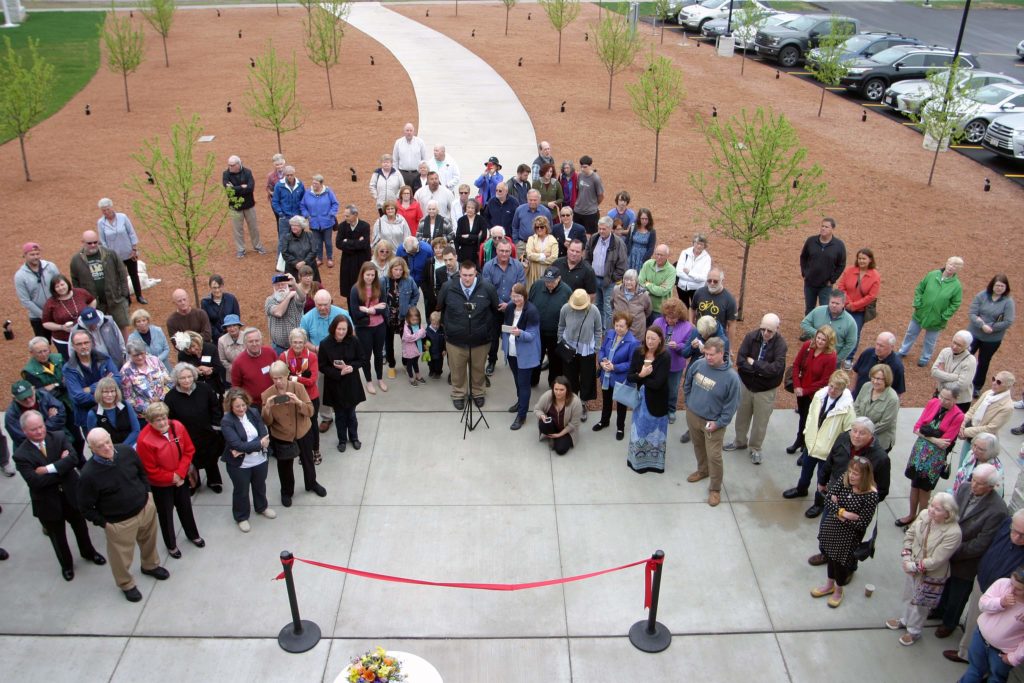 The Kress Pavilion is already slated for a busy year after its grand opening.

“We’ve got a really great nonprofit rate,” she explained.

Since the building opened its doors to the public with a New Year’s Eve celebration, Reinke said the building has hosted a variety of paid and free public programming.

She said those who use the building rave about the technology and the views. She mentions that when the Door Community Auditorium held its annual spring shindig to announce the coming season’s lineup, the DCA sound techs “were blown away by how intuitive everything is,” she said.

“Everybody comments about the view,” she added. “It’s unlike anything else in the county. We offer a pretty unique location.”

“We are getting recognition across the state,” said Administrator Heise. “People are coming and experiencing the Kress Pavilion, people who have experienced a lot of construction. They’re saying this is different, this is unique. It’s all part of building for the creative community.”

The building was formally dedicated on May 19, with namesakes Donald and Carol Kress cutting the ribbon and Judy Ortiz, who led the initiative for the building, gave a timeline going back to 2012 when Miriam Anderson gave the first donation.

Before cutting the ribbon, Donald Kress said it was an honor to work with all the people who made the building happen.

“We love living in Egg Harbor,” he said.

He also shared the story of a friend who asked why he and Carol were so fired up about the community pavilion and library.

“When I see a child reach for a real book with wonder in their eyes, when I see a couple newly married having their first dance in the great ball, or when I see an older couple like us celebrating their 50th wedding anniversary, there’s going to be a little tear in my eye and I’m going to say a little prayer of thanks,” Kress said as his response. “May all who enter these doors be blessed by God, may they find welcome, may they be wanted and may they feel they are at home. More we could not ask. Thank you for allowing us to be a part of it.”

“I feel like Sister Bay was the municipality everyone was talking about last year and their growth,” Heise said. “I feel like Egg Harbor is going to be the new village to talk about. That scares people. Legacy families and people who have moved here recently.”

But all these changes were considered by trustees, and the direction is set.

“Egg Harbor is expanding its creative economy,” Heise said. “Development for development sake is not good and doesn’t represent smart growth. Promoting sustainability, expanding the arts and improving walkability/bikeability in the village appear to be goals that most can agree on, and are certainly objectives supported by the Board of Trustees.”

The village kicked off a bicycle program last year with 14 bikes. Must to everyone’s surprise, they ended the season with 14 bikes as well. Now the village wants to expand the program by having more bikes available.

“That goes back to the leadership,” Heise said. “Sometimes you have to take risks and know that things can go wrong, but at least you’re trying. We’re looking for sponsors for more bikes.”

“We’re focused on making sure we have some beach to go to with fluctuating water levels, and making it ADA-compliant and accessible,” he said. “With the Alpine selling off their property, our trustees are very interested in snapping up some of that to expand the beach. We told the brokers what property we are interested in, and the 200 feet of beachfront.”

There are also plans to continue sidewalks from downtown to County G and the bird trail that leads to the beach.

And then there is the village’s Public Arts Initiative, which expands this year with Celebrate Sculpture 2018, with 23 sculptures on display throughout the village. The latest village sculpture by wrought iron artist Boleslaw Kochanowski will be unveiled and dedicated at 1:30 pm Saturday, May 26, on the beach overlook on County G.