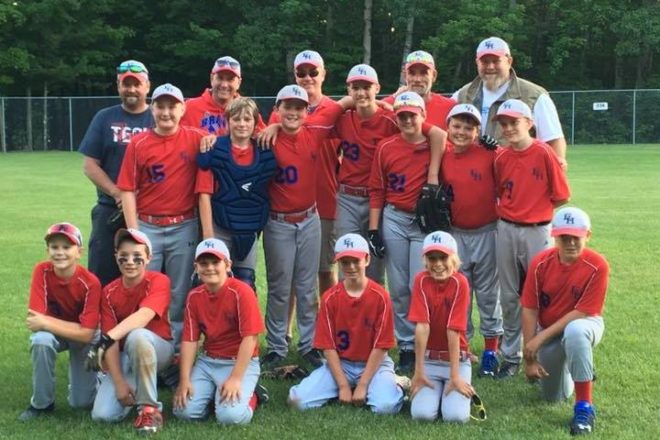 The Egg Harbor Braves took the Nor-Door Little League Championship home during a nail-biter in Ellison Bay on June 21 during their last game of the season, closing out the season with a 7-1 record. Ellison Bay and Egg Harbor had the same records of 6-1 going into the championship game to decide first place.

Egg Harbor jumped out for an early 2-0 lead in the first inning. Ellison Bay fought back to take a 3-2 lead in the bottom of the first. Egg Harbor took the lead back in the fourth inning with a two-out clutch hit single by Jeffrey Mize scoring two, giving the Braves a 4-3 lead going into the fifth inning. James Rericha added a solo home run in the sixth inning. Dominant pitching held off Ellison Bay with great starting pitching by Cal Ellefson and middle relief pitching by Quinn Reinhardt.

Ellison Bay fought back with a three-run homer by Rylan Caldecott. Ellison Bay trailed Egg Harbor by one run going into the seventh inning. Ellison Bay came back and tied the game in their half of the seventh with the score of 7 to 7 going into extra innings. In the top of the eighth, Ellefson had a single and Reinhardt hit a triple to drive in the game winner. Reinhardt was thrown out at the plate trying to add an insurance run.

Crucial defensive plays by Braden Sitte late in the game along with outstanding closing pitching by Braden Kita shut down Ellison Bay in their half of the eighth inning, securing the victory for the Braves.

On behalf of all the parents and players, the Egg Harbor Braves congratulate Coach Brian Reinhardt for his dedicated service to the team and to the Nor-Door Little League Baseball community.