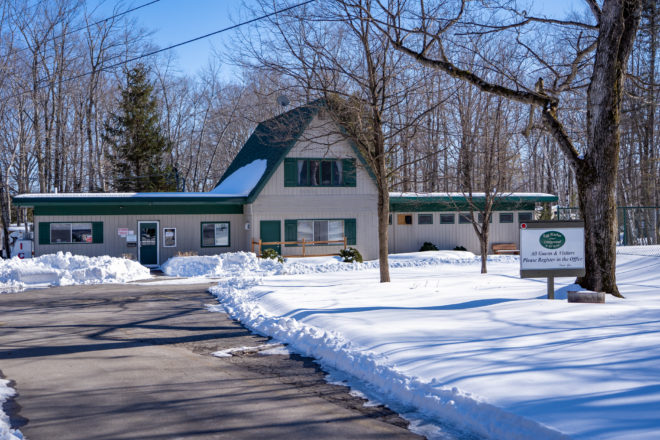 The Egg Harbor Campground was sold Dec. 16, but longtime campers said they didn’t receive any information from the firm that bought the property until March 8, when they received notice that rates were increasing 71%. Photo by Rachel Lukas.

Investment firm aims to cash in on changing industry

Allen Feldman and his wife, Judy, have been seasonal residents at Egg Harbor Campground for 17 years and have spent the winter looking forward to returning to their site. Their summer retirement retreat is a 37-foot pull-behind RV with a queen bed, big-screen TV and quiet neighbors they’ve come to know through years spent at the property tucked into the woods between Egg Harbor and Juddville.

Allen works part time at Wisconsin Cheese Masters, and Judy works shifts at Settlement Courtyard Inn. But on March 8, they received a letter that put those jobs and summer number 18 at the campground in jeopardy.

After months of hearing nothing from the company that bought the campground Dec. 16, seasonal campers who had put down their 2022 deposit last fall finally got an introduction to new management via a letter dated Feb. 22 but that arrived only this week. It was not the kind of introduction they’d hoped for.

The letter from Advanced Outdoor Solutions announced itself as the new management company for the 160-site campground and informed renters that rates would be increasing from $3,200 per season (May-October) to $5,500 per season: a 71%  jump. For the 60 seasonal site holders at Egg Harbor Campground – most of whom are retired and are drawn to the campground as an affordable piece of Door County – it’s a tough pill to swallow.

Feldman said he signed an agreement before leaving last fall and put down a $500 deposit for the 2022 season.

“To me that constitutes an agreement,” Feldman said. “There’s something wrong here. They want everyone out by the end of March after saying nothing for months. It’s ridiculous. To me it looks like they’re trying to chase everybody out so they can do something else with the property.”

Other residents felt the sting as well.

“That letter was a bit of a surprise, to say the least,” said seasonal resident Tim Trenkle. “We haven’t gotten any communication for months, and then they almost double the price to a level beyond almost everyone. Are you trying to clean the campground out? There are some campers that are probably still frozen into the ground. The level of personal concern is gone.”

But Advanced Outdoor Solutions (AOS) doesn’t own the property. It was purchased by HTR Investors, a Boston-based company whose website says it is “focused on acquiring, developing and managing best-in-class RV, camping and glamping resorts throughout the United States.” Attempts to contact HTR were unsuccessful.

The website for HTR was formed in 2020 to “focus on aggregation, consolidation and operational evolution within the highly fragmented and non-institutionally owned and managed RV camping industry.”

That language is why longtime residents believe the company is playing games to push them off the property and transition to short-term, upscale glamping rentals. According to a January article in Business Wire, HTR has contracted with Oklahoma-based SG ECHO for architectural consulting and engineering services to build RV and glamping units for several of its properties, including Egg Harbor. The company specializes in using recycled shipping containers to create residential and commercial spaces. Nightly rates for glamping sites are generally $120 a night and up, compared to about $20 a night for a 5-month seasonal rental or $35-45 for nightly campsite fees.

A transition in business is one thing, but the lack of communication and late timing have renters at a loss. After months spent trying to get in touch with the new management – or even to find out who the new management was – they got word of the new rates too late to make other arrangements for the summer. On Wednesday, the Feldmans spent the morning calling other campgrounds, only to come up with the same answer over and over: “We’re full.”

Tim Guckenberg, owner of Wagon Trail Campground and president of the Door County Campground Owners Association, said camping has never been more popular. “There aren’t many sites to be found,” he said.

The letter from AOS also imposed a March 31 deadline for renters to either commit to the season or remove their campers from the property. Many renters live hours away or spend the winter in warmer climates, and some worry that they may not even be able to access their camper in the snow.

The letter, signed by Kathleen Walsh, CEO of AOS, includes a phone number and email address for those who have questions, but the number only gives an option to leave a message with an answering service. Several attempts to reach AOS and HTR Investors were unsuccessful. The letter also refers to a registration form that campers must fill out and return, but no registration form was included with the letter.

On Wednesday, one of the seasonal site holders who lives near AOS in Florida visited its offices in person. The person didn’t get answers, but did get a pledge that a virtual meeting would be scheduled this week to address renters’ concerns.

For investment firms, RV parks have become lucrative investment opportunities with some reporting returns of 10-20%, according to information from the commercial real estate investment firm CXRE. RV parks generally require less infrastructure and maintenance compared to other property investments.

Camping was growing in popularity before the COVID-19 pandemic, but it boomed as people sought safe, outdoor experiences and vacations. From 2015 to 2020, camping reservations across America increased 68% on U.S. public lands, and in 2021, an estimated 10.1 million families camped for the first time, according to the 2021 North American Camping Report. Sales of RVs rose 17% in 2020.

Rumors of investors targeting Door County campgrounds to capitalize on the growing market have circulated for several years.

“Every couple months, we get contacted by someone offering to buy our place,” Guckenberg said. “Some are families, but some are larger firms.  We don’t respond because we’re not even thinking about selling at this point, but we could probably sell next week if we wanted to.”

“The last two years, we’ve broken a record every year,” Guckenberg said. “And we’re on track to again this year. June, July, August, we’re having trouble fitting campers in on one site. They’re going to have to move around.”

But he said it won’t last forever.

“I have a feeling there’s gonna be a glut of used RVs on the market in a few years as people get back to the life they had before COVID,” Guckenberg said.

But as investors move into the marketplace, Steve Pederson, a seasonal resident at Egg Harbor Campground since 2005, worries something will be lost.

“It seems to me they’re trying to force all of the seasonals out of there,” Pederson said. “They’re turning family-friendly campgrounds into glamping.”

“We have very good relationships with our seasonals,” he said. “It sounds corny, but they’re like family. We see them every day. And it’s a way for people without a ton of money to have a place in Door County. That’s their second home. Some we have payment plans for. Upping it like that basically shuts out a lot of normal people.”