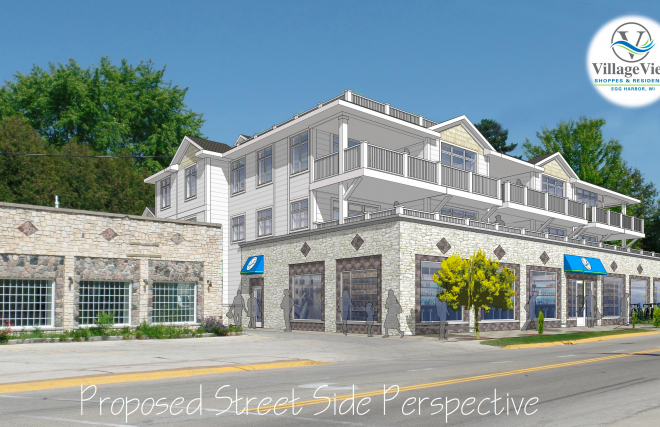 The plan for a 14-unit condominium and retail complex in the center of Egg Harbor has one more hurdle to clear.

The Egg Harbor Plan Commission instructed Administrator Ryan Heise, attorney James Kalny and staff to outline a set of detailed conditions for the commission to consider for approval during its next regularly scheduled meeting Aug. 18. Commission Chair Joe Smith said the village should be more specific in drawing up details in a Conditional Use Permit for the complex after issues with previous agreements.

“What happened with One Barrel is [that] we didn’t put in the conditions we needed to,” Smith said, referring to vague language in that permit that has led to battles about parking shortages at the taproom. Smith requested language requiring that any deviation from the approved site plan be submitted to the commission for approval.

The proposal for what is being called the Village View Condominiums calls for 14 residential units and two commercial units on the site that is now home to Mueller’s Mini Mart. The plan has been scaled down from the 27 total units originally proposed, and it would preserve the former Birnschein gas station. The condominium would have three stories and a utility room for stairwell and elevator access to the roof if a height variance is approved for the elevator. The location has been a gas and service station for much of the last century, but the property has been for sale for several years.

The developers are requesting variances for building size and parking setbacks. The village’s maximum allowed floor area is 18,000 square feet. The footprint of the new building is 11,976 square feet, but the total square footage of all three stories would be 34,642 square feet.

Four people spoke during the public-hearing portion of the meeting, transacted through a combination of in-person presentations at the Kress Pavilion and via Zoom.

“They’re asking for a huge variance with this,” Cambria Mueller said. “This is double the size we allow in that district. Once you open that can of worms, you can’t stop it. It’s right in the heart of downtown Egg Harbor. I ask you to consider that very carefully. It’s okay for one building maybe, but what if a lot of them start popping up?”

Angela Lensch, a village trustee, said the developers are asking for “big exceptions that we’ve never granted before.” She implored the commission to require detailed plans for water-quality protection, site maintenance, screening and contingency planning in case the development doesn’t come to fruition.

“You’re asking a lot from us, so we should ask a lot of you,” she said of the developers.

The project would not be the first large-scale development in the village. The Landing Resort, Newport Resort, Main Street Shops and Liberty Square (now Fireside) were all built or have been significantly expanded since the mid-1980s. At 35 feet tall, Village View Condominiums would be roughly the same height as neighboring Mojo Rosa’s, Greens N Grains, Shipwrecked and Door County Nature Works.

Smith said the building fits with other structures downtown and liked the design and continuity of the stonework that’s planned to match the historic Birnschein building to the north.

“The people working on this should be congratulated for adapting and preserving that beautiful old building,” TC Johnson said during the public-comment session.

Commissioner Kathy Navis said the proposal largely fits with the village’s plans to push housing into the downtown core area.

“If there’s going to be density beyond [what’s] permitted in zoning, it should be in the downtown area,” Navis said. “They arrive; they park their cars; and they don’t have to get into their car again. Something I’m still a little concerned about is how we tie the building next door into this project with landscaping and design.”

The commission discussed implementing protective covenants to tie the two lots together and commit the developers to the project long term, which developer Mike Schwantes said he’s happy to agree to.

The combined redevelopment would provide 40 parking spaces: some in a first-floor garage, and others at surface level with permeable pavers. According to the plans, the development would reduce impervious surface on the lot by 800 square feet. The proposal calls for removing the existing asphalt in front of the original building and replacing it with lawn-and-paver parking, and installing a shared driveway between the buildings, with parking in the back.

If approved, developers said construction would begin no sooner than mid-October, with any blasting and drilling work taking place in early November.

The commission will meet again Aug. 18, 6 pm, via Zoom to discuss conditions for the project and potentially approve the plan.