A clearly frustrated board of trustees decided to take a little more time to decide on new referendum language at a special board meeting Monday evening at the Paul Bertschinger Community Center.

Board members appeared weary and short on patience as they parsed words that will appear on a July 28 ballot, a date decided at last week’s special meeting. A referendum to build a $6.6 million marina failed May 26. Trustee Mike Fitzgerald brought forth a language recomendation from the dock committee formulated at a meeting earlier in the day based on work done by a special citizens committee. Fitzgerald did not endorse the recomendation, and expressed several reservations with the proposed language that would have capped all marina spending, including engineering and design work already completed, at $6 million. 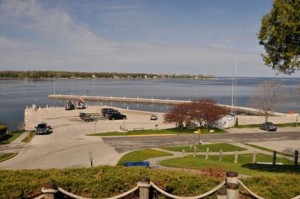 Fitzgerald said he did not believe the plan suggested by the citizens committee could be completed under current permitting and would not necessarily receive the same grant funding awarded to the previous plan denied by voters by an 87 – 81 tally. That plan was awarded a $1.185 million grant by the Wisconsin Waterways Commisssion.

Nancy Fisher said her position is that the village should go back to the voters with the same plan, but with a breakwall lowered from 10 feet above datum to 8.5 feet above datum, and with the same $6.6 million spending cap. The rest of the board appeared to agree with Fisher, but decided to put off a formal decision until they could get exact mill rate impacts to include in the referendum language. The board will meet again Wednesday at Noon to formalize the decision.