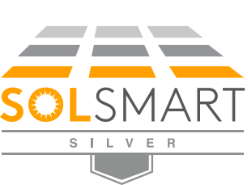 Village makes it easier for businesses, residents to go solar

The Village of Egg Harbor recently earned a SolSmart Silver designation, making it only the second municipality in Wisconsin to earn silver status from the solar-recognition program funded by the U.S. Department of Energy. The northern Wisconsin city of Ashland is the other silver designee.

Megan Vandermause, the village’s deputy administrator and deputy clerk-treasurer, led the charge in earning the designation, which, she said, came out of the village’s involvement in joining the Green Tier Legacy Community program in 2017. It was the first community in Door County to do so. Green Tier is a voluntary program that recognizes and rewards municipalities for environmental performance. The idea is to go above and beyond required environmental improvements.

The SolSmart program was launched in 2016 with the notion that willing local governments are the best advocates to advance solar power in their communities by eliminating bureaucratic red tape and costly, burdensome requirements for installing solar systems. Since the launch, more than 275 municipalities and counties have achieved SolSmart designation with the goal of “making it faster, easier and more affordable to go solar.”

Those seeking SolSmart designation get technical assistance from experts around the nation in meeting goals. In Egg Harbor’s case, it came from Eric Rehm, a St. Paul, Minnesota-based solar finance manager with the Midwest Renewable Energy Association.

“Yes, I had the privilege of working with Megan over the past several months to assist the Village of Egg Harbor earn Silver SolSmart designation as the village’s SolSmart adviser,” Rehm said. “Over the course of 2019, I was able to work closely with Megan to evaluate the village’s current permitting, planning, zoning and development policies and identify opportunities to better align, enhance and update policies and ordinances in ways that foster local solar PV [photovoltaic] development to benefit the community and enhance economic development as a result.”

Rehm said the village is “well poised to provide values to community members seeking to go solar now and in the years to come. The real recognition for the outcomes goes to Megan and her capacity, dedication and collaborative efforts to make the community she serves more solar ready.”

Vandermause said the village hopes to set a solar-power example with two projects: the Kress Pavilion and the village’s wastewater treatment plant, which an energy audit during the Green Tier process identified as the biggest energy user in the village. Village officials have discussed offsetting some of those costs with solar power.

“We already have conduit to the west lawn of the Kress Pavilion pegged for solar installation,” she said. The next step is identifying grants and applying for them to help pay for the cost of the municipal solar projects.

Vandermause said she hopes those projects will inspire businesses and residents to invest in solar power.