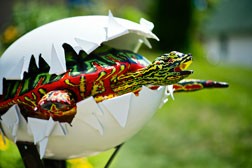 The Egg Harbor Public Art program, a committee of the Egg Harbor Village government, has organized the Egg Harbor EGGstravaganza for the enjoyment of locals and visitors alike and to celebrate the village’s 50th anniversary. Egg sculptures designed and created by amateur and professional artists are on display through the middle of August. The eggs will be auctioned off at a gala on August 23.

The Public Art Committee was formed three years ago and is devoted to bringing art to the public spaces of Egg Harbor, to enhance the beauty of Egg Harbor. There are several sculptures located around the village already and the committee hopes to keep adding pieces, but not overshadow the natural splendor of the area. Those wishing to tour these works can pick up an Egg-Splore Egg Harbor arts map from the Visitor’s Center.

The EGGstravaganza has been in the works for quite some time, and originated when the Public Art Committee realized that the village’s 50th anniversary was just around the corner. They wanted to have 50 of something to celebrate – eggs seemed a natural fit – and the EGGstravaganza was born. The original concept comes from the CowParade, which was founded in 1999, and the EGGstravaganza follows the structure of that operation fairly closely. This concept has been customized and applied in many places, probably most familiarly to Pulse readers in Sturgeon Bay with Sturgeon Around the Bay. 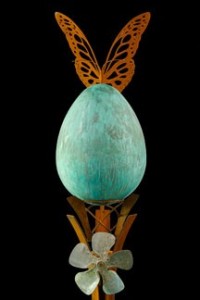 To begin, the Egg Harbor Public Art Committee issued an open call to artists, outlining the process for applying. Artists were required to submit their design ideas by July 31, 2013. A selection committee then chose the 50 best designs, based on marketability, technique/craftsmanship, and creative/design. Artists were notified by September 30 and then had the winter to create their egg.

The artists followed strict design requirements regarding the size of their egg, but otherwise were given the freedom to create whatever they saw fit. They had the option of working from a pre-made base egg to paint or adorn according to their design plan or to sculpt or build their own. Since the eggs will be on display outdoors within arms reach of children and pedestrians, they required sturdy construction and the ability to weather the elements. Once the eggs go to their permanent homes following the gala auction, they will likely be displayed outdoors as well, so the artists had the extra challenge of creating a piece that will maintain its integrity for many years of changing seasons. 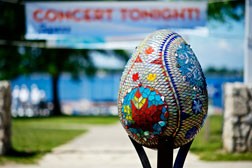 Egg Harbor artist Margaret Lockwood has been involved with the planning of the event and also designed and created one of the eggs; hers is entitled “Someone Untied the Moon.” She describes it as a homage to Frederick “Doc” Heide and the late Fred Alley, American Folklore Theatre co-Founders and musical collaborators. She used glow-in-the-dark paint on the stars and moon, and there are lyrics from the song of the same title, which was written by Doc and sung by Fred. She’s proud of her work, but says that many of the other eggs outshine her piece. “Some of the eggs are just complete pieces of sculpture,” according to Lockwood, they’re, “unbelievable things.”

Contributing artists Karin Overbeck and Ed DiMaio teamed up to create an egg for the EGGstravganza, called “Seed of Life.” According to Overbeck, “There’s some really nice eggs out there – but mine’s the heaviest.” The egg was her winter project, and has two layers of metal lath and four layers of cement on the base, which is covered with pottery and mosaic work (the majority of Overbeck’s work is in mosaic glass and stained glass), and represents Mother Earth, birthing the egg with its petals opening up to display a labyrinth, the seed of life, which represents a person’s spiritual journey on Mother Earth. She said it is built to be outside in a garden and left there – it will last through years and does not need to be brought inside in the winter. Overbeck says, “I think it will be a nice piece in somebody’s garden,” and she is even considering purchasing it for her own, if the price is right! 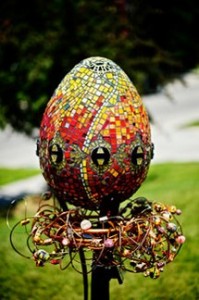 When the eggs arrived for installation, the committee was gratified; Lockwood says, “To have the actual eggs appear – they’re even better than we dreamed.” The eggs were installed by the Egg Harbor maintenance crew, who built the stands and who, according to Lockwood, have been amazing to work with and instrumental to the success of the project.

Now that the busy installation period is at an end, the Public Art Committee is turning its attention to organizing the gala, which will be held on August 23. The eggs will be auctioned off to the highest bidder, with half of the proceeds from each egg going back to its artist and the other half benefitting the Egg Harbor Public Art program. Detailed information about the gala is forthcoming.

For a complete listing of contributing artists, along with more information about the EGGstravaganza, visit EggHarborEGGstravaganza.org.