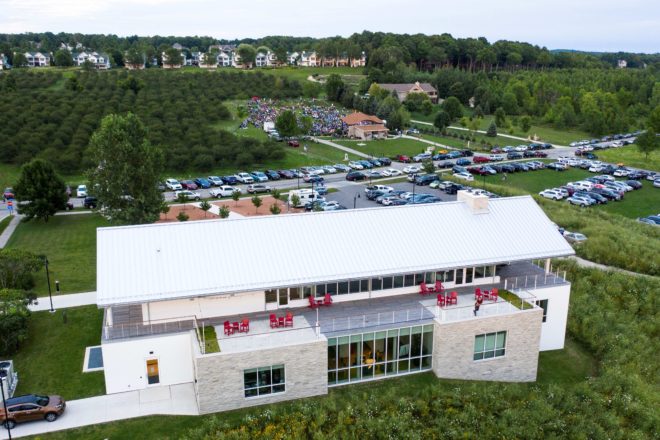 Church Street in Egg Harbor as seen during a performance at the Peg Egan Sunset Concert Series. Photo by Mark Dexer.

The Village of Egg Harbor has been awarded $1 million in transportation-infrastructure funding for improvements to Church Street, a road to the east of the village that parallels the main highway. The Village will add parking along the street, sidewalks, street lighting and bike lanes.

The funding is part of the Wisconsin Department of Transportation’s (WisDOT) one-time Multimodal Local Supplement Program, which was funded in the state’s 2019-21 budget.

The Village of Egg Harbor’s infrastructure project was one of 33 that were funded of the 461 total eligible applications filed by cities and villages. An ad hoc review committee made up of city and village officials appointed by the WisDOT chose the grantees.

According to WisDOT, a total of 1,596 eligible grant applications were submitted by Wisconsin’s cities, villages, towns, counties and tribal governments. The funding allocation included $18.4 million for cities and villages, $26 million for counties and $28.9 million for towns. The transportation-infrastructure needs detailed in the applications totaled $1.47 billion. Demand has exceeded available funding by more than 1,800 percent.

“We need a long-term solution for funding our transportation network, but we are thrilled that the governor, the Wisconsin Legislature and Secretary Craig Thompson, and his capable staff recognize the need and have done something immediate and impactful,” said Egg Harbor Administrator Ryan Heise. “We are extremely grateful for the grant, and this gives the Village more confidence for future projects that promote safety and health.”

To make state funding go further, the review committee asked the Village for an increased match. The Village will provide a match of approximately $1,600,000 for the Church Street project.

The City of Sturgeon Bay will receive $200,000 for an improvement project on South Neenah Avenue from Oak Street to Yew Street.

“This project will provide an economical mill-and-pave approach to spot-replace failed sections of concrete curbing and replace the asphalt pavement on a very crucial roadway within the City of Sturgeon Bay,” said City Engineer Chad Shefchik.

Mayor David Ward said the street is one of the major entrances to the city.

“Thousands of people travel on South Neenah Avenue daily, and it is one of the major entrances to both the city’s Industrial Park and downtown business areas,” he said. “Completing these improvements will address one of our city’s highest and most visible transportation-infrastructure needs.”