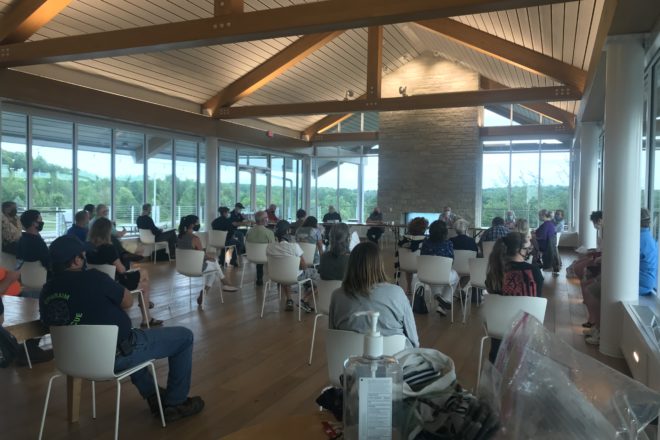 Members of the Egg Harbor Joint Fire Commission – with their fire chief and attorney present – spent the majority of their Aug. 20 meeting behind closed doors. When they reemerged, they said nothing to the crowd about the reason why the crowd had assembled.

What drew people to the meeting at the Kress Pavilion were the leaves of absence requested by firefighters who were protesting decisions made by new Fire Chief Andy Staats. Staats had promoted his wife, Ashley Staats, to captain/EMS crew chief and his brother, Jason, to assistant chief.

The roughly 40 people at the meeting sat in socially distanced chairs with sanitizer available and masks required. They were allowed 10 minutes of community participation before the commissioners went into closed session to discuss personnel matters, as is allowed by Wisconsin’s open-meetings law.

Those who spoke objected to the terminations of Dan Kiehnau and his son, Dustin Kiehnau, both firefighters and EMS personnel; objected to Staats’ decision to promote his family members to the second- and third-highest positions within the department; asked the commission to look at adopting a policy on nepotism; and expressed concerns about public safety, given the number of active firefighters and EMS responders who have left the department.

The crowd left the room once the meeting was closed, but the commission members, fire chief and the commission’s municipal attorney, Randy Nesbitt, remained in full view, given the floor-to-ceiling windows in the second-floor room. There they remained for roughly 90 minutes while the crowd remained outside on the top pavilion. They talked in small groups, watched the sun sink into the waters of Green Bay and offered their reasons for why they were there.

No one spoke on behalf of Staats or his decisions. Some in the crowd were family members or friends of the Kiehnaus or Terry Havel, a department lieutenant who had been demoted and suspended. Others were former firefighters such as Dan Burlo Jr. and his wife, Donna, who had quit the department, along with their son, Joe; and nephew, Matthew, about five years ago over issues with both Andy and Ashley Staats.

“What’s going on right now is just the tip of the iceberg for the disarray that has been happening for a long time,” Dan Burlo said.

Others in attendance were community members who were concerned about public-safety issues in general, nepotism within the department and the elimination of the Kiehnaus, who had more than three decades of experience between them.

“It’s hard to accept they’re willing to lose all the knowledge and expertise they’ve gained,” said Dan Nieson, an Egg Harbor resident who attended with his wife, Penny.

Almost everyone who showed up wanted answers.

“Unless [the terminated firefighters are] not qualified, what’s the deal here?” asked Mary Jo Delorit. “I want a reason.”

She didn’t get that reason. Neither did anyone else. When the commissioners returned, they opened the floor for another 10 minutes of comments – when a few people again objected to what was happening within the department – quickly handled some remaining business and adjourned.

The commission is allowed to discuss personnel issues during closed sessions, but its members must make any decisions arising from those discussions in open session, if any decisions need to be made.

When asked after the meeting whether the commission would take up the same personnel issues at its next monthly meeting, Debbie Wiegand, commission president, said, “Not necessarily.” When asked what the commissioners thought about the concerns expressed by the audience, Wiegand said, “We were all here, and we all listened. I don’t have any thoughts right now for you.”

When asked following the meeting what he thought about the concerns expressed in the room, Staats said, “I understand the concerns. I’m doing everything that I’m able to do to make sure they continue to have medical and fire coverage.”

Many of the questions and concerns pertained to the department’s three highest positions being held by one family. When asked how he would handle discipline of his wife and brother, Staats said, “I hope we don’t ever have to cross that road, but at that point, because of the situation that it is, I would rely on the fire commission more heavily within the discipline area.”

Wiegand was one of the three commission members who had voted in favor of Staats’ officer selections on July 16. The other two were Bill Miller and Rick Malkemus. Clarence Scherer abstained, and Ulla Walser was absent. Bill Edwards cast the sole dissenting vote.

Edwards, when reached the day after the commission’s meeting, deferred all comments to Wiegand. But Edwards did answer why he had voted “no” regarding Staats’ officer appointments.

“It was heading in the wrong direction,” Edwards said.