After nearly four years of discussions, joint meetings and closed sessions, the village and town of Egg Harbor have decided to keep their fire protection arrangement status quo. 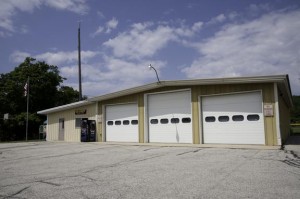 Egg Harbor Fire Station #1, located on Harbor School Road in the village, was built in 1974 and is due for upgrades. Photo by Dan Eggert.

“We recognize the village and the town are served much better by a joint fire department,” said Egg Harbor Village President Nancy Fisher at a joint meeting between the municipalities Aug. 3 in Carlsville.

The town owns that facility, while the two municipalities share ownership of Fire Station Number 1, located on School Road in the village, and all of the department’s equipment. The town owns the fire station on County I in Carlsville, which also serves as its town hall.

By continuing as a joint department, the village retains decision-making authority in its fire protection. If they had sold their share and leased services, they would have had no say in department decisions, equipment purchases, or changes in service or practice.

The two municipalities have shared fire protection costs equally for decades. The village had sought a new arrangement that would shift more costs to the town since it contained more property value. The town balked, and the two boards could not come to an agreement on cost-sharing.

In April, town residents voted in favor of buying out the village share of the fire department at its annual meeting. The town would then lease services back to the village. Up until the end of July, the buy-out appeared imminent, but after more debate, the village ultimately decided that continuing the joint ownership agreement would be in its best interest.

“It didn’t surprise me,” Egg Harbor Fire Chief Steve Schopf said. “We’re stronger operating jointly than we would have been separated.”

The new agreement will not have to be renewed annually, as the old agreement was. The two boards decided a 10-year contract is more functional. The two municipalities will each contribute up to $150,000 to renovate and expand Fire Station Number 1, with renovation work completed by Dec. 31, 2011.

That facility was built in 1974 and expanded slightly in the late 1970s.

“It has more than fulfilled its purpose,” said Mark Bogenschutz, an Egg Harbor Fire Fighter.

Schopf said he had a builder inspect the facility and said it is structurally solid.

“Structurally it’s as sound today as the day it was built,” Schopf said, but the roof leaks, it’s a bit of an eyesore, and there isn’t much meeting space. The last significant money spent on the station came in the late 1970s, when an ill-meshed addition was built.

There had been talk of building an entirely new station at one point, but Schopf said the decision isn’t about bells and whistles. “We’ve always been a little more practical about our spending. What we end up spending will keep our equipment safe and dry.”

The renovation will likely include the addition of a meeting room, which Schopf said will be a big advantage for training.

Village attorney William VandeCastle and town attorney Randy Nesbitt will work together to draft the new intergovernmental agreement. The towns will meet again Oct. 14 at 6 pm at the Bertschinger Center in Egg Harbor.