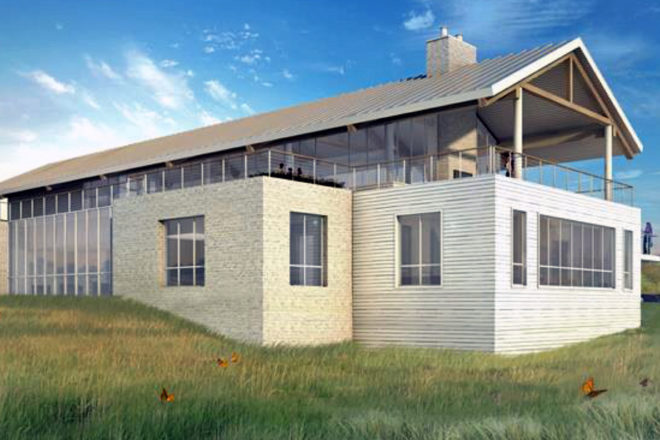 The Egg Harbor Village Board awarded the contract for the library/community center to low bidder Boldt Construction of Appleton at its Jan. 9 meeting.

Attorney Randy Nesbitt appeared for a second time before the board on behalf of unspecified residents who are unhappy with the taxpayer burden of the library/community center. He warned that pledges of money are not enforceable commitments, and unless the village has pledged money for the library in hand, it should proceed with caution lest the taxpayers be left footing the bill for unfulfilled pledges. He also pointed out that the trustees committed to spending no more than $2 million of village money on the project.

Here is the breakdown on where the money is coming from:

Village Administrator Ryan Heise said the next steps are to get a construction timeline from Boldt, remove the Lighthouse Inn from the site where the library will go at the corner of Church Street and Orchard Road, and then begin site work in late February.

A plan by Kathy Navis, owner of Greens N Grains, to buy the Wild Flower B&B on Church Street and move the Lighthouse Inn to that property to create eight living units ran into opposition from other business owners. Navis was not at the meeting to talk about whether she has an alternate plan for the Lighthouse Inn. At a previous meeting, Heise said tearing down the building would cost the village $20,000.

In other matters, Jeff Larson, president of the Egg Harbor Business Association (EHBA), asked the board to consider raising the amount it contributes annually to the organization as well as drop the stipulation that part of the money be tied to a new event in the village.

“We can’t go on and do a new event for ever and ever,” Larson said. In the past the EHBA was given $10,000 by the village for administrative expenses and another $10,000 that was tied to creating a new event. The EHBA is the force behind very successful events in the village, including Pumpkin Patch, AleFest, summer concerts in Harborview Park and Wine Fest, which in its inaugural year in 2016 drew 3,200 people to the village and an economic impact of more than $500,000.

Larson suggested that instead of creating a new event in 2017, the EHBA use money provided by the village to upgrade Christmas decorations, which, he pointed out in a letter to the board, are often paid for by municipalities rather than their business associations.

In that same letter, Larson asked if the village would consider providing a flat fee to the EHBA of $25,000 to $30,000 annually for the next three years, to be revisited at that time. He also pointed out what other municipalities provide to their business/visitor associations:

“We are way down on what other communities give to their business associations,” Larson said.

The board charged Administrator Heise with coming up with a spreadsheet on providing a larger donation to the EHBA and the board will take up the question at its February meeting.

Larson was also there to request closing down Hwy. 42 in the village again for the 2017 Door County Wine Fest.

“I have a problem with closing down 42,” said Trustee Paula Cashin.

“I’m really on the fence on this one,” said village President Joe Smith, who manages Shipwrecked. “Selfishly, it is great to have it right in front of Shipwrecked, but I heard mixed reviews from other stores.”

Larson said the EHBA conducted a survey after the wine fest, and while there were some outspoken opponents, the overall reaction was positive.

Smith said the alternate location of Church Street was presented, but the EHBA opted for downtown instead of the top of the hill. Why, he asked.

“We want them to eat,” Larson said. “We don’t want the town full of drunks.”

Trustee John Heller pointed out that the restaurants are really just a short walk of a couple of blocks from Church Street.

“It needs a tweak,” said Trustee Lisa Van Laanen. “I don’t think it can be like last year, too many people unhappy.”

Smith suggested they put it on next month’s agenda as a resolution to support closing 42, but he also advised all concerned to talk to business owners and think about alternative solutions.

“Get creative with your thinking,” he said.