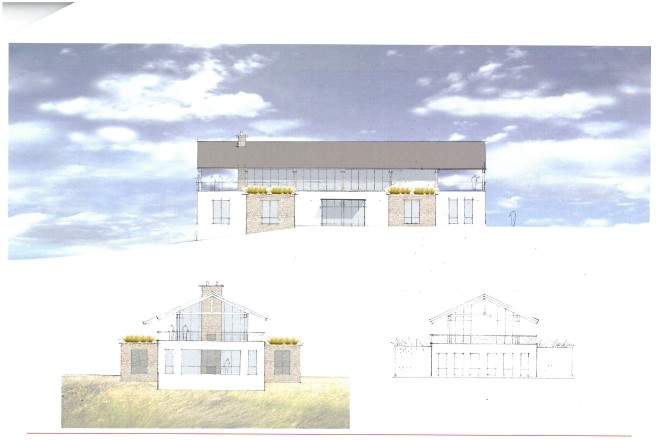 The Dec. 3 meeting of the Village of Egg Harbor’s Ad Hoc Library Committee began with a video presentation by village administrator Ryan Heise, who went up 19 feet in a lift to get an idea of what the view would be should the village decide to build a two-story library/community center off of Church Street, across from the Peg Egan Center.

The hope was that the two-story view would offer a good look at the harbor, but, according to Heise’s video, you really only see a sliver of bay water to the west.

“Regardless of that, you still get a nice view. Sunset would be spectacular,” said committee chair Bob Dickson.

The four design options were named Cupola, Twin Gables, Pavilion and White Barn. Architect Jim Shields, who the Milwaukee Journal Sentinel describes as “one of Milwaukee’s most celebrated architects,” gave the bulk of the presentation based on ideas from the committee for a 9,800-square-foot multi-purpose building.

After the presentations, committee members were asked to name their two favorite designs.

Everyone but committee member Joyce Risser named the Pavilion as their favorite design, and committee member Carol Kress gave both her votes to the Pavilion design, saying it fits the unique artistic feeling of Door County. Shields said he based the design on the Thordarson Boat House on Rock Island.

“This is awesome,” was the response of committee member Kaaren Northrop to the Pavilion design.

Several people also liked the Twin Gables design, but it was a distant second to the Pavilion.

“We can always carry two schemes out, but if this group would give us a singular direction, that would be helpful to keep us on schedule,” Vander Heiden said.

After a brief discussion, the committee decided the HGA crew should focus their attention on the Pavilion design.

The Pavilion, as described by Shields, would be a picturesque 9,800-square foot, two-story building with a gabled roof and a local limestone facade. Downstairs would be the library with nooks for books that could be locked up during off hours, leaving the large library space open. Upstairs is an open meeting hall and outdoor terrace. The building would include four “saddlebags” that would serve as the library work area, a history center, a business center off the municipal offices and a “maker” space for projects.

The committee was then polled for their thoughts on where to locate the building, right on Church Street or down lower on the steeply sloped piece of property. Shields pointed out that it would be more economical to build the Pavilion closer to the street rather than down the slope of the land. 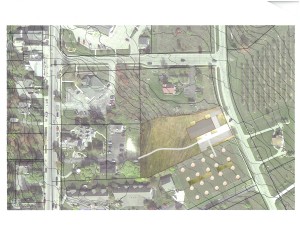 Again, the majority was in agreement that the building should face Church Street, but committee member Steve Hamming said he was concerned about parking in the future.

The committee hopes to negotiate an agreement with the Main Street Shops Association to use a piece of their land for the parking lot, but that is in very preliminary stages of discussion.

Vander Heiden said the design team would come up with two site plans to take into account whatever happens with the parking lot negotiations.

Vander Heiden also said the team will come up with a budget based on the Pavilion scheme for the committee’s next meeting at 1 pm on Dec. 17.

The meeting was then opened to public comment, at which point Sen. Rob Cowles of Green Bay explained that several years ago he had been approached by former village administrator Josh Van Lieshout and former village president Nancy Fisher about selling a tavern and the 1.23 acres it sat on in downtown Egg Harbor for a future library/community center. The property was assessed at $413,000, but the Cowles family agreed to sell it in 2012 for $350,000 with the idea that the future village building would be dedicated to Cowles’ parents with the name Robert L. Cowles, Jr. and Margaret A. Cowles Center.

With the decision to move the building to another piece of village-owned property on Church Street, the village decided the naming rights deal was also off the table.

“We cut a deal,” Cowles said. “I’m asking the community to keep that commitment.”

However, Don Kress, husband of committee member Carol Kress and the person charged with fundraising for the new building, said “without naming rights, there’s no way to raise the kind of money you are looking for. A million dollar contributor who isn’t going to get naming rights? You might as well scrap it. I can’t raise it without naming rights.”

Cowles said he appreciates Kress’ view, but he said his family offered a substantial reduction in the price of the property in exchange for naming rights. “They came to me and asked for it,” he said. “It is somewhat emotional for me.”

“What we need is a decision so I can go to people,” Kress said.

Dickson, who also served on the village board, said the issue would be addressed at the next village board meeting at noon on Dec. 14.