The goal of Door County sisters Kim and Katie Sawyer was to place in the top 10 of last weekend’s Miss Wisconsin Pageant.

They did that, then the top five, then the top three. And finally, it was just Kim and Katie, waiting to see which would be crowned Miss Wisconsin. Their dad, John, said, “To the day I die, I’ll remember the two of them standing there face to face, holding hands, foreheads touching.” Asked later what they said to one another, they said, “We kept repeating, ‘It doesn’t matter who wins, we’re both winners.’ And then, ‘You know Mom is dying.’” 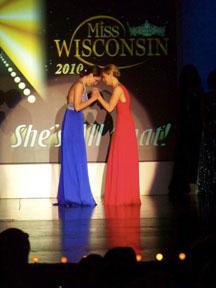 Sisters Kim and Katie Sawyer hold hands as they await the announcement of the winner of the Miss Wisconsin pageant. Photo contributed.

It was Kim, 23, Miss Green Bay, who was crowned Miss Wisconsin. Katie, 21, representing South Central, was first runner-up. Their mother, Jackie, said many in the huge crowd evidently didn’t realize the two finalists were related until the master of ceremonies said, “Here we go. Good luck, sisters!” Then, Jackie said, “A big ooooh went through the crowd, and the place erupted in cheers. Who would have dreamed in a million years that this could happen?”

Kim has a year’s leave of absence from her job as business analyst for a fuel consulting company in De Pere. She received the keys to a little red car with Miss Wisconsin on the side and expects to travel up to 30,000 miles in the coming year talking to children and adults about her personal platform, the importance of volunteerism. In 6 to 8 engagements a week she’ll also talk about the Children’s Miracle Network, the cause all Miss America Pageants support. Unfortunately, Miss Wisconsin is booked elsewhere on July 4, so she won’t be part of Door County festivities.

Katie will return to her senior year at University of Wisconsin-Green Bay and is considering entering the Sweetheart pageant in Illinois, to which every state’s first runner-up is invited. It’s likely she’ll also make another run for the Miss Wisconsin title.

Crystal Burke, the third Door County entry in the state competition, won the Education Award, based on her academic record in high school and her plan to major in education at Ripon College. Shirley Ehlers, executive director of the Miss Door County Pageant since it began 14 years ago, noted that for the seventh time in the past eight years, the local pageant raised more money for scholarships than anywhere else in the state. This year’s total was nearly $13,000.