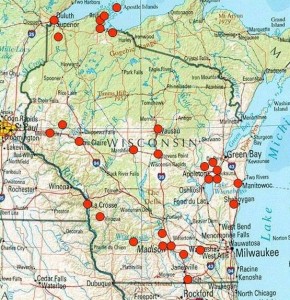 Other eco-municipalities in Wisconsin.

The idea for eco-municipalities began in Sweden in 1983 with the establishment of the first eco-municipality. The idea behind it is the community takes “a particular set of sustainability principles as guiding municipal policy,” according to the Institute for Economic Municipalities website.

There are four sustainability objectives:

2. Reduce dependence upon synthetic chemicals and other unnatural substances.

Washburn, Wis., became the first American city to adopt the eco-municipality principals with a city resolution in July 2005. Ashland, Wis., followed suit in September 2005 and Madison was next in December 2005.

Today Wisconsin has more eco-municipalities than any other state in the country.

“I often joke it must be something in the water,” said Jerry Hembd, associate professor and state specialist with the Northern Center for Community and Economic Development with the Department of Business and Economics at the University of Wisconsin Superior. “But I think it’s the power of example. A few communities started back in 2005-06, and strong advocates went around speaking about it and geared up additional interest. It just seemed to take off. It’s not the only framework but it’s one that seems to resonate with people in Wisconsin.”

Egg Harbor joining the ranks of eco-municipalities sort of happened by accident, said Michelle Anderson, who serves the village as deputy administrator/deputy clerk/deputy treasurer. She was assembling information to submit an application for Travel Green certification for the village when she ran across information about the eco-municipality program that seemed to align with practices already in place in the village.

“It involved many different things we, the Village of Egg Harbor have already tackled, like limiting the use of phosphorus, so for us it was quite easy,” she said. “Over the years the village board has taken steps to be a green municipality. I thought it would be a perfect fit.”

Nancy Fisher, who served on the village board from 2004 until deciding not to run for re-election in 2013, was there for many of the decisions that earned the eco-municipality and Travel Green designations.

“We just had a great board and a brand new administrator (Josh Van Lieshout) who wanted to see some of these same things happen,” Fisher said. “I think the timing was wonderful. Everybody had the opportunity to contribute ideas. From the get-go, our board really wanted to see some of these new ideas and technologies, like the permeable brick that we’ve been using for paving, that came on the market just about the same time we were upgrading the beach. So it was a nice confluence of our decisions to go in that direction.”

Hembd said he would like to see even more communities move toward eco-municipality status, “but as long as more communities are joining, it’s a sign of progress,” he said, adding that he hopes what happened in the Chequamegon Bay area (Ashland/Washburn/Bayfield) with various local governments working together as an eco-region happens elsewhere in the state.

“If that happened in Door County, it would be amazing,” he said.