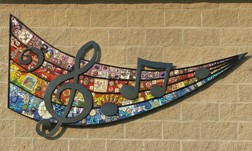 “Sunset Melody” was installed in 2012 at the Peg Egan Performing Arts Center in Egg Harbor.

When it comes to public art displays in Door County, the village of Egg Harbor created a class of its own, and on the way amassed a collection of creative works noticeable throughout the village. The village highlighted varied projects during the third annual Public Arts Reception, hosted by its Public Arts Committee (PAC), on May 16.

At the reception, the 2014 “EGG-stravaganza” project was announced. “EGG-stravaganza” will be a celebration of Egg Harbor village’s 50th anniversary; 50 large egg sculptures will be displayed throughout the village – details for the “call to public arts” can be seen on the village website, with prospectus. The submission deadline is July 31.

Currently, seven projects, either on loan or donated, adorn the village, using no public money. The committee hopes to set up a process for commissioned pieces. All current projects are cataloged in a village arts and walking-trail map, available at the village office.