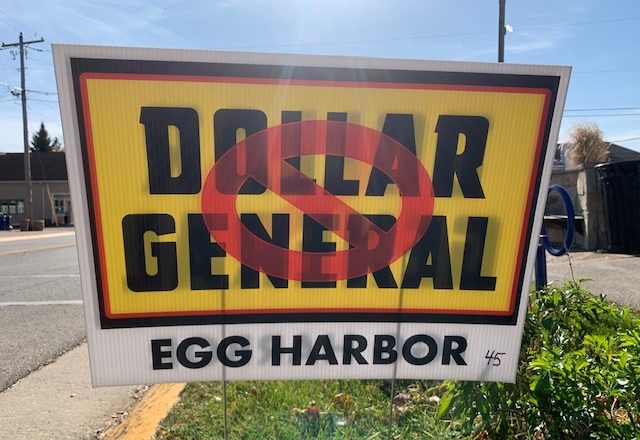 The Town of Egg Harbor rejected Dollar General’s proposal to build a location at the corner of Highway 42 and Hillside Road. Photo by Myles Dannhausen Jr.

The opposition prevailed Monday evening when the Egg Harbor Board of Supervisors unanimously denied a developer’s application to build a Dollar General store within the town at Highway 42 and Hillside Road next to the Egg Harbor Fun Park.

Traffic and safety concerns at the already busy intersection were the primary basis for the decision. The supervisors said access into the chain store’s parking lot would conflict with the town’s ordinance for roads and driveways. The ordinance allows the town to consider new driveways in relation to existing roads and driveways, reasonable circulation and topographical conditions. The Dollar General store’s driveway would have been constructed on Hillside Road about 112-feet off the two-lane Highway 42. Both roads have a 55 mph speed limit. A hill on Hillside Road also crests a short distance from where the parking lot driveway would have been located.

The supervisors at first considered requiring a traffic study. Supervisor Steve Schopf, former Fire Chief for the Egg Harbor Fire Department, said he had responded to plenty of accidents in the area. He feared the development would place a heavier load of traffic on the intersection.

“I don’t object to the project itself as far as commercial establishment, I just think we need more information in regard to a traffic study,” he said.

Supervisor Dale Wiegand took Schopf’s comments a step further by making the motion that was unanimously approved to outright deny the application based upon the town’s ordinance.

Town Attorney Randy Nesbitt confirmed the town’s right to deny the application based upon the road and driveway ordinance and the town’s authority under Wisconsin statutes to oversee town affairs. He also said the village powers the town had adopted in the past further empowered the board to control highways, streets and the good order of the town for the commercial benefit, health, safety and welfare of the public.

The developer, Peter Oleszczuk, of Midwest Property Development, had first proposed a Dollar General store within the Village of Sister Bay but was sent back to the drawing board over impervious surface issues in December 2019. Instead of returning, he introduced new plans for the Egg Harbor location in the fall of 2020.

Opposition to the Egg Harbor location arose immediately. Neighbors, residents and visitors were concerned that traffic safety issues would be created and that the discount chain store would harm local businesses and mar the natural beauty and rural character of the area. We Are Eggs Against Dollar General secured more than 3,000 signatures as of Monday evening on a petition opposing the chain store. During the public hearing Feb. 25, the Zoom call maxed out at 100 participants with others listening on the call-in option. Thirty-nine people spoke in opposition to the store, with only two favoring it. That count was 230 against and two for the store in the number of letters sent to the town.

“When there are 99.9% opposed, that’s overwhelming,” said Meg Stapleton, one of the founders of the opposition group and a Hillside Road resident, during the Monday evening meeting. She appealed to the elected supervisors to listen to the public and be “stewards of the unique rural character of the town.”

The Monday evening meeting drew a virtual Zoom crowd of 79 people. Only a handful were able to speak before the allotted 10 minutes of public comment had concluded. The participants wanted more time to speak, but Town Board Chair Paul Peterson kept firm to the town’s usual format. He said the public hearing held in late February gave participants plenty of time to express their opinions. When participants continued to object and press for time — “My God, this is a joke,” Peterson said — the chair required them to mute themselves.

Oleszczuk asked the supervisors at the beginning of the meeting not to focus on who the user of the space would be — Dollar General — but on the merits of the commercial application.

“We’ve been through all the reviews and believe we comply with the ordinance and also with the comprehensive plan,” he said.

Oleszczuk tried to speak when the supervisors were discussing the traffic flow and safety issues, but the motion was on the floor and Peterson prevented his comments. After the vote, Oleszczuk again tried to comment but this time he was drowned out by participants who told him to go home and that he wasn’t wanted in Door County. His face soon disappeared from the Zoom call.