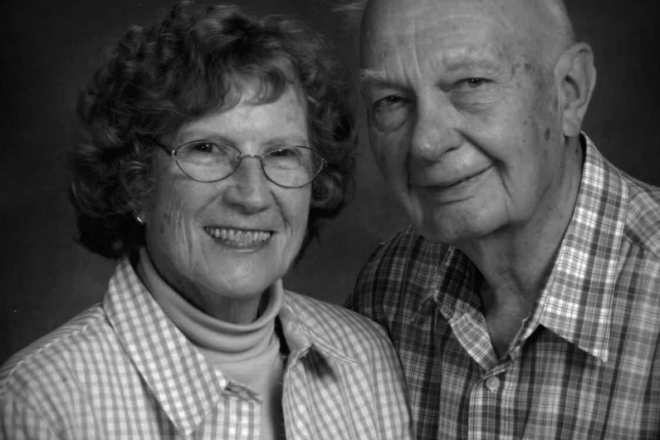 Mary Lou Breen and Bob Ossyra met at Beaumont High School in St. Louis and graduated together in the Class of 1941, just months before the U.S. entered WWII.

Bob went on to a trade school to become a welder, while Mary Lou and her girlfriends did their part for the war effort.

“We loved to dance,” she said, “so we spent a lot of time at the USO dancing with the soldiers passing through St. Louis. One of the nice young men I met was named Bob.

It was not Bob the dancer, but Bob Ossyra, whom Mary Lou hadn’t seen since graduation 19 months earlier, asking for a date to go rollerskating. Things rolled right along, and they were married just five months later on June 26, 1943, in a formal ceremony at Our Lady of Perpetual Help Catholic Church, with a reception at a hotel near Forest Park, whose name neither of them can remember. They still hear from Lou Myers, one of the groomsmen. The newlyweds spent one night in a hotel and attended mass the next morning at St. Louis Cathedral.

Bob’s parents operated the restaurant and bar at the popular Chain of Rocks Amusement Park on a cliff above the Mississippi River (home of the Swooper, an oblong Ferris wheel). Mary Lou’s dad was a mounted policeman in the city. She still has his billy club. Both families approved of the teenagers’ marriage – they were 18 and 19 – but Mary Lou’s aunt Eleanor said, “It’ll never work!” 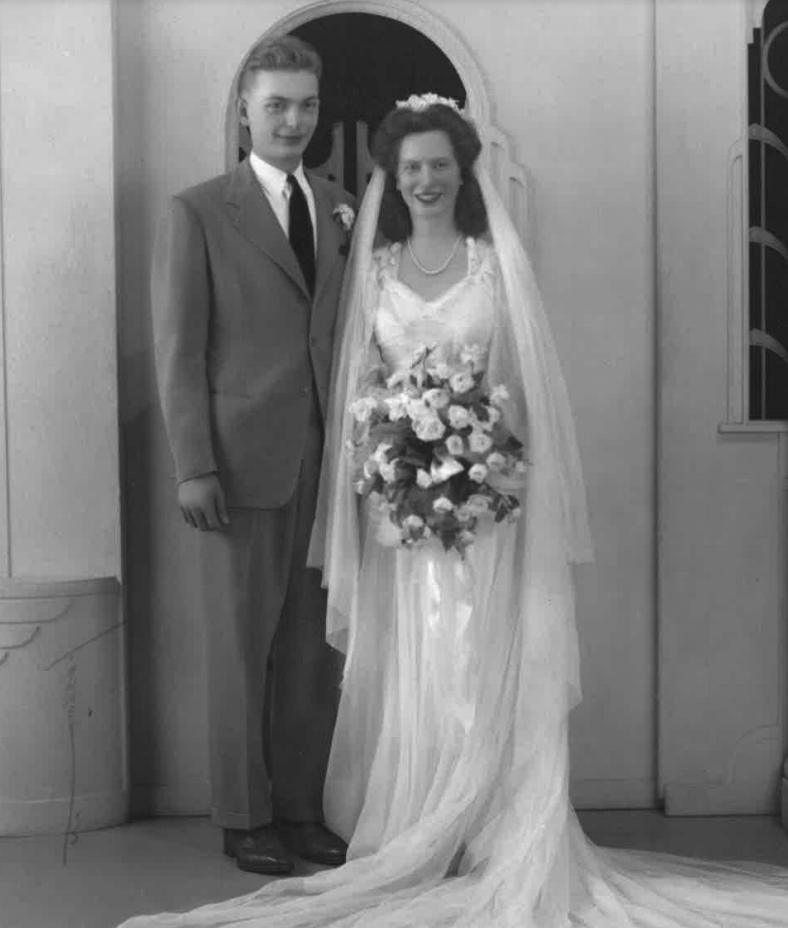 The couple’s two oldest children, Barbara and Bob, were born in St. Louis, where Bob continued to work before entering the military. (He recalls that it took two years to pay for the new refrigerator they purchased.) Later, Mary Lou and the children traveled with him as he spent three years in the Air Force as an airplane mechanic, stationed in Nebraska and New Mexico, with additional training at schools in Mississippi and California.

The family moved back to St. Louis while Bob attended Washington University on the GI Bill and completed a degree in chemical engineering. Bill and Mike, their second and third sons, were born in Frederick, Maryland, and Pine Bluff, Arkansas, during the three years Bob worked in a government research job. In 1953, he went to work for Amoco and spent the next 30 years in the company’s offices in Seymour, Indiana, where Jim, John and Mary Anne were born, and in Chicago, finally serving as head of the division that oversaw five plants that manufactured plastic piping from raw materials produced by Amoco.

He retired in 1983 and, like so many people who heard about Door County, he and Mary Lou vacationed here, fell in love with it “and never looked back.” In 1984, they built a house on eight wooded acres with 200 feet of beach, just a quarter-mile south of the Northport Pier.

Fifteen years ago, when the couple began to feel a little isolated in far north county, they purchased a spec home in a new subdivision in Egg Harbor. The two-story house is filled with the products of their hobbies. Bob, a master woodworker with a fine shop in the garage, has built and hand carved much of the furniture from trees cut on their Ellison Bay property.

“There’s not a room in the house that doesn’t have something he’s made in it,” Mary Lou said. Her ceramics and framed needlepoint pieces are also much in evidence.

They are active in Stella Maris Parish, love to watch the birds at feeders outside their dining room and enjoy crosswords and Sudoku puzzles. They used to travel with friends, driving to both coasts and crossing Canada by train, and they played bridge regularly until the last few years. While they don’t eat out as often as they once did, Coyote Roadhouse and Cornerstone Pub are favorite places.

The couple’s seven children, five boys bracketed by older and younger sisters, are:  Barbara Martin, Sister Bay; Bob; Bill (Maureen), Wilmette, Ill.; Mike (Kim), Corona, Cali.; Jim (Carol), Evanston, Ill.; John (Shu), Libertyville, Ill.; and Mary Anne Moczinski, Lindenhurst, Ill. (There was a bit of a debate about the town where Mary Anne lives, but Bob, who thought Lindenhurst didn’t sound right, conceded when it was verified, in his own handwriting in the address book. They both chuckled, and Mary Lou said, “See, that’s how you get along for 75 years! There is a lot of laughter in this house.”)

They have six granddaughters, five grandsons and two great-grandsons. “We’ve been blessed,” Mary Lou said. “We love them all.”

On June 23, a crowd of 50 to 60 relatives and friends from Germany, California, Virginia, Wisconsin, Illinois, Missouri and Tennessee – including all seven children and spouses, 11 grandchildren and spouses and the two great-grandchildren – will celebrate the life Mary Lou and Bob have lived at Maxwelton Braes in Baileys Harbor.

Asked how their marriage has been so successful, Bob said, “Well, nobody lives this long without some arguments.” And Mary Lou quipped, “And I say, forget about it!”

On June 26, the Ossyras will observe their 75th anniversary. Aunt Eleanor was badly mistaken.