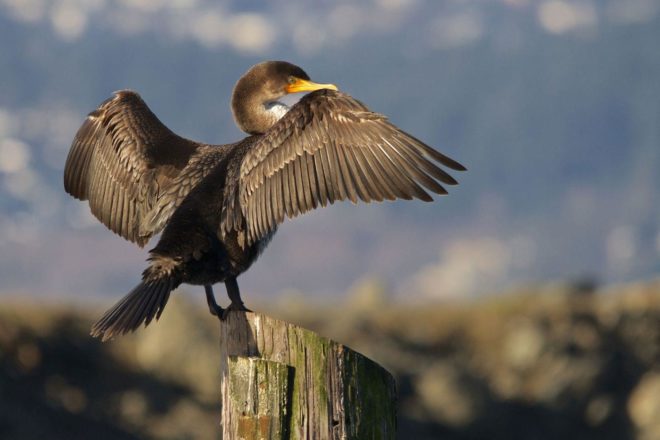 When Jeff Raduechel arrived at his Anchorage Cove condo in Egg Harbor for a long weekend at the end of April, it sounded like a military siege was underway.

“I became aware of what sounded like gunfire, every three to four minutes, regular and loud,” he said. “At first I thought someone was blasting for a foundation or dock work, but it was so frequent, that couldn’t be the case. It sounded like the fireworks sound on the Fourth of July. Then the sound is bouncing off the bluff. That’s why it was so obnoxious. You couldn’t avoid being aware of it. It was in your face.”

It wasn’t until the next day that he determined the constant firing was coming from Hat Island, an eight-acre, privately owned island about three miles west of the Egg Harbor shore. With binoculars, Raduechel noticed that every time the sound was made, a big cloud of birds took off.

“I was there that weekend Wednesday through late Sunday, and this cannon fire was constant, every three to four minutes, both night and day,” he said. “Everybody [in the village] was talking about it, but nobody knew where it was coming from.”

Raduechel said he talked to his neighbor, Steve Hamming, owner of Harbor Hardware, and learned the sounds were not only driving him nuts but were causing his dogs to howl all night.

“I can look at the island from where I am. I live on the water,” Hamming said. “It’s annoying, especially at 4 in the morning. I can’t even have a window open in the house. All you hear is the bang, bang, bang. I’ve been up here a long time, and I’ve never heard that before.”

That started Raduechel off on a number of telephone calls, including the Door County Sheriff’s Department, from which he learned that he was not the only one to call about the disturbing noises; and Department of Natural Resources Warden Mike Neal, who said his answering machine was full of complaints about the noise from Hat Island.

“I’ve been hearing complaints about it daily,” Neal said.

After an investigation, Neal learned that his own department had contracted with the United States Department of Agriculture for a wildlife-abatement program on Hat Island that uses the recurring blasts to disturb and displace the nesting cormorants.

“I was shocked when I talked to Mike Neal and found out the island is privately owned,” Raduechel said. “I assumed it was a wildlife refuge because of the thousands of birds. It’s shocking how many birds are out there.”

Neal said the cannons are used to disturb nesting cormorants on other Door County islands, and they have been used in the past on Hat Island, but it has been a while. In addition to the cannons, vegetable oil is used on the cormorant eggs to prevent them from hatching.

Raduechel said he also spoke with Betsy Galbraith, who is in charge of Natural Resource Damage Assessment with the U.S. Fish & Wildlife office in Green Bay. She informed the USDA of complaints from residents about the noise and said USDA personnel will attempt to make adjustments.

Raduechel said it did sound like the cannons were now being fired toward Michigan rather than Egg Harbor. Hamming said that seemed to be the case, but on Wednesday the sound seemed to be aimed right at Egg Harbor again.