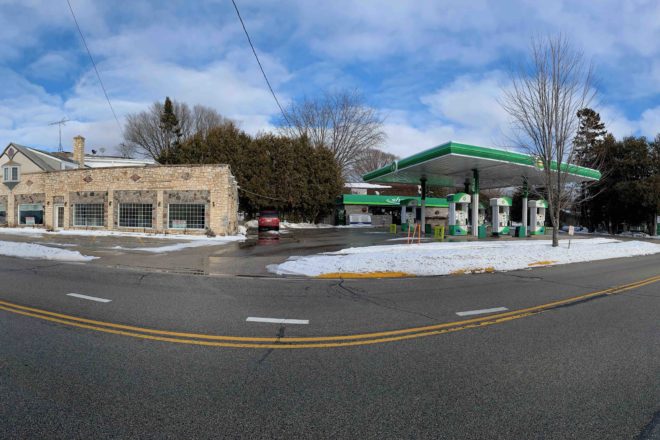 The Mueller Mini Mart property in Egg Harbor has been for sale for several years. Photo by Myles Dannhausen Jr.

The Egg Harbor Plan Commission reviewed a proposal for a 27-unit condominium and retail project in the center of the village during its Tuesday meeting. The proposal requires a conditional use permit from the village to move forward.

The Residences at Egg Harbor would be located on the site of what is now Mueller’s Mini Mart, across the street from Shipwrecked Brew Pub. The location has been a gas and service station for much of the last century, but the property has been for sale for several years. Longtime owner Robert Mueller died Jan. 7.

The proposal includes use of stone to match the old Birnschein gas station that stands on the north side of the lot, but the existing buildings would be razed to make way for the new development.

Developer Mike Schwantes of Creative Business Services outlined a project that would include what he called “work/live” retail units of 1,566 to 1,621 square feet on the first floor, and a mix of one-, two- and three-bedroom condominiums on the upper floors, ranging in price from $200,000 to $800,000. It would also include underground parking and a rooftop viewing deck.

“We wanted a design that would fit what Egg Harbor residents would enjoy,” Schwantes said. “We want the building to fit.”

Schwantes said he canvassed many Egg Harbor residents and business owners during the last year to find out what they would want to see in that location.

The live/work spaces would offer an opportunity for people to open small storefronts on the street, with living space in back. Plan commissioner Kathy Navis and others said they would prefer those spaces be used for retail rather than office space.

The building would reach the village’s maximum height of 35 feet – the same height as Greens N Grains and Shipwrecked, and similar to neighboring Mojo Rosa’s. Architect Rick Fisher of Fisher and Associates is also seeking a variance to exceed that height to provide handicapped access to the rooftop via an elevator.

Though the development would add more than two dozen residential units to the center of the village, Schwantes said the change in use would likely ease congestion by eliminating the current vehicle entry and exit from the gas station throughout the day.

The proposed site plan includes 56 parking spaces: 28 in the basement and 28 on the surface. Fisher said his desire was not to lean on a village ordinance that allows a development to include street spaces within 500 feet of a business as part of its parking requirement.

The initial proposal used angled street parking along Highway 42 for retail shoppers, but commissioners balked at the idea of cars backing onto the highway. It is also unclear whether the Wisconsin Department of Transportation (DOT) would allow that parking arrangement along a state highway.

The Plan Commission responded favorably to the general proposal, but it asked the developers to address several concerns during a follow-up meeting March 11 at the Kress Pavilion. These concerns include: