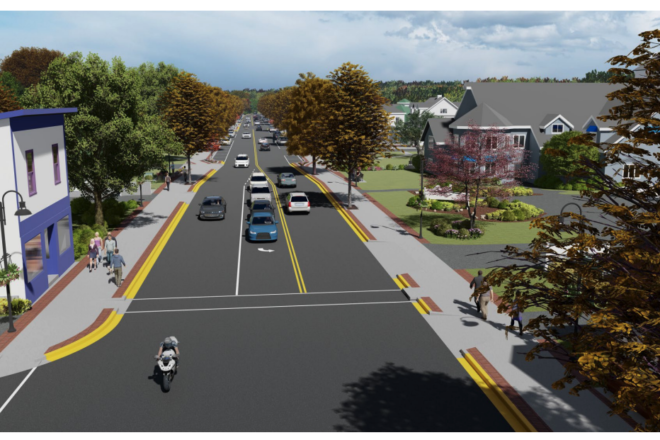 A rendering of the proposal for part of the highway 42 reconstruction project in downtown Egg Harbor. The plan drew many objections to the left-hand turn lane proposed southbound into the Main Street Shops, and to the removal of on-street parking in the core area. Source: Village of Egg Harbor.

Comments are being taken until Jan. 25

A recording of the meeting about the Village of Egg Harbor’s Highway 42 project, as well as the village’s presentations and the project plans, can be found at villageofeggharbor.org. The village is taking comments on those plans until 5 pm on Wednesday, Jan. 25, by email at [email protected] or at the village office, 7860 Hwy 42.

Egg Harbor officials – flanked by numerous engineering, planning and design consultants – spent several hours Wednesday evening going over their plans for the state highway that runs through the heart of the village.

The presentations were followed by a public-comment period, creating a meeting of three hours and 18 minutes for the approximately 55 people who attended, plus an online, virtual crowd that topped out at 71 people and dwindled as the evening wore on. It was just the latest rendition of the planning process that began in 2015 that was originally slated to be completed by 2022. The village previously requested the state delay the project to allow time to wrap additional improvements into the plan, then it was delayed again this year for the Department of Natural Resources to determine if there was dwarf lake iris habitat in the area.

John Heller, village board president, said they will review all comments, and “that will affect the final design.”

Once all comments are received by Jan. 25, the planning consultants will summarize recommendations and items for further consideration to be submitted to the village’s Parks and Public Works Committee and the village board to review, discuss and finalize. All village meetings are open to the public and include open-session periods to receive public comment.

Those with specific property concerns should contact staff to set up a meeting by emailing village administrator Megan Sawyer at [email protected].

The village will authorize the project to be advertised for bids in March or April. Though the project may be awarded by the end of 2023, the timeline for construction would be 2024, said Mike Simon, project engineer with McMahon Associates.

The state Department of Transportation is milling and resurfacing about seven miles of Highway 42 from Rainbow Ridge Court south of the village to Bluff Lane in the Town of Gibraltar – a project scheduled for 2024. The Village of Egg Harbor is piggybacking its improvements with the state’s.

Sawyer said the overarching purpose is to replace and enhance aging and deteriorating infrastructure while enhancing safety, walkability, connectivity, parking and aesthetics. She said the improvements were intended to ease congestion and calm traffic on a state road that travels through the village but over which the village has no authority.

“We’re hoping these will naturally lower speeds,” she said.

The village received a $1.38 million Transportation Alternative Project (TAP) grant for what’s being referred to as the north and south segments.

The south segment from South Trail to Harbor School Road, and the north portion from County E to Church Street/Harbor Heights, will receive the same urbanized treatment, with bike lanes, curb and gutter, five-foot sidewalks, five-foot green terraces, street lighting, adjusted utility poles, trees and bike lanes on both sides of the road. That plan had received criticism in August when property owners realized the extent of the urbanization planned for the areas.

The core part of the project runs from Harbor School Road to County E and includes a five-foot sidewalk, a five-foot paved terrace, trees, lighting and buried utility lines.

Three left-turn lanes are included in the project: northbound at County G and again at White Cliff Road, and southbound at the Main Street Shops.

The bump-outs will be removed and crosswalks improved. Additional parking will be added for a net gain of 64 parking spaces – 48 of those as new, on-street spaces, and the remaining 16 additional spaces through a reconfiguration of the Bertschinger Community Center parking lot.

Village trustee Ken Mathys said that after the August 2021 meeting on the plan, the village was approached by a group of property owners who “had real concerns and fears about the loss of trees” in the north area. He said they met with each of the property owners, measured and had a survey done of the trees. They ended up identifying and marking 157 trees of concern. Of those, 99 are marked to be saved with green tags, and 58 identified for removal are marked with yellow tags.

They also hired Tom Wolfe – an arborist and horticulturist who designed and installed landscapes for places such as the Chicago Art Institute and the Shedd Aquarium – to come up with the street tree plan.

Wolfe said between 37 and 40 of the trees marked for removal are ash trees that would need to be removed anyway so that they don’t become hosts for the emerald ash borer.

Mathys said that of the trees that will be removed, 18 are in the core area.

“We can’t do anything about it,” he said. “We’re going to bury utilities.”

All will be planted in Cornell University soil, Wolfe said, which will give them the best possible start. He said it will take about five years for the 18-foot trees to establish, and within 25-30 years, they will reach their mature height. The street trees throughout the core area today were planted the last time the village dramatically remade its downtown in 1990.

“The best time to plant a tree was 30 years ago,” he said. “The second-best time is when the sun comes up tomorrow.”

Objections to Turn-lane and Parking Loss in the Core Area

Twenty-eight people made comments during the public-comment period. They asked about trees, stormwater runoff, lighting, maintenance, crosswalks and softening the concrete at the village’s center at Harbor View Park. Several people thanked the village for putting so much time and resources into the plan. Almost half the comments pertained to the left-hand turn lane southbound into the Main Street Shops, and the removal of the on-site parking from Greens ’N Grains to north of Parador.

“Those 12 parking spaces on the highway between White Cliff Road and Parador are essential for my business to survive,” said Kathy Navis, owner of Greens ’N Grains. “So if this plan goes through, I can’t visualize how I stay in business.”

Several people said they relied on stores in Egg Harbor like Greens ‘N Grains, and access that didn’t require lugging bags blocks away. Not even deliveries to the businesses that would lose on-street parking would be able to access them without two-wheeling carts a block and a half.

A couple of people said that what’s good for improving overall traffic flow and accessibility for tourists isn’t necessarily the best plan for businesses that make a living on Highway 42. They also said the left-hand turn lane would not calm traffic; it would instead help speed it up by allowing motorists to pass on the right.

“Eliminating the parking down by Greens ’N Grains, all you’re going to do is speed up traffic there,” said Al Lohman, who owns Grumpy’s Ice Cream, which is located in the core area just south of Casey’s BBQ.

“What’s wrong with cars slowing down,” Navis said. “When you have all of these statements that you want to have traffic calming, you want traffic to slow down, and then you create a situation to speed up traffic. Because that’s what that third lane is. It’s to prevent congestion, which means traffic is slowing down.”

Simon, the project engineer with McMahon Associates, said the removal of the parking in the core area and the left-hand turn lane were intended to reduce congestion and improve safety. He called the congestion “significant,” based on traffic counts the state did in 2015 and 2018 on peak summer average daily traffic of 13,000-14,000 vehicles.

“That’s a lot of traffic for a two-lane road,” he said.

Others said the village was congested only a few weekends out of the year, and that wasn’t necessarily a bad thing, given that it forced motorists and pedestrians to take their time. Some questioned why improvements were made based on traffic counts done during peak tourist months.

“The traffic studies were done in July and August,” said Judith Ortiz, commenting virtually. “The rest of the year, we need those parking spots; we don’t need turn lanes. And the turn lanes are just going to get the traffic through faster, which I think is not necessarily what we want to do.”

Simon said the road is a state road and on the national highway system, and they are the ones who establish when to do the traffic counts.

Mathys asked one of the village’s consultants, Dominic Marlow, a planner and urban designer with Graef, whether the turn lane would increase speeds through the village.

“In general, roadway widening and additional space and open space is what we understand to be one of the bigger contributors to increase vehicle speeds,” Marlow said.

The road won’t be wider – 12 feet now and 12 feet as proposed – but the additional four feet to the curb that’s there now is for on-street parking. In the new version, that open area is for right-hand passing or bike accommodations.

There is the potential then, Marlow said, of worsening the problem. But there are solutions to make the left-hand turn lane seem less open.

“If it’s not a turn lane, there are very few alternatives to address the congestion issue at present,” he said. “So we’re talking about trading a solvable problem for a less-solvable problem.”