Egg Harbor’s municipal dock is crumbling, and when voters head to the polls May 26, they’ll be deciding whether a marina remains a part of the village in the near future. 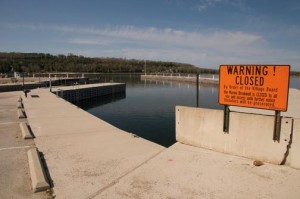 The main pier of the Egg Harbor Marina has been closed for good by the village board due to liability concerns.

The village has developed a proposal for a 63-slip marina at a cost of no more than $6.6 million. Egg Harbor was awarded a grant for $1.185 million from the Wisconsin Waterways Commission last year for the project, bringing the cost down to $5.415 million. The existing marina has 35 – 40 slips, depending on boat size and water levels.

“This is the most important vote in the village of Egg Harbor since the decision to incorporate in 1964,” says Egg Harbor Village President Nancy Fisher.

Fisher’s dramatic proclamation is based on the village’s decision that it will never re-open the existing pier. That conclusion was reached on the backs of recommendations from three independent engineers that said the structure was unsound. The village board said it was opening itself up to massive liability concerns by continuing to operate the pier in full knowledge of the problems.

“We have a greater liability than many might expect if something happens there,” said village administrator Josh Van Lieshout. 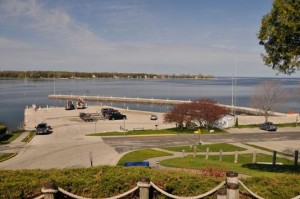 The plan up for a vote May 26 includes the addition of 21 slips and improvements to the upland area.

The pier, built in 1974, is deteriorating from the inside out. The concrete slab is in good enough shape, engineers say, but the rubble fill and cribbing under the slab are falling apart. Photos show large holes where there should be fill and broken beams. Attempts to jack up the slab, fill the holes, and reconstruct the pier in 2005 were unsuccessful.

Mike Kahr, who worked on the pier in 2005 and owns Death’s Door Marine, said the pier has serious problems, but it’s not in imminent danger of falling over.

“There is a possibility of it tipping over in a bad enough storm,” he said. “Now, a storm that bad typically only happens in fall or winter, when boats aren’t there. But would I tie my boat up out there and walk on that pier in a major storm? No.”

Mike Fitzgerald, an Egg Harbor Village Trustee and the Chairman of the Harbor Committee, said the committee has looked into a reconstruct option and determined it’s not feasible. Wave tests showed that a steel wrap around the pier wouldn’t work because wave impact would infringe on neighboring riparian rights. There are also questions of whether the steel could be driven into the bedrock.

“Even if it were feasible, it would accommodate just 20 modern slips,” Fitzgerald said. “You’d be losing too much revenue. The DNR has determined that the breakwall should be rebuilt, and if we didn’t do that, we’d be doing a disservice to the taxpayers.”

Kahr said reconstruction isn’t impossible, but there aren’t grant dollars available for it.

The existing pier, built in 1974, is crumbling under the concrete slab.

He said the breakwall could be wrapped in metal sheeting with rock around it to lessen wave impacts at a cost of $2.6 million. But that estimate did not include improvements to finger piers, upland grounds, and amenities, or moving gas tanks. It also did not include costs of permitting and revenues lost while waiting up to two years for permits from the DNR to do a reconstruct. A reconstruct, if it could be done at that price, would not produce any new revenues for the village.

The village determined that a reconstruct, if possible, would actually cost more in the long run than building a new, expanded marina.

Figures provided by the village estimated a reconstruct would cost at least $4.8 million in a best-case scenario. This included costs beyond breakwall work mentioned above. Construction of a new marina is capped at $6.6 million. However, a reconstruct is not eligible for grants, and the village has already won the $1.185 million grant for the new marina, bringing the cost to $5.415 million. When increased revenues from an expanded marina (21 more slips) are figured in, the new marina costs nearly half a million dollars less than a reconstructed marina after 20 years.

Bruce Hill, former village president and owner of the Lull-Abi Inn, was critical of the village board’s early handling of the project, but is now supportive.

Hill called the plan better and more affordable than any other solution presented.

Fitzgerald said he’s heard unfounded concerns that fishing would not be allowed on the new breakwall.

“I have been adamant that people will still be fishing off the breakwall and will still be able to fish off the finger piers as they always have,” Fitzgerald said.

The proposed marina would include 28 slips of 40 feet or larger. Fitzgerald said the slip breakout reflects the harbor’s current customer base and wait list. Last year, Van Lieshout said there were just four boats of 25 feet or less in the marina.

“Yes, it will impact taxes some, but our property values are also boosted by the presence of the harbor down there,” Hill said.

Van Lieshout said the present marina has an estimated annual economic impact of $3.6 million on the area. The new marina would have a $4.081 million economic impact.

“We need and depend on the marina for business,” Fisher said.

With the large pier closed this summer, the harbor will operate at about 30 percent capacity, a net loss of about $25,000 for the town.

Cost:  $6.6 million ($1.185 funded by a grant, bringing the cost to $5.485 million. The village has applied for nine other grants, but is not assured of any further grant funding.)

Village of Egg Harbor voters will vote YES or NO on the following question May 26.