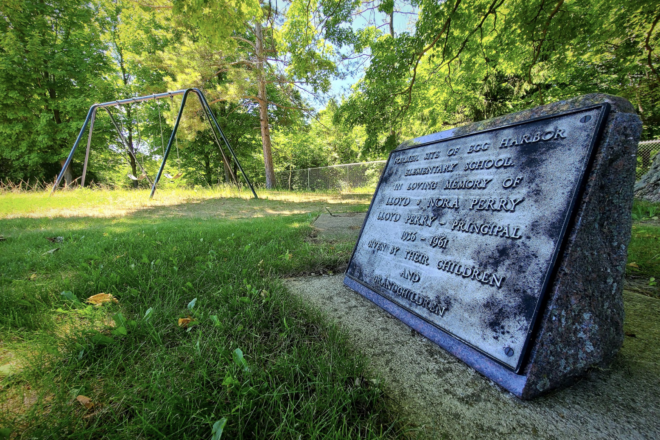 Part of the proposed dog-park reconfiguration extends onto a portion of town-owned land that’s currently a playground and the former site of Egg Harbor School. Photo by Sara Rae Lancaster.

The Town of Egg Harbor has decided that further discussion is needed before it can weigh in on the Village of Egg Harbor’s proposal to reconfigure Harbor Hounds Dog Park to extend into a portion of town-owned land.

Lisa Van Laanen, village trustee and chair of the village’s Parks and Public Works Committee, presented the reconfiguration plans to a joint meeting of the Egg Harbor village and town boards June 10. The proposed reconfiguration would extend the park to the east onto town property that is currently the playground area west of Fire Station #1 and the former site of Egg Harbor School.

The reconfiguration of the dog park stems from the village’s Church Street road project. The approximately $2.6 million project will add parking along the street, sidewalks, street lighting and bike lanes. As part of that project, a stormwater-retention pond will swallow a large area of the existing dog park, severely limiting its overall size.

“Instead of relocating the dog park entirely, the village is looking to expand on a portion of town property for several reasons,” said Megan Sawyer, village administrator.

Making use of the existing infrastructure, not losing the shade provided at the current location and creating less of a change for dog-park users were some of the reasons behind the proposed reconfiguration, Sawyer said. The project would have no impact on the town budget, and the village would continue to maintain the dog park.

“If we can’t extend the fence eastward to the town side, the dog park becomes unusable because of the reduced size,” Van Laanen said after presenting the plans during the joint meeting.

The historical significance of the proposed location spurred questions about whether other viable locations exist. Although Egg Harbor School was demolished in the late 1970s, the property features a memorial plaque to the former principal, Lloyd Perry.

Prior to last Thursday’s meeting, the Egg Harbor Historical Society sent a letter to the village and town boards requesting that they consider another location for the expansion, citing the historical significance of the playground.

“Restoring authenticity and character to our communities is one of the goals of our tourism leaders,” the letter stated. “Respect for historic sites such as pioneer schools and cemeteries are ways to do that. Cannibalizing a historic site for a dog park is not the way to express the authenticity of our community.”

Van Laanen said the Parks and Public Works Committee found no viable locations other than what was proposed.

Egg Harbor Town Chair Paul Peterson said the town board had not yet received enough information or had a chance to discuss the plans as a board in order to give the village a final answer. Instead, the town board will discuss the proposed reconfiguration during its meeting on Monday, June 21.

“When we discuss it as a board on Monday, that is when we will look at the information and be able to see what additional questions we have,” Peterson said.